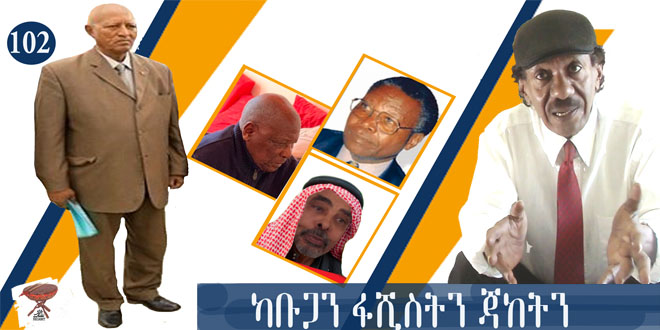 I know when what comes on Negarit hurts them because they go berserk with their insults. The last episode really made them mad—and I couldn’t differentiate between PFDJ cults and the fascist cult. They reacted the same—insults and jingoism, as usual. I know the sickness is inflicted by the 800 years of Kbre Negest indoctrination; someday I may dissect that despicable document.

Sensitivity by extension and affiliation

In a modern secular society, citizens are individually responsible for what they do—they must be denied refuge in their ethnic or sect group. Also, no one should believe those who share the identity of a culprit bear responsibility because one of their own committed a crime. In such instances, in the eyes of the law, anyone is on his own; individuals answer for their transgressions alone. Equally, victimized citizens should identify their target individually, and not incriminate innocent people by affiliation or because they share a similar identity with the victimizer. And importantly, if individuals are challenged or accused, those whose identity or partisan affiliations they share, must not have knee-jerk reactions and jump to defend them.

So far, from my observation, I have much praise for the young and the principled, they are better equipped to think rationally and not be swayed by racist and hateful primordial agitation. However, those calcified individuals with primitive mentality must be confronted when they spread hate. Sadly, in some agitators have found fertile grounds in our primitive and unenlightened society. Naturally, their agitation has a better reception among the uneducated and among the badly indoctrinated haters. And indeed, they make their relatives, their friends and those who know them, uncomfortable. They embarrass them.

To the agitators I say: those you consider an easy push are not so, they are half  your compatriots—don’t steer ethnic hate and sectarian divide—you better be sure your crimes will haunt you. If you do not mend your ways, you will face the wrath of some laws.

After 26 years on the run, last May Felicien Kabuga who used a fake identity to escape arrest was apprehended by the French police while hiding in Paris. In the mid 1990s, the USA has put a rewards of $5million for information that would lead to his arrest. Kabuga was one of the key men who directed the Rwandan genocide in 1994 where 800,000 Rwandans were killed. Kabuga instigated the killings and sustained it by financing the purchase of hundreds of thousands of machetes that he distributed to the murderers. His RTLM radio managed a network on informers who identified where Tutsis were and told its mobs to go to the places and finish off the Tutsis. Those who are walking the road on which Kabuga walked must know they will share his destiny.

Thank You, now let’s go back to work

Awate’s Achievements: Last week PEN Eritrea honored me, Thank you all. But I have to say this: if I did anything worth that, I was just a conductor. All my friends and colleagues, my readers and my sons and daughters share the honor. In a bigger sense, all victims of the regime share it because in a way, my cause and your cause is about advocating for the freedom and dignity of all Eritrea, no specific region, religion, or party. All citizens. Congratulations to all. Now we are done with the celebrations and congratulations, let’s go back to work .

But let me state the following. If there is one thing I am most proud of is my record when it comes to sectarian and regional, or any other dirt—I am free from all of that and my record speaks for itself. However, as evil as they are the fascist-PFDJ duo want to defame me on the most established part of my character which is free from bigotry, racism and sectarianism.

The most stellar achievement of awate and mine is our ability to assemble a diverse team of writers, readers and friends—it is the exemplary achievements of the larger family of Awate.com and my circle of friends. It’s my pride. And here is my challenge: no Eritreans entity, even the tyranny in Eritrea that runs tens of websites, television and radios, can match its achievements in that regard. None. That is bitter but you have no other choice except to swallow it.

Over the last two weeks I shed some light on how shabbily many of the PFDJ officials dress. I raised the matter twice and I didn’t think I will raise it for a third time. But I was provoked by the shabby dress of the Eritrean ambassador to Ethiopia. Why do they insist of wearing jackets three sizes larger?

I would like to express my appreciation for what my friends at Qursi Bun are doing. They have started to do educational segments to help in the quest of awareness and enlightenment that they present in an amazingly simple manner. Please visit their channel and subscribe. You will thank me for telling you that.

But what do we make of those who cling to the old superstitious and primitive thoughts uncritically? Why do the fascists consider language a tool of hegemony and empty pride and an attack weapon? Isn’t language primarily a communication tool… for educating, dialogue and understanding? Isn’t it a vehicle for acquiring knowledge to get closer to the causes of humanity and to achieve a true a cultural awakening? Why do the fascists make it a wedge issue?

Imagine some English persons campaigning to take their society back 400 years so that they can speak in Shakespearean English? I am sure people will consider them nut-cases. Imagine a modern society going back to Shakespeare age and mimicking the language of the era, of 400 years ago! Our fascists are worse, they want to take the society back thrice as much, to the days when Moses preached. So, while I see educated people trying to expand the horizon of Tigrinya to help their people come of age and ride on modern technology, the detractors are promoting language as a tool of hegemony, as a tool of fascist agitation and as a tool for ethnic strife.

I see naive social media entries asking for Tigrinya translation of foreign words–what should we call Ice Cream in Tigrinya? Then someone suggests answers ranging from ‘ዝሑል ሕልበት, to ምቅርቲ በረድ, hbsti bered, zHul cake, etc. I usually stop when it becomes so hilarious. Then, what do we do with the medical, technological and other scientific terminologies?

Most living languages today boast of dictionaries that contain hundreds of thousands of words, and we can only show a tiny fraction of that.

Languages evolve, they adopt foreign words and sometimes they drop their words and replace them with foreign ones. That is what a vibrant culture and a living language does—interacts with other languages and cultures and picks what is beneficial. A dead language never improves but is slowly taken over by other languages. They all begin as a basic communication tool. Languages didn’t invent culture, it’s part of culture. And cultures die if they doesn’t adopt to the changes of the time. Incidentally, English has the most loanwords and that’s why it’s rich; now it loans words to the other world languages.

Language is a wonderful tool to be politicized. It should be left to compete in a free market of languages. Unnecessary conservative protectionist attitude is not good for the economy or language, it is isolationist, the way the fascists want to build a wall around themselves—even the Chinese who built the great wall of China have smashed it and adopted to open connection with the world—the wall is now a tourist attraction, not a military defense structure. Just like the way we dress and the way we eat, languages should be left to flourish on their own merits. And people should not be fooled into believing there is good and bad languages. The truth is, there are poor and rich languages; it’s not decided wishfully but there are standard measurements to decide that. And those who borrow flourish those that don’t become bankrupt.

Now, what should we call Algebra in Tigrinya? We can’t keep using an Arabic word! Let’s call it Jebbere or Gebere. That is not a vulgar explanation as someone who thinks and spreads ignorance, by preaching the sources of words are inspired by nouns and verbs involving the human organs below the waist.

NB: this is a rough transcription of my Negarit #102 video on YouTube.