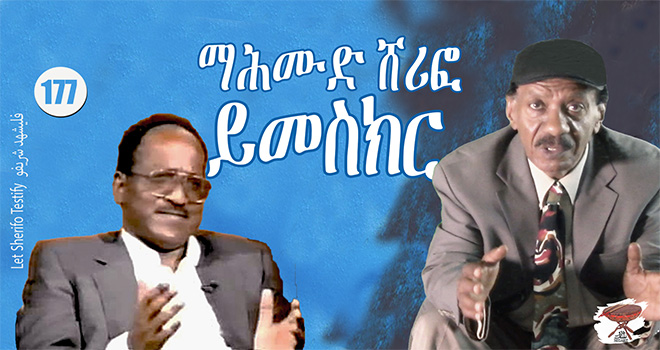 I am sure you must remember Mahmmed Sherifo. Certainly, you remember the reformers. Were they reformers… or something else! And how is the constitution tied to their arrest! Lastly, what’s the foundation of a constitution!

This topic includes two parts. It’s an important topic and I believe it will help many who might be confused and can’t understand the twisted arguments surrounding it.

I believe the crisis started with the hindering of Sherifo’s job of drafting the party formation laws that led to his arrest. And since the foundations were not laid down properly, what Eritreans are suffering from is the PFDJ’s insistence to continue to rule the country with its struggle era structure, refusing to pave the way for reconciliation that would have transformed Eritrea into a country ruled by a civilian government.

The debacle proved to all that the ruling organization disregards the rights of Eritreans and rules them like its serfs. Today’s Negarit 177 is an introduction and argues that a constitution, totally solicited and owned by a single party should be rejected, together with its sponsor.

In the next part I will narrate all the events that led to the arrest of Sheriffo (in particular) and his colleagues, the G15.

A constitution is neither one specific thing nor everything; it should contain fundamental principles and values that dictates how a state should be governed. It’s the “principles and laws of a nation, state, or social group… a set of rules that guides how these entities should operate.” It lays down the rules about power–who wields it and over whom it is wielded in the governing of a country.

Let’s consider a Football analogy: sport unions or federations have constitutions, a set of principles according to which championship competition are held. And there must be teams with players that compete based on the specific laws or constitutions that governs sport activities. Without players and teams, the rules cannot be carried out.

A modern constitution is the basis that allows citizens to participate in governing themselves through their elected officials and political parties. If there are no laws that govern the football teams, and how they compete and how the games are conducted, a proper competition is not possible. Similarly, political parties are the foundation that guarantee a working constitution. The single party dictatorship would have been ameliorated the current crisis if Sherifo’s party formation law was left alone.

Countries need constitutions. Without it, there is no rule of law and no fairness or justice. And that cannot be achieved without a citizens’ representation. Incidentally, that was the reason for “the Boston Tea Party”, the American event that led to the American Revolution.

In 1773 Boston witnessed protests by American settlers known as the sons of liberty (deqi Harenet). The protest was against the British East India company that unfairly controlled the economy. The event was sparked when the protesters destroyed a shipment of tea leaves imported from China to the American colonies without paying taxes to the local government. Thus, the slogan they raised: “No Taxation Without Representation.” In addition, they rejected the privileges and competitive advantages enjoyed by the British East India Company (which is like The PFDJ’s Eritrean Red Sea Corporation).

According to some literature, after the Boston Tea Party, English Tea became unpopular and gradually the public taste shifted to Coffee. Today coffee has become a traditional beverage of America.

Does A Constitution Guarantee justice?

Throughout the ages, constitutions have developed slowly until the age of enlightenment, when philosophers like Rousseau, Locke and Hobbes who created awareness about social contracts and the rule of societies. Since then, the modern constitution was adopted by many with an understanding that “a constitutional government should be stable, adaptable, accountable, open, and should represent the people.”

That is my argument against the Isaias’ constitution, and I would like to see elaborated argument debunking mine instead of emotional and sensational defenses that would not add anything to the debate.

So, as I said for decades, only an Eritrean reconciliation conference can draft an all-representative national constitution. Such documents do not become national simply because one calls them national. No popular participation is worthy unless it has weight and plays its proper role. And no sane person should see the action of the ruling clique that’s strangulating and frustrating the Eritrean citizens’ calls for justice and freedom. Worse, not offer the ruling party a means to continue oppressing the nation. I wish people stop their love affair with the half-baked bread, stale bread. So far, the calls for the implementation of the Isaias constitution are unicolor, mostly repeating the PFDJ influenced narration.

I have written and spoken repeatedly, for decades, and explained my views on the core issues all over the world for decades. When it comes to the constitution, I do not think I have more to add; it’s frustrating to repeat the same arguments when people cannot rationally debate against ideas they do not agree with. So far, the responses have been, emotional, mediocre at best and jingoism at worst.

With that, I would like to reiterate that unless I see a serious argument that debates constitutionalism, I will not engage in the partisan promotion of The PFDJ’s Constitution.

Finally, I have an appeal to the few who make unfounded claims: Please stop claiming that many sacrificed their lives and their freedom fighting for The Constitution. That is not factual and it’s not helpful. The only movement close to that, the 2013 Forto coup attempt where the mutineers mentioned the rule of law. I have reasons to believe their demand was specifically focused on constitutionalism, not “Isaias’ Constitution”. To this day, there is no life or freedom lost strictly because there was a strict demand for the implementation of the constitution. Didn’t its owner chock and discard it? Didn’t he declare that publicly on many occasions?

The claimed promise that The Constitution can be amended once the people decide on the amendment, is an empty promise. Even the PFDJ claims it’s doing whatever it does based on the people’s will. Isaias once said he would step down if the people wanted him to! What’s the mechanism to listen to the peoples’ wishes? People who didn’t have representation in the beginning cannot have a say after the fact.

The people have no power. And the PFDJ frustrated every attempt to build such a structure, an institution that would enable the people to have a say and own their fate.

I hold that one cannot fight the oppressor regime using its own arguments that will end up buttressing the regime’s hold on power and keep chocking justice and freedoms. But Eritrea will have a constitution. And justice. And peace, depending on how honestly, Eritreans struggle to stop the divisive partisan campaign for narrow interests at the expense of the citizens’ interests, and focus on public interest. Until I meet you in the second and final party of this topic,
Stay well.