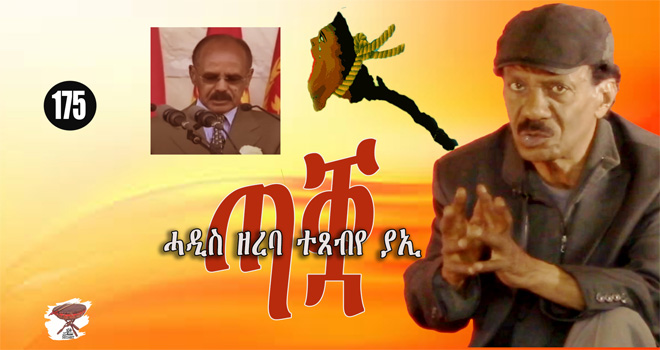 It’s good when a culture encourages entertainment; it is bad when it spreads gloom. Entertainment makes you forget your pain. And Eritreans have more reasons than any other country in the world for partying. That is why they must adopt the goal of “Pursuit of Happiness” which is a fundamental right of Americans that’s engrained in the American Declaration of Independence. In our case, there are reasons for partying though we don’t need reasons to entertain ourselves. If visiting home makes you happy, go for it; board a plane and fly to Eritrea. But be careful, don’t make selectively see the good things only and ignore the eyesores and bad experiences. Also dance as much as you can to protect the interest of the nation. But remember, that is not protecting national interest. And there are chances it’s in support of political interest of the ruling party.

Whether you recognize it or not, you are serving the ruling party’s interest. It is half designed as propaganda to serve political and touristic goals though camouflaged as a national event. And if you miss a celebration, wait for the next one. Don’t worry, there is one coming soon. They come in fast succession. Stay intoxicated and never indulge in any serious contemplation until Martyrs’ Day, soon. Then go through the ritual of lighting candles. And as soon as the sun sets (maybe earlier), run to the nearest booze alley and wet yourself. Problems? What problems, there are none.

Wedie AlSafie, who died in 2013, was a famous Lebanese singer. Decades ago, he was considered old compared to the typical 25–35-year-old singers.

Many years ago I and an acquaintance were watching WediE Al-Safie sing on tv; my acquaintance, a traditionalist, was surprise by the old singing man; “Elli abuka mn geb’e, abuka me’ sheqe mnlbluka, m’tebelom?” (If the singer was your father, and someone asked you what your father did for a living, what would you say?) I was taken by surprise because I never imagined my father as a singer. Neither he was just posing a rhetorical question. I reminded him there were a few Eritrean singers who were the same age as Wedi’E AlSafi! He had an answer: “but they don’t appear on television for all the friend of their children to see!” The usual argument continued until his favorite show appeared.

I remembered that incident watching the professional Eritrean celebrators who never miss an opportunity to wrap themselves in a flag, and with a sly smile, tell everybody watching them how they are more patriotic. I am not sure if most can spell PATTRIOT! I thought, if someone watched them and asked me “Elli eb banderet gelbub lahalla Abuka mn gebi’ mi webelka?” (What would you say if one of the crowds was your father?)

So, enjoy yourselves as much as you can, pursue happiness. But please observe and contemplate if most of the celebrators know what Eritreans inside “independent Eritrea” are going through.

Mind you, social and patriotic obligation is not measured by the yardstick of the ruling party or by its servile loyalists of the rulers. Be happy and celebrate, but don’t forget to have sympathy for those whose relatives are in jail since some of you were born—on January 1, of whatever year—January 1st being easier to remember for those who do not know their birthdays.  Just like you join government sponsored celebrations with zeal, remember to visit relatives of jailed people you know. It’s a social obligation. Don’t just keep counting years and anniversaries like children who count stars until they fall asleep. But if your conscience bothers you, try going to sleep by counting black sheep: one black sheep, two black sheep, three black sheep…. until you go numb and fall asleep.

Hourly wage earners know how painful it is to count hours. The clock moves too slowly to the extent one would think some force s delaying it. But after each painful hour passes, the workers are happy remembering how each hour adds to the earnings thy count in their mind. That’s also true for salaried worker, who are of three kinds:

1) those who cannot leave their work station for a break or cannot stop what they are doing—maybe a supervisor is watching, or their work is measurable, like a bus driver who cannot steal time, and,

2) the not-supervised who can browse the Internet, or chat with their friends on the phone and can get away with it—no one notices they are stealing the employer’s time, and,

3) the special class of workers who are not bothered by the slow clock that doesn’t affect them financially. This group portray themselves as honest, hardworking people. They follow the time old trick of “Look Busy Do Nothing”. They take out all the papers from the drawers and cabinets and spread it on the table. Then they flip through papers, or breath heavily when someone gets closer to show they are overworked and exhausted.

Which of the above examples fits your situation in relation to couniting the anniversary years since 1991? Do you look busy trying to present yourself as a patriot when you don’t care if Eritrea disappeared tomorrow? Do you painfully count the years like an hourly wage worker? Or, you are counting down the time left for the next anniversary and you have plan to drink yourself to death and showoff your flag-themed sack-like clothes? How do you count the years? Please type and share your comment below.

Imagine a girl, your relative, gets married; you are happy, and you celebrate. Soon she has children, and you are very happy. Then the husband begins to abuse her, and she is miserable, always crying. Then one day she invites you to her wedding anniversary. Do you feel like celebrating the wedding or not? Would you say, ‘it’s okay if the husband abuses her in a national holiday? However, I know of a few who will celebrate the wedding without too much noise and still strive to stop the abusive husband. Who exemplifies your attitude.

I am certain that reminds you that Eritrea where everyone is happy because their country is liberated, but sad and frustrated it is being abused by its self-appointed rulers. That sums up my mixed feeling. But if you can switch off one of the two realities, go ahead…only, please, as impossible as it is, learn to balance the two.

Many are burning with nostalgia and yearning to see a truly free Eritrea as they face ostracization, abuse, insults, and mistreatment by their compatriots who should know better.

Unfortunately, some Eritreans think celebrating is a legal edict and they consider themselves the thought-police who enforcers that imaginary law. If you say you do not celebrate, or fail to fake happiness, they immediately setup an illusionary court and pass harsh sentence on you, mostly gossip and defamatory rumors. Luckily, the rest of the world is not under the jurisdiction of the PFDJ. But for those who are happy and want to celebrate, they must do it freely provided they remember the ruling party is not Eritrea, it’s the bad part of it. Together with those who support the ruling party and those who abhor it. It’s mindboggling to see some people who do not recognize the right of others to express their views about the PFDJ or oppose it, freely? It’s an unexplainable phenomenon among a society that paid heavy sacrifices for its freedom! The Eritrean political phenomena have become division prone.

It’s the 31st year since the liberation of the Eritrean land, and 31 anniversaries since Eritreans have started to count years since their freedom was stolen. We are good at counting endlessly without thinking about the impact of what we are counting on our lives and that of the country we claim to love.

Finally, if you miss your country, and have no fears of being harassed or jailed, go ahead, visit Eritrea. After all, It’s your country. But while you are there, try to remind the knuckle-headed ruling party officials that they do not own Eritrea; they have only expropriated it, and are continuously pushing its people out.