A Tale of Two Bulls! 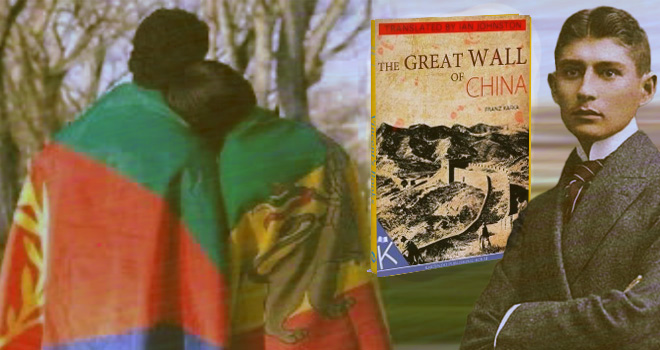 [Reading time: 5 minutes.]
Memory is a bewildering human faculty. Just look at a dream you have of a long-forgotten event from childhood appearing to you, now, as vivid and fresh as the day you lived and observed it when it happened, and in a way that you may not have been able to describe before the day of the dream.

Where was all that hidden? I reckon it was stored and locked somewhere in the back of your mind, away and off-limits to your conscious life, until one day, years ahead, a tiny material or emotional stimulant knocks off all its restraints and inhibitions, causing the magical presence of your forgotten friend to burst into your living memory. This, by itself, is amazing, but it could have been way baffling, had it happened that those tiny materials and emotional factors chose to work on you while you are awake with eyes wide open! That is what happened to me when I, the other day, was watching a video chunk of a confusing brouhaha of combined Ethiopians and PFDJ mob in support of the Ethiopian war on Tigray. There was at the seeming center of the jumble, a supposed Eritrean with a supposed Eritrean flag covering the entire of his head, back and behind, moving heavily, drowning in loud vulgar music and songs, surrounded and followed by a rabble of his likes.

The video hit my mind and conscience with a force of a lightning rod, breaking a floodgate of what seemed to me long-forgotten memories. I felt mesmerized, detached from the video, and connected to myself by a scenery embodied in front of my mind’s eye, a turbulent theatrical manifestation full of majesty, music, and dust. A manifestation I could not be sure of its historical reality though it seemed to me so real as to be dismissed. I couldn’t, and can’t now, recognize and discern if this scenery happened, as described hereunder, or if it was my imagination playing tricks on me. I have no objective reference supporting my assertion of its reality. I had to consult friends and peers and inquire if they ever have experienced something similar to what I think has happened in the remote past; it was all in vain and of no help. Yet, it is tough for me to abandon my claim because I believe strongly in what I once read: “Memory is a relative to truth if not its twin”.

So here is what I believe has happened though forgotten for long as to be thought dead, now resurrected by a human bull in a silly show:

I believe that during Eritrea’s Ethiopian era, there was a folkloric practice in Asmara whereby an ox for slaughter in a wedding festivity was paraded in the streets of the neighborhood, his back fully covered in the tricolor Imperial flag, boys, men, and children following the procession amidst great joy and fanfare: lyrics, songs, and music in the air. The poor animal, mooing between the wails of the Meleket (መለኸት) and shrieks of the Embelta (እምብልታ), now digging

heels resisting to make headway, halting the procession to a standstill, no matter how loud and sharp the cracks of the cane stinging and inflaming its back and behind by a giant barefooted man in white-strait-garb and a tricolor bandana tied around his head, shouting, and moving erratically giving-away his disappointment in the failure of the order of things dictating the ox, to smoothly, and submissively, proceed to his death. The next minute, the beast’s eyes seemed frozen, nostrils bloated and wide-open as if whiffing flames, now he starts moving sluggishly, then hurriedly, and at last as if in a race of jogging to overtake his tormentor, rushes boldly to the finale where the butcher and his long knife are eagerly waiting.

But it is not only this that the video show with its human ox at the center has kindled in my memory, it also awakened in me a paragraph by a great writer, Franz Kafa, in his breathtaking short story “The Great Wall of China” in which the narrator describes the people’s unawareness of what was happening to them:

“The people will never know anything about these struggles and suffering. Like those who have come too late, like strangers to the city, they stand at the end of the thickly populated side alleyways, quietly living off the provisions they have brought with them, while far off in the marketplace right in the middle foreground the execution of their master is taking place.”

Kafka never said who the ruler is, but I choose to think of the ruler as “The rule of law“!