Bologna Conference: The Benefits of Non-Violent Struggle in Eritrea

Posted on September 8, 2013 by A/Rahman Sayed (Bohashem) in Articles 43 Comments 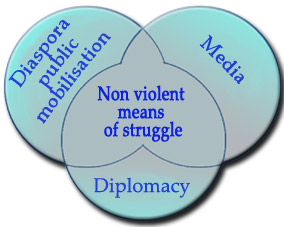 I was recently invited to speak at a conference organised by EYSC (Eritrean Youth Solidarity for Change) in the historic Italian town of Bologna held from 30th August to 1st September 2013. My presentation focussed on the merits of non-violent struggle against the tyrants ruling Eritrea from 1991 to present day.

EYSC is a diaspora based youth movement with a potential for effective contribution to the ongoing non-violent struggle inside and outside Eritrea. The youth group employs many technical skills in pursuit of change in the homeland, including facebook with a following of about 12,000 engaged in  lively debates on issues of Eritrean concerns.

The theme of the Bologna conference was: Eritrean Solutions for Eritrean Problems. There were eleven scheduled speakers who presented inspiring messages. I was particularly touched by Dr. Rebka Sebhatu’s presentation, which focused on the traditions of Eritrean oral history including the tradition of storytelling. She eloquently related the stories with our cultural values and identities that the ruling regime in Asmara has been trying to destroy.

The EYSC organisers clearly showed high organisational skills in pulling together a conference that was attended by Eritreans from around the world, including participants from as far as Melbourne, Australia and California, USA.

In my presentation, I explained that the method of struggle pursued by a people to achieve democratic change most likely determine the form of change they achieve. Experience has shown that, in general, using violent means to change a dictatorial regime into a democratic system of governance results in counter violence by the opponents. In essence, the message of democracy, justice and peace will be replaced by revenge, hate and unrest.  Violence breeds violence, destroys lives and properties, silences dialogue and rationale, and eventually replaces one dictator by another or even leads to breakup of a nation into mini states ruled by several war lords who would act as local dictators.

As the ruling tyrants in Eritrea eventually grow weaker and lose support from within their rank and file, the best option is to reach out to these forces of change within the ruling party, including the army, the intelligence services, the police, civil servants and PFDJ (“ruling party” in Eritrea) members to play a decisive role in removing the tyrant and initiating the process of democratization. The best strategy is always to seek change to come from inside Eritrea and has to be fully operated by Eritreans from beginning to end. External support is greatly appreciated but should not compromise Eritrean sovereignty, unity, and strategic interests.

Non-violent resistance is a strategy that is more engaging and allows the people to participate in their cause and determine its outcome to be consistent with their dreams and hopes for change. Non-violent resistance requires a great deal of courage, sacrifice and dedication to a cause. Its principles are rooted on political defiance based on the power of the masses thereby requiring tremendous amount of patience and endurance of pain.  In the Eritrean case, state institutions currently serving the ruling tyrants can be called upon to side with the people, to defend the people, and to help the people remove the tyrant and his cronies from power, and to help stabilize  the country during the transition period to democracy and beyond. Targeted violence practiced by the current state institutions against the tyrant may therefore be justifiable provided it is limited in scope and purpose to achieve the end result called for by the masses. What is not justified and dangerous is for opposition groups based outside Eritrea to have violence as a strategic means of struggle, and hence have their own partisan “armed cadres/wings/militia/liberation army” to remove the tyrannical regime and to promote their own partisan politics and programs. In fact having different groups with their own armies is a recipe for failure and chaos.

It can be argued that the Eritrean opposition taken individually or combined does not have the necessary political public support or the means and capacity to wage a successful armed struggle against the current regime for various reasons. Nevertheless, one can observe the early symptoms of individualism and intolerance in their political rhetoric and outright condemnation and criminalization of independent Eritrean opposition activists who promote non-violent struggle. This suggests, if the culture of intolerance is maintained, the opposition camp may impose dictatorial rules by violent means in the future. It is for this reason that the pro-democracy non-violent movement should not shy away from peacefully challenging all adversaries including some leaders in the opposition camp. After all democratic change is not just about removing one party or leader and replacing them by another, but about spreading the culture of democracy both vertically and horizontally.

Non-violent struggle is deep rooted in the Eritrean contemporary political history. In 1940s the Muslim-League led Independence Bloc (an umbrella for pro-independence Eritrean parties) was a non-violent movement. The Bloc succeeded in rallying Eritreans from all walks of life for the cause of independence and in sowing the seeds for liberation from foreign colonialism. In 1958, when the Ethiopian monarch began consolidating its violation of the UN-imposed federal union between Eritrea and Ethiopia (1952-1962), and decided to lower the Eritrean legitimate flag (blue ground with green olive branch emblem, which, ironically, is still detested by the current tyrants), Eritreans resolved to fight back through a non-violent trade union and political movement. It was at this time that the Eritrean Liberation Movement (ELM – commonly known as cell of 7 ማሕበርሸውዓተin Southern Highlands and as حركة movement in the lowlands) was launched as a non-violent pro-independence democratic patriotic movement. In post 1991, soon after Eritrea’s full liberation from Ethiopian occupation, the ELF-RC, and later G13, G15, EPDP and other parties and groups have consciously took the decision to pursue non-violent strategies to challenge and expose the Eritrean regime. In addition to its numerous benefits, the non-violent strategy is therefore well rooted in the Eritrean struggle for justice and independent democratic state.

The following can be listed as summarized advantages of non-violent means of struggle:-

•          It gives space for people to own the struggle as well as the outcome of the struggle, whereas in violence scenarios ownership of the means of struggle as well as the outcome often falls in the hands of the conflicting parties. Somalia, CDR (former Zaire) and Libya can be cited as examples of how violence between conflicting parties may lead to state failures

•         It draws local and international public sympathy when the conflict is between tyrants and unarmed civilians, instead of tyrants and armed opposition groups

1. Diaspora public mobilisation can effectively help deprive the pfdj tyrannical regime of the 2% income tax and other financial resources that they generate from Eritreans. Public awareness raising events such as holding rallies and demonstrations, seminars and conferences such as the Bologna conference to discuss and promote ideas and solutions for our country’s problems contribute a great deal to the democratisation efforts. In recent years Eritrean activists have been using creative non-violent means to reach out to our people inside Eritrea through telephone calling campaign known as “Freedom Friday” ( ዓርቢሓርነትجمعة الحرية) where random calls are made to thousands in Eritrea encouraging them to express their rejection of tyranny by staying at home on Friday evenings.

2. Media – the role of media is crucial in informing the public and raising awareness as well as exposing and challenging tyrants. Media tools include Radio, TV, CDs, DVDs, Internet, Arts (including drama, poem, music, paintings etc.). Dictators in general and the Eritrean tyrant in particular fear independent media more than any other opposition movement, e.g. PFDJ media avoidance of Arab-Spring news, banning of Aljazeera TV broadcasting in public places after the Forto 21 January 2013 movement can be mentioned as some examples of the regime’s paranoia and fear of truth . Also the effective role played by cyber media outlets such as awate.com can not be underestimated in breaking the fear barrier as well as in promoting open political discussions among Eritreans.

The focus should therefore be on building media institutions that can effectively contribute to the struggle for change towards democratisation.

3. Diplomacy:This tool can be used based on two approaches:-

b. People’s Diplomacy (e.g. lobbying local parliamentarians, including use of voting and other civic rights) to promote our people’s cause.

Any Potential Role for PFDJ Members?

It is difficult to describe the PFDJ as a political party. That is because it does not function like one. Since its creation in 1994, the “party” held no congress or central committee/leadership meetings. Its tyrant leader is the only authority with unlimited power to dismiss, imprison and eliminate any party member, including those who are members of the leadership. e.g. G15, Abdallah Jaber, Mostafa Nour-Hussein etc. The party’s situation and absence of basic party functions was eloquently confirmed by Dr. Assefaw Tekheste, ex-EPLF and PFDJ member, during the Bologna conference.

All indicators in the last few years show that there is a growing pro-democracy movement inside Eritrea and within the PFDJ camp. The existence and role of pro-democracy movements inside Eritrea can be seen in the fast increasing loss of public support for the tyrannical regime. This movement may not be adequately visible with organisational and leadership structures, but their work can be seen in the dwindling numbers of those participating in pfdj festivals in the Diaspora, challenging questions they raise during meetings with pfdj leaders, and the continuous imprisonments of hundreds of pfdj members inside Eritrea.

Unlike violent movements where the resolve would be to wipe out one another, the non-violent movement’s strategy is inherently to “convert” and win over the “enemy”. This means, PFDJ members, institutions and supporters are potential pro-democracy forces that we should work hard to win over and deprive the tyrant of their support. This guarantees victory and also helps the transition towards democratisation process.

EYSC deserve special thanks for pulling together a conference that was “fruitful, flexible and fun” as they planned.

It is good that such conferences will be held annually. I reiterate the suggestion I made during the final moments of the conference that future events should not be exclusive to all opposition groups and individuals only, but should also be open to PFDJ members and supporters, if willing to participate in. Engagement and communication is half way towards building mutual understanding and cooperation for common good. The annual Bologna Forum may further be used to raise awareness of challenges facing our country such as the economy of a mal-administered and war-torn country, youth unemployment, transitional justice, foreign policy etc.

It is crucial for members of the non-violent pro-democracy movement to come together under one umbrella platform to coordinate their efforts and strengthen their networks based on common guiding principles.

The non-violent movement should seek to constructively engage those who opted for armed struggle or who entertain and promote such views. They are not enemies, and their views may be based on anger and frustration, rather than on well studied strategies.

I hope we are all able to use the next Bologna Forum event to report on tangible progress made between now and then.

May Peace & Justice Prevail in Eritrea!