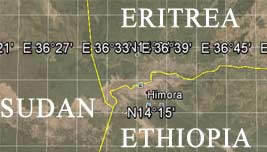 In the last few months, the Eritrean army has dismantled most of its search points around the borders of Ethiopia and Sudan. As a result, the shoot-to-kill order has become less lethal.

The relaxation of the border has affected the flow of refugees to Ethiopia, which now is receiving entire families and underage children. Until recently, only the young and the physically able persons could take the risk of sneaking thorough the heavily guarded dangerous border.

Eritrean forces are thinly distributed across the border areas since many of the conscripts have escaped leaving the army with hollow units. On top of that, it has been reported that some of the soldiers are cooperating and helping the escapees make it to Ethiopia. At least in two instances, two escapees stated they were stopped by a scout of the Eritrean army and then shown the safest and shortest way to reach the Ethiopian refugee camps.

Ethiopia houses tens of thousands of refugees in several camps; however, in spite of the big numbers of new arrivals, the camps are being emptied relatively quickly.

Recently, an unknown party has started to smuggle the Eritrean refugees across the border from Ethiopia to Sudan. Until two months ago, escapees who wanted to make it to Europe or North America and Australia were ferried by buses for a fee of 400 Ethiopian Birr and dropped near the tri-point where the borders of Eritrea, Ethiopia and Sudan meet: Humera (Ethiopia), Hamdait (Sudan) and Om Hajjer (Eritrea).

Many of those dropped at the border have fallen into the hands of human traffickers.

A few weeks ago, a busload of escapes were intercepted by Eritrean security forces and taken to Eritrea. But some news indicate the victims ended up in the hands of human traffickers who kidnapped them after they entered Sudanese territories.

Since then, a few escapees have traveled to Sudan in an airplane for a fee of 8000 Ethiopian Birr.

Based on the history of the region, observers suspect the travel operations are organized by human traffickers who have access to official facilities.

In the past, Ethiopian security forces have apprehended several collaborators of human traffickers from among the refugees.

As of the recent weeks, Human traffickers are transporting a new, and bigger wave of Eritrean escapees to Libya and Egypt from where they will head to Europe.

It is expected that many escapees will overwhelm the Italian coasts in the near future.