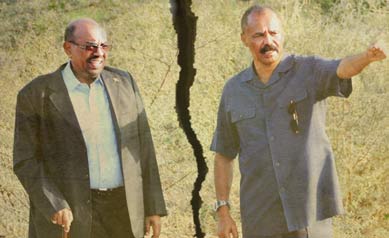 On Tuesday, June 2, 2015, President Omar Hassen AlBashir was sworn in for a five-year term. In April, AlBashir won in an election that most opposition parties boycotted. AlBashir has been ruling Sudan since he came to power in a military coup in 1989.

Almost all leaders of Sudan’s neighbors attended the ceremony when AlBashir swore in on Tuesday. Leaders who could not attend in person, sent senior level delegates to represent them. However, AlBashir’s close friend and neighbor Isaias Afwerki of Eritrea didn’t attend, and did not send a representative.

Over the last few years, the close relations between AlBashir and Isaias has gone from warm, to lukewarm. It started to suffer when Sudan assumed a more pro-Ethiopian role in the diplomatic wrangling over the Nile between Ethiopia and Egypt regarding the Grand Ethiopian Renaissance Dam.

The crisis between Egypt and Ethiopia was resolved when President Abdulfatah AlSisi came to power after it has been escalating to serious levels, when Egypt was under President Mohammed Mursi, who as deposed by Al Sisi in 2013.

Mursi’s government was cajoling Isaias to side with Egypt in its efforts to pressure Ethiopia. However, Sudan boldly sided with Ethiopia and frustrated Mursi’s efforts in the region. Isaias felt betrayed by AlBashir and his attempt to ride the Nile crisis was further hindered when Mursi was deposed. His successor, Al Sisi, reached an agreement with Ethiopia.

AlBashir has also facilitated Isaias’ relation with Iran when he  met the previous Iranian President Mahmoud Ahmadinejad. Isaias didn’t benefit much from his relationship with Iran. On the contrary, in a time when the Houthi rebellion was building up in Yemen, Isaias’ relation with Iran made him a primary suspect in the region and he was accused of providing a supply bridge between Iran and the Houthi rebellion. However, so far no evidence has emerged to confirm Eritrea’s role in arming the Houthis though the Arab Gulf media always repeats the accusation.

Sudan is a member of the Saudi led coalition against the Houthi rebellion in Yemen and has provided a nominal number of fighter planes.

After twenty years of close relation, last year AlBashir ordered the Iranian Cultural Center in Sudan to shut its doors and finally broke off with Iran by joining the Saudi led coalition. Isaias was left in the cold, and he considered that the second betrayal.

Recently AlBashir tipped the Saudis on the risk that the unpredictable Isaias poses in Yemen and advised them to neutralize him. In a trip arranged by AlBashir, last April Isaias travelled to Saudi Arabia, but unlike his expectations to make a beneficial deal, the Saudis simply asked him to stay clear of Yemen. Isaias felt he has been betrayed by AlBashir for the third time.

Isaias’ frustration was evident in his Independence Day speech in which he said, “there are self-styled or aspiring regional powers which misconstrue the vacuum and imbalances entailed by the war of chaos as a blessing in disguise and which aggravate the prevailing turmoil in order to promote their influences in the region.” Many observers believe that is in reference to Saudi Arabia.

Such statements are usually reserved for Ethiopia and the USA, but according to a diplomat, “if he meant Ethiopia, he would have mentioned it by name like always.”

AlBashir is attempting to rehabilitate himself by taking initiatives to mend fences with the West and is offering general amnesty to his opponents. In addition, he has made promises to reform his government. Isaias has also been taking similar steps towards the West to get out of his isolation. But neither Isaias nor AlBashir is expected to succeed. However, unlike Isaias, AlBashir’s rolodex is much bigger and he might succeed in breaking his isolation.

It is unusual for Isaias who lives about one-hour flight away not to attend in an occasion when his friend AlBashir is sworn in, but “three serious betrayals” cannot be taken lightly by Isaias. It’s unpredictable whether the relations between the two almost-three-decade-presidents will be further strained or it will only be a temporary boycott. It will be clear on June 30 when AlBashir’s party celebrates the day it came to  power through a military coup in 1989. If Isaias attends that celebration, it would mean their cold relation was temporary, if he didn’t, then it has deteriorated so much other developments can be expected.