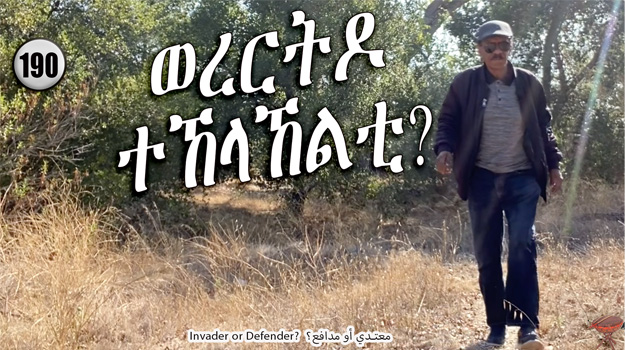 Today I will formally introduce the background intro music of Negarit, that you hear in the intro and outro. It is the work of my youngest brother Ahmed Abdulrahim. On behalf of myself and the audience of Negarit, I express my appreciation and gratitude to Ahmed for the gift. Thank you.

I always avoid mentioning names of media outlets in my programs not to cheapen the discourse, but this morning I listened to a YouTube comment that I felt compelled to reply to. A viewpoint read by AAN seemed to be telling listeners not to blink their eyes while he sprayed pepper-spray on them! However, I do not want to react in haste, I might come back to it in another episode. Let me continue with my regular topics:

Many people ask, a few even criticize awate.com’s Gedab News for slowing down in reporting since the current war in Ethiopia started. I understand their frustration, it’s their lack of an objective value-added news at a time the region is tearing itself apart. I will try to explain the reason so that you do not wonder anymore. An Arabic saying goes, “Idza Urefa al-sebeb betela al-Ajeb”( إذا عُرف السبب بطَل العجب)

So-called news outlets have been mushrooming since the war began. Individuals and their uncles are reporting on the war. For the most part it is cut-and-paste or listen-and-repeat without due diligence or added value. The scene is so much confused by the propaganda saturation. There are no neutral reporters in the region, and it is left to the warring parties to spread their own narrations. The main source of news are the antagonists, three sides of them. And all the partisans of the Breaking News outlets source their news, either from the Federal Government, the TPLF, or the EPLF. In short, it looks like the War in Iraq, when CNN started its “Breaking News” business and Peter Arnett reported live from Baghdad. But no one is reporting from the battlefields of Ethiopia.

The worst part of the reporting is its dull nature, recycled news with no value added each recycling stage. If you sample three randomly selected outlets, each representing the three warring parties, you get the drift. However, though the process is the same, the content is drastically different—it a requires a news consumer turned news analyst to be informed.

Gedab never did that before and it will not do it now to the save the region form more confusion. It’s waiting for the region to gain its relative sanity and then it will return forcefully.

When (and if) the war stops, most of those whose only stable is third and fourth-hand war news will have nothing to report. Meaning, when the guns stop and the belligerent parties sign a peace agreement, like they always do after each session of madness, Gedab will be there to serve. Until then let’s consume the mostly laughable and mediocre reporting.

If you think that is an exaggeration, explain to me how a news reporter starts by ululation, announcing a “Happy News about our forces that decimated the enemy…”! Will you believe any of what follows? Would you consider that an objective reporting? Maybe one can get some important information, like seeing POWs interviewed. Whether you consider it propaganda or not, it gives you an insight. For instance, the clips of Eritrean POWs are important elements that provides leads though the audience must critically dig deeper to find out the truth. Neutral reporting (not stakeholders’) is the most important source of information in a war; and that is absent in the Ethiopian war.

In some battles, there were more gliding eagles than the number of the corpses. In the Ethiopian war, the eagles are feasting, zeroing in on a body and diving to tear it apart more than the bombs and bullets did, and enjoying a good meal. When it is dark, it is the turn of the hyenas that fight over the bodies of one of my relative, yours or another. It’s the remains of someone’s child, a brother, a sister, or a friend. Only bloodsuckers agitate for more of that under the guise of patriotism!

The dead are not aliens, but members of societies that will grieve over them for years to come. Sadly, many consider then mere numbers, unknowns, inconsequential disposables. What would those who agitate for more of that feel if a body was that of their own son, sister father, friend, or relative?

“god talked to me”

If god personally told you to gamble with the lives of thousands, you would!

I heard somewhere Abiy Ahmed told his pastor he is seeking peace and had asked a mediator to convince the Americans to intervene in ending the war.  The pastor told Abiy “go had told me victory is yours and you will crush your enemies and rule for decades more, don’t give up.” The next day Aby started a second round of the current war. That is not surprising because most of the region’s so-called religious leaders are behaving like agitator instead of preaching peace.

Don’t be surprised, but last night one of Abiy’s gods talked to me also. He told me the current war will end the same way the Badme war ended. The leaders will sit around a squeaky table, smile, shake hands, hold a pen, and sign a piece of paper. They will order their generals to stop the ware. Let me tell you a story…

A long time ago I had a childhood friend who moved to Kassala for schooling and basically grew up there. In one summer-break, he came to Keren and stayed for three months. One day he wanted to buy a pen—Bic cost 15 cents then. I took him to Farmacia Bruno, across the street from my father’s store. Bruno had opened a stationary store on the side of the pharmacy—a nice guy named Berhane was running it. On the counter, Parker and Shaeffer fountain pens were displayed—three or four dollars each. My friend liked the Parker. I told him it’s beyond his budget, 3.5 dollars and he should buy a Bic instead. Surprised by the price of the Parker he exclaimed, tektib beraaha?” (Why that expensive? Does it write on its own!) It would have been good if pens would write on their own.

When the reckless leaders finally sign the agreement to end the war of madness, there will be no pen that signs the agreement on its own, they will have do it themselves, just like they decided to ignite the war on their own. Warning…….

What I said doesn’t mean there is no just wars. I know there are wars that must be fought, a war to resist aggression is a noble war and must be fought. For that matter, any injustice must be fought. And I cannot explain that better than a Koran Aya: “qatelu allazina akhrejekum mn ardikum….”

Think about it: who is being pushed out of his country in this war? Anyone who is not aggressed upon and who is not pushed out of his country has fewer reasons to wage a war. If he did, it will be an unjust war. In the current war, it’s clear who is fighting a just war? It’s crystal clear. Now that I have quoted the Koran, I must quote its bible version because people insist both holy books must be quoted equally. It’s the Eritrean obsession with unity. For now, forget the quote that asks you to offer your other cheek if they slap you on one. I don’t think anyone followed that throughout the history of mankind, and no one is doing now. Instead, I will quote something else I first heard in a beautiful song that I had no idea is related to the bible “a time to love and a time to hate, a time for war and a time for peace.” Mekbeb, 3:8 (Ecclesiastes)

I appeal to all not to preach for any war that they do not risk their lives in.