Help Keep The Lights On! 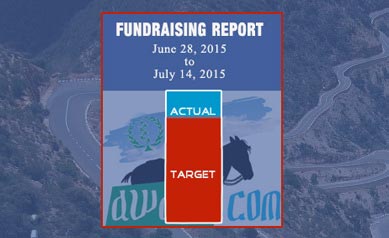 On June 28, 2015, we issued a public appeal to support awate.com under the title, “Help Keep The Lights On!” which is appended below. Today we reporting on the activities of the 17 days, since the appeal was published.

As of July 14, 2015, only ten people responded to our appeal (excluding the pre-existing commitment by TR), their abbreviated names are as follows:

The following is the original content published on June 28, 2015

In March 2014 we solicited your support for contributions, hoping to raise $12,000. By the end of the year the donated amount was nowhere close to that–only $3,700 was donated (less 3.95% Paypal fees)

In a reminder that was published on December 2014, the appeal stated that “It would be nice to have a deep-pocketed sponsor to fund your activities. If we had one, we wouldn’t solicit your help publicly.”

Earlier this year, as we launched Awate2020 project, we decided to study the funding problems and check the public perception of awate.com and its performance. On March 5, 2015, we published a Murvey-com survey that 300 people answered. The full result of the survey is linked here, but in this message we will share with you the relevant findings concerning the funding difficulties.

Question #3 of the survey was designed to check the public perception regarding donation to awate.com, and how much respondents thought we collected between March 2014 and February 2015. While 3% thought the donation totalled over $100 thousand, 26% of the respondents thought over $50 thousand was collected. Fortunately enough, 71% thought the total was under $3 thousand.

But you don’t have to guess anymore!

In the last eighteen months, the visitors who register about 350,000 pageviews monthly on awate.com, donated $5,360–an average of $298 a month (less 3.95% Paypal fees). We hope no one thinks awate.com can run on that amount let alone the activities we keep on pending because of lack of funds.

The Murvey survey showed us something many of you are already aware of: since the inception of awate.com, the PFDJ and its affiliates have been waging a relentless campaign to discredit it and to defame its administrators. However, the public is much smarter, and more patriotic, than the PFDJ is willing to admit.

Does the public think that awate.com is funded by, “Weyane, CIA and other intelligence agencies”?

A marginal 3% think so, while 18% of the respondents do not know if that is true or not! However, 79% do not believe the PFDJ propaganda.

A similar question asked the surveyed if they think NGOs and other entities ever funded awate.com since its inception. Again, a marginal 4% believe they have, while 56% responded, “I don’t know.” However, 40% believe awate.com was never funded by an outside sources. And here we can tell you, as we always did, awate.com has never received a dime from outside sources.

Interestingly, question #7 explains our funding problem: During the last 15 years, 60% of the respondents said they have “not contributed a dime to awate.com.” Another 33% said they have contributed at least once. The rest, 7%, said they didn’t know they have to! If you are one of the 60% or the 33%, we ask you to be more generous. We are not sure what to tell the 7%!

We regret having to inform you that, save the few dedicated volunteers who have always been supportive, we have been bearing the financial and the personal brunt to be able to continue offering our services; we are bleeding. We assure you that we will never appeal to narrow sentiments of people for the sake of funding; that is simply against our principles. This website promotes liberal democratic values which we believe the overwhelming majority of our readers subscribe to. And we do not want you to donate if you do not believe you have to advance the ideals that this website stands for.

Question #18 of the survey was very empowering; 86% of the respondents said they will be saddened if awate.com closed shop, while 11% said they do not care, and 3% (we know who they are) said they will be excited and pleased. We are appealing to the 86% who want awate.com to stay open, and above water.

Lastly, question 19 reflects the attachment that readers have with awate.com: 71% didn’t like the idea of limiting access to subscribers only, while 13% said they didn’t care, and 16% supported the subscription idea. However, we will never limit access to awate.com to those who pay a subscription. Therefore, we appeal to all of you to help us keep it stay as it always was, your open website.

Since the beginning of the year, we have been busy with the “Awate 2020″ project to institutionalize our activities. We have established “Awate Center” which will be involved in strategic studies, research and publications; awate.com, Negarit Media, and other resources will be under the wings of Awate Center. Some tasks are already finalized while others will be accomplished soon. In addition, there are a few initiatives that will be shared with you in the coming few months. Please note: we cannot achieve much on our own, we need your support.

It’s understandable that people are being asked to donate to so many causes by so many entities; only a few are funded by deep pockets and committed support groups. Awate.com will never change or alter its policies and principles to appease interest groups and individuals for the sake of funds. We are committed to our values  and hope our record demonstrates that favorably.

The high traffic that awate.com generates is a testimony that it has the approval of the public and enjoys a favorable rating. And volume matters. Conversely, it is difficult for an individual to donate $1,000, but it is doable if twenty people chip in $50 each.

Our weakness on fundraising is obvious, but we would rather focus on delivering reliable, high quality content to serve our main goal:  Inform. Inspire. Embolden. Reconcile. Please spread the word and encourage others to contribute. Help us campaign to raise funds through your social media accounts–and of course, through discussion forums, e-mails, telephone, and the like.

In conclusion, though we are not at liberty to disclose their names, we would like to recognize a few loyal friends and supporters: since last year, a lone member of the awate forum has authorized a monthly direct deposit of $20 to our Paypal account–the only one who has been donating regularly! Two generous people contributed $500 each, one is a forum member though the rest of the 34 contributors could also be regular forum members. We thank all the loyal friends of awate.com who have always been there to help. Please share the burden by chipping in whatever your budget allows.

As you have always counted on us; we are counting on you.

Thank you very much.