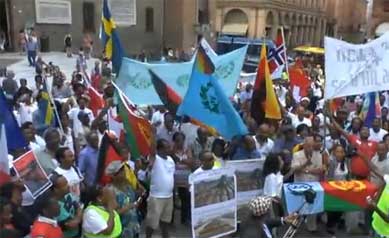 For the last three days, the Italian city of Bologna has been a battleground for a showdown between the supporters of the Eritrean regime and its resistance forces.

At the same time, hundreds of resistance members flocked to Bologna to show their defiance of the Eritrean government.

Several attempts were made by Eritreans opposed to the regime to dissuade Bologna city authorities from allowing the PFDJ festival to take place. The authorities didn’t heed to the appeals.

According to an organizer of the protest demonstration, “allowing activities of the ruling party that is accused of gross human rights violations by international agencies is an affront to justice and democracy. The city is showing its condoning of dictators.”

A member of the ruling party in the Netherlands told Gedab News, “I am European, I can support anyone I want.” Asked if he would support a regime that violates the human rights in his ancestral country he said, “all my family is in the Netherlands.”

Towards the end of the festival, two clashes were reported when Eritrean security guards employed by the Bologna Festival injured two protesters.

The Eritrean People’s Liberation Front (EPLF) initiated the Bologna Festival in 1974 and it attracted hundreds of Eritreans who saw it as a means to demonstrate support for the Eritrean struggle against Ethiopian occupation.

It is unclear why the 40th anniversary of the Bologna Festival is being celebrated with such fanfare as the 25th and 30th anniversaries were largely non-events.

The event, which was live-cast in Eritrea, appears to cater to people’s nostalgia: most of the artists who were flown in, now in their 50s, gained fame in the 1980s.

Ironically, the official who had a lot to do with the original Bologna Festival, Sebhat Ephrem, the Defense Minister, was not among those attending.  He appears to be on the “frozen” list of the Eritrean regime.