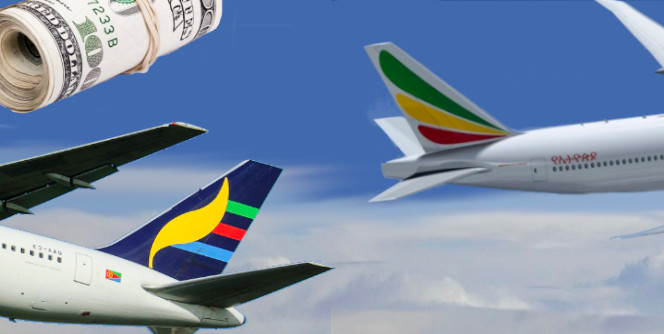 Gedab News learned of a recurring issue between Ethiopian and Eritrean civil aviation departments over the payments of balances. According to our source, “Eritrea’s bills are now past due since it has not paid for Ticket sales it owes to the Ethiopian Airlines.”

On July 18, 2018, Ethiopian airlines restarted its flights to Eritrea after an interruption of over 20 years. Currently, the airlines operates several daily flights between Asmara and Addis Ababa.

In the last 25 years, Eritrea has started many airline companies that soon failed and stopped operating. The Eritrean civil aviation has always had similar payment issues with almost all the airlines that operated into Eritrea, including Egyptair, Lufthansa, Yemenia, Saudi Airlines, Qatar Airlines, and others. They all operated for a brief period and discontinued flying to Eritrea.

Last summer, Eritrean Airlines, which started flying to Addis Ababa using a leased aircraft, discontinued its flights to Addis Ababa over similar payment of balance problems. All previous attempts by the ruling party of Eritrea to establish an airline has failed. Also, several private enterprises also failed due to interferences by the government.

Eritrea is short on hard currency and faces difficulties in meeting its financial obligation to many of its financiers and trading partners.

Last month, after the visit of the manager of Ethiopian Airline’s to Asmara, the airlines stopped selling tickets in Nakfa, the Eritrean currency, which now no airline accepts for purchasing tickets.

In order to resolve its hard currency crunch, Eritrea is pursuing its desire to tie the Ethiopian and Eritrean currencies and peg it to the US dollar. At the moment, the Ethiopian Birr is trading at about 30 to 1US$ dollar while the Eritrea Nakfa trades at 18 to 1US$.

Eritrea continued using the Ethiopian Birr after its independence in 1991, but in November 1997 it issued its own currency, the Nakfa. However, differences in reimbursement of balance of payments ,and reconciliation of financial issues, were building below the surface. The launch of the Eritrean Nakfa is believed to be one of the main reasons that led to the violent 1998-2000 border war. Immediately after Eritrea introduced the Nakfa, Ethiopia decided that the traditional cash trading  should be conducted through “letter of Credit”. Eritrea had strongly objected to that and tension continued until the war was triggered.

In 2018*, after Isaias Afwerki and Abiy Ahmed signed an agreement, they decided to open the border between the two countries and resume trading relations. However, so far trade and immigration through the border between the two countries is haphazardly conducted; the  border is unpredictably open or closed from Eritrea’s side. Often time, the government doesn’t provide clarifications.