Posted on November 18, 2018 by Yohannes Zerai in Reflections 68 Comments 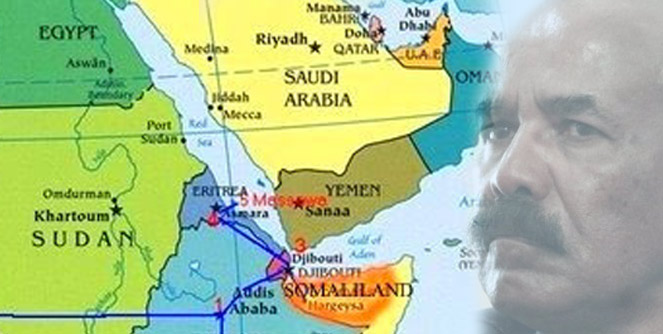 The last six months have seen a flurry of diplomatic activities involving most of the Horn-of-Africa countries and some member states of the Gulf Cooperation Council (GCC). These activities which have included a series of mediation efforts, state visits, summit meetings, and bilateral agreements seem to herald a new phase of regional geopolitics in which alliances are being redefined and new partnerships are being forged in the political, economic and security spheres. What these geopolitical shifts will mean to the long-term interests of the participating countries themselves and to the future of the region as a whole remain to be seen.

In Eritrea’s case, the implications of even the early stages of the new regional dynamics have become not only of grave concern but outrightly disturbing to the majority of its citizens. Despite the much-touted Eritrea-Ethiopia rapprochement and the dawn of an ‘era of peace and progress’ in the region, the Eritrean people have yet to see the slightest sign that the repression, destitution, servitude, and militarization they have suffered under for so long will end anytime soon. Never mind the life-transforming dividends one would reasonably expect to accrue to the population from the cessation of hostilities and from the much-hailed peace and cooperation agreements that followed!

To the contrary, the thousands of dissidents and prisoners of conscience that the regime threw in jail years ago still languish in its dungeons. If anything, more people are meeting the same fate for expressing concerns about the appalling conditions of their people and the disastrous path their country is taking. Drastic changes in the demographics of migration to Ethiopia have been observed since relations were restored with that country. Presently, four times as many Eritreans flee to Ethiopia daily as did before the border between the two countries had reopened. The exodus, which in the past consisted predominantly of youth, is now being joined by entire families and is sadly dominated by unaccompanied minors! Tens of thousands of young Eritreans who were press-ganged into indefinite military service continue their squalid existence in the harsh, desolate border areas four months after a peace treaty was signed with Ethiopia.

For the majority of Eritreans, the 27-year record of President Isaias Afewerki’s one-man rule has amply exposed his inherent qualities and the true nature of his regime both of which are appropriately characterized as arrogant, tyrannical, belligerent and cruel. If some citizens had been duped into worshipping the dictator or otherwise had held out hope he will eventually redeem himself, his recent actions must have opened their eyes to the truth: Obsessed with evil ambitions and in pursuit of his own glory, President Isaias lives just for himself – he holds little concern for the well-being of the country, of the people and even of his own family!

For the better part of the country’s post-independence years, the Eritrean people have endured levels of oppression, destitution and enslavement that only Isaias Afewerki’s brand of extreme despotism is capable of imposing. It is, therefore, hardly surprising that many Eritreans saw the rise of nascent democracy in Ethiopia last April (and its new government’s peace overtures toward Eritrea) as harbingers of positive change in their own country. They had high hopes that their own government would soon follow suit by easing up its suffocating grip on civil liberties and by introducing reforms if only to lift the country from the morass of despair.

Unfortunately, neither these public yearnings nor the emergence of favorable political conditions in the region could sway Isaias Afewerki to do good. Rather, true to character, he ignored the interests of the nation and set out to exploit those conditions to serve his own selfish agenda: break out of his self-induced diplomatic isolation and regain political legitimacy in the region – all while overseeing further entrenchment of his tyrannical rule at home.

Political disagreements between Eritreans supporting the PFDJ regime and those opposing it have centered on the philosophy of governance and involved questions of democracy and rule of law, civil liberties and human rights, economic development and social progress as well as war-and-peace issues. But, such disagreements appear to have narrowed substantially after the president signed bilateral agreements believed to have compromised national sovereignty thereby arousing public anger on both sides of the political divide. The regional diplomatic initiatives that yielded those agreements have also opened opportunities for domestic reform. Yet, the strongman has unambiguously shown that he is intent on neither addressing the people’s demands nor introducing even limited reforms of his own.

President Isaias’ frantic diplomatic maneuvers and international travels of recent months seem to be aimed at pushing forward his surreal agenda of emerging as a dominant political figure in Africa’s Horn region and even in the continent as a whole. His strategy for achieving this dreamlike goal appears to consist of: (i) inducing and encouraging Eritrea’s emptying of its youth, (ii) facilitating influx into the country of professionally- and financially-advantaged people from Ethiopia in the guise of “regional economic integration”,  (iii) promoting systematic erosion of Eritrea’s sovereignty intended to lead to eventual demise of the nation-state as we know it, and incorporation of its territory into Ethiopia and (iv) installing himself at the pinnacle of power in a bigger composite state.*

Isaias Afewerki’s self-aggrandizing vision of his own fate (Item iv above) is the wish of an egotistical leader at best and a delusion of grandeur at worst. But the machinations and conspiracies (Items i-iii) that he has set in motion to get him there are made doubly dangerous by their congruity with the wishes and plans of inimical external forces who have their own agendas to pursue. As such, they have begun generating political, economic, social and security dynamics which threaten Eritrea’s existence as an independent entity.

In the face of this existential threat and the cloud of geopolitical uncertainty hanging over the region, the paramount national concern of the day ought not to be PFDJ-regime’s governance quality or performance level. Neither should it be the implementation of the 1997 constitution, release of political prisoners or termination of indefinite military service. The supreme and most pressing national concern is saving the country from extinction! A desperate nation is crying out to ALL its children to fulfill their patriotic duty and pull it back from the precipice of doom and oblivion to which it is being pushed relentlessly by Isaias Afewerki and his cohorts. The self-described “pro-regime” and “anti-regime” political factions are being challenged to demonstrate, in action, the ’love of country’ that both groups claim underlies their respective political positions: to respond to their nation’s cries of agony by jointly mobilizing their resources and coordinating their efforts to ensure continuity of its existence!

Fighting the Causes of Eritrea’s Troubles

Seeking to rid their country of dictatorship, Eritreans have been waging a political struggle for nearly two decades amid relentless counter-campaigns by PFDJ’s intelligence/security agents and those of other nations that do not want to see a peaceful and democratic Eritrea. The effort has produced significant results which, though rarely acknowledged, have added up to move the struggle forward. The movement is where it is today because of the incremental progress that its constituent groups achieved over the years.

Sadly, the country’s problems have recently escalated into a crisis that threatens its very existence. It is therefore imperative that opposition groups undergo radical organizational and operational changes so as to transform their respective capabilities and effectiveness and, by extension, those of the movement. Key aspects to focus on include:

The grim realities of Eritrea and the dangerous impulses of its unhinged dictator should fuel an energized and accelerated struggle for change that takes note of: (i) The time when it made sense to plead with the regime for reforms is long gone. It is now time for radical change, not for cosmetic reforms! (ii) Opposition groups should embrace the maxim “desperate situations call for desperate measures” and earnestly purge themselves of fatigued leaderships, weak organizational culture, stale ideas, outmoded attitudes and lethargic functioning. In short, they should recreate themselves by undergoing self-renewal thereby empowering themselves to wrestle control of the country away from an evil dictator!

* For observations and analysis on the subject, refer to the earlier works of Professor Tesfatsion Medhanie and related literature.