To My Dear Son Selaheddin, 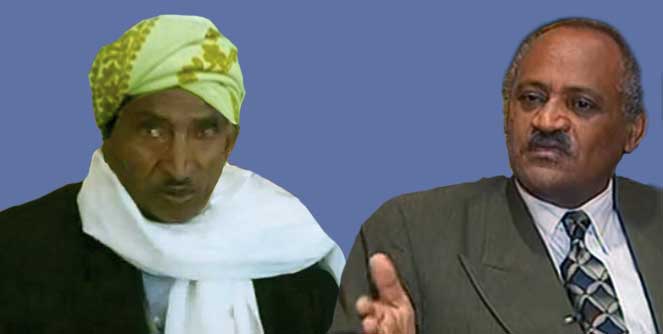 It has been three months-and-a-half since I’ve read the open letter that you sent that was meant to be read by all Eritreans, Selahaddin weddey. I keep it in my pocket and read it every day, because I draw energy from it. It gives me life. It gives me sustenance. It keeps me sane. But yesterday, I’ve heard of Haile Woldetensae (Durue) joining your camp, the camp of the martyrs. That jolted me like no other, which will become apparent why by the time you finish reading this letter. Please read on. I’ve heard Durue has been joyously received by his comrades-in-arms, you included. I am in a luxury hotel compared to what he has been through in that hell-on-earth, called EraEro since 2001 (here)

So, in my life, I’ve seen a lot. I have seen Eritreans fight courageously for four decades until 1991 when Eritrea, the land, was liberated. But the sovereignty of the land is incomplete if it is not accompanied with a freedom to live life with dignity under the rule of law. In the last twenty-six years, I’ve seen our country and its people be subjected to a debasement that I have never seen in nine decades that I have been blessed to live on this earth. I have seen and had been made to see the endless saga of crimes, disappearances, too many to enumerate here, sheer pandemonium has become the lot of Eritrea. But, nothing could jolt me I thought, not until I heard the passing of Haile Durue. You may know this. Haile left his Addis Abeba university education in 1964 to join the revolution, you wouldn’t believe with whom: With no other than the very person who is at the helm of power who has put him and 32 of his comrades to jail in 2001. Imagine, the cruelty of heart that one must possess to let one’s comrades-in-arms to be kept in the dungeons for 17 years to someone who fought for the independence of the nation along with this man for 27 years in the fields of Eritrea.

Little does this man know that just because we leave this earth doesn’t mean our spirit will not haunt him. You will see, I may not live long enough to see this. After all, I am only a few months away from 94th birthday. But, mark my word, Selaheddin weddey, the indomitable Eritrean spirit will undo this regime. Eritreans will, finally, find their voice, their freedom to speak, they will receive their country back and will make it heaven on earth. Let me tell why I am saying this: Soon after I said these immortal words, “ If the government is to take away the institution, it’s not possible while I am alive! I confirm I am ready to pay my life!! (ነዛ ቤት ትምህርትና መንግስቲ ክወርሳ እንተዳኣ ኾይኑ ኣነ ብሂወተይ እንከለኹ ከምዘይክእልን ሂወተይ ክኸፍለላ ድልዉ ምዃነይ የረጋግጽ), I knew I’d be hauled away to prison. But, I also knew – in my heart of heart – that Eritreans will not take it quietly. I knew mothers, fathers, the kids from Al Diaa school would rise up, but I also knew enough about the Eritrean character so much so that those who are abroad will also speak up forcefully because they have that freedom to speak up. Speaking up they did, my son. Those demonstrations throughout the month of November will forever be etched in my mind. Their chants – Muslims and Christians – alike carrying my picture and that of our Abona Antonios as their symbols of unity must have hit the man at the helm like a dagger right in his heart. You know he cannot stand any attention being given to anyone else other than him. Eritreans in the diaspora made me feel proud to be Eritreans.

And, my Akhriya community made me even prouder for standing up to tyranny all along knowing that they were going to be incarcerated, because the regime, the monster of our own creation is incarceration-happy. This is a regime that chose to build 361+ prison camps and counting and wanted to take the key of our community school away so it could turn it to what, into prison-institution – that’s what it is good at building, nothing else.

So, now that I’ve seen what Eritreans are capable of doing by standing up to cruelty; now that I read “The Rebirth of a Nation” that spoke to my heart from the diaspora, in how ready Eritreans the world over are. Here the last stanza that captured it for me, my son:

“…no worries no trepidation
You’ve set the pace you have defined the direction
Your own people shall accomplish the mission
Your own people will soon reach the destination
No worries, all is set the revolution is in full motion
The seeds you planted will in no time grow to fruition
The souls you stirred will never succumb to delusion
Now that you have cleared the path and restored our vision”

I know in your open letter penned on November 3rd, 2017, you mentioned that you were all happy to see me stay longer until the mission is accomplished. Read the entirety of the poem above and it gives a very clear sign, indeed, my mission on this earth has been achieved. Now that Haile Durue has joined the camp of martyrs, make room for me, son, I am coming to the camp of where the spirit of peace and tranquillity never dies. Eritrea is now in good hands. I am ready to live a life of spirit and soul. I know my passing will raise the ire of the regime, but the fire of Eritreans will rise from their bellies inside Eritrea and outside. I will be surprised if this regime lasts beyond 2018, certainly nothing beyond 2019. I’ve seen colonizers when they left packing, emperors deposed, socialist junta run away like scared cats. These Sakitists will soon go one way or another as well. And when that happens, Eritreans the world over will say: ‘GOOD RIDDANCE’ in unison and will return to their homeland in droves to build the nation. You, Taha Hawwey, and all those who paid the ultimate price will joyously celebrate and say to the living ‘way to go, kids, way to go! Now, show the world what you’re made out of.’ The spirit of Eritrea might have been bruised, but the nation never dies – It will vibrate with energy, soon, inshallah, my son.