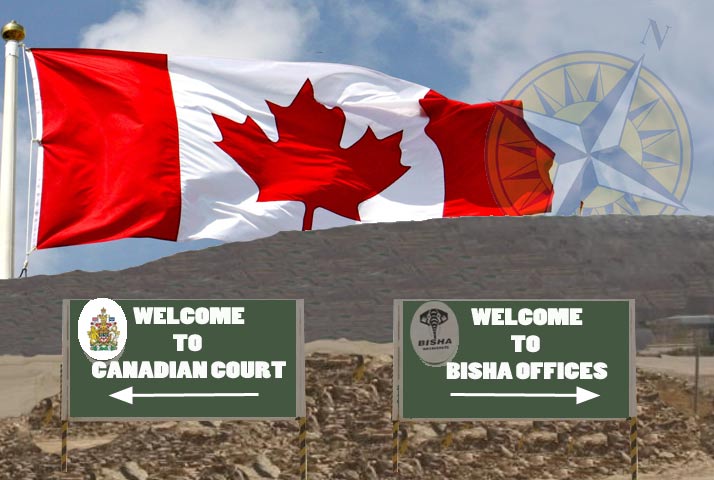 Today, October 6, 2016, the Supreme Court of British Columbia cleared the way to try the lawsuit filed by Eritreans victims to be tried in Canada.

The lawsuit was filed on November 2014 against Nevsun Resources Ltd, a Canadian mining company exploiting the Bisha mines in partnership with the Eritrean government.

Nevsun uses forced labor supplied by companies owned by the Eritrean ruling party which depends on the forced labor of Eritrean conscripts. In what the government calls national service, conscripts are forced to work in different government projects for indefinite periods.

Nevsun wanted to have the case thrown out of Canadian court system, arguing the court is not competent to see cases involving a foreign country and that the case should only be handled by Eritrean courts.

According to a press release issued by the Canadian Center for International Justice (CCIJ), Justice Patrice Abrioux rejected Nevsun’s request and ruled, “There is sufficient cogent evidence from which I can conclude that there is a real risk that the plaintiffs could not be provided with justice in Eritrea.”

The press release added, “This marks the first time that a mass tort claim for modern slavery will go forward in a Canadian court, and the first time a case against a mining company for alleged abuses in overseas operations has been allowed to proceed in British Columbia.”

According to the judge, the plaintiffs can “… call into question the actions of a commercial enterprise which is the primary economic generator in one of the poorest countries in the world.”

Joe Fiorante, Q.C., of Camp Fiorante Matthews Mogerman, lead counsel for the plaintiffs said, “We now intend to use the court’s discovery processes to conduct an exhaustive investigation into the truth of what Nevsun really knew about the human rights situation at the mine.”

Many Eritrean activists, including Awate Foundation, Elsa Chyrum and others have helped in gathering information and providing leads to assist in building the case against Nevsun. An Eritrean activist in Canada said, we are grateful to legal team, which included, “the Vancouver law firm Camp Fiorante Matthews Mogerman (CFM); Ontario law firm Siskinds LLP [Nick Baker]; Toronto lawyer James Yap; and the Canadian Centre for International Justice (CCIJ).”

In another story, on 27 October 2016, the UN Special Rapporteur on human rights in Eritrea will address the General Assembly. Meanwhile, Eritreans are preparing to hold a rally in New York in support of the Commission of Inquiry on Eritrea which submitted its report last summer in Geneva.

Refrence:
Press release by CCIJ
Canadian court to rule on Nevsun’s use of slave labor