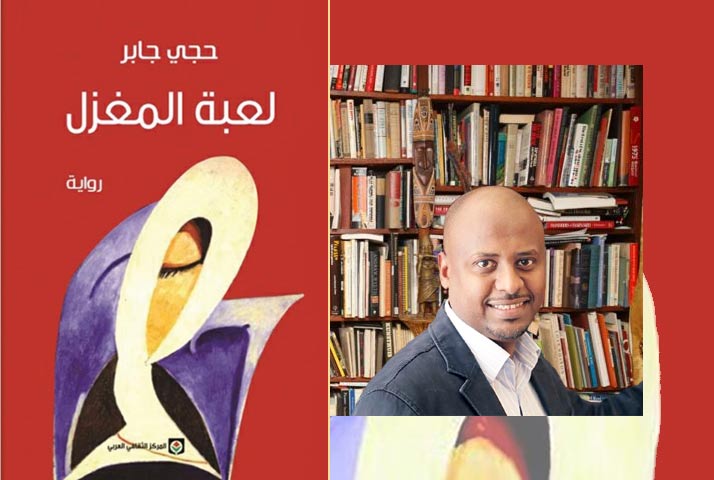 I read Haji Jaber’s third novel “Loubet Almaghzal” in which he narrates deeply and brilliantly about some diaries lost; diaries that make the history and memory of a nation. The plot and the characters are complicated and one has to read the book carefully.

The novel begins in Bahti Meskerm Square where people are gathering. The writer doesn’t tell us the occasion but as the president arrives surrounded by his body guards, a beautiful woman suddenly emerges from the crowd, runs up through the multitude and is able to get close enough to grab him by the neck. The president escapes her grasp; she is shot dead by his body guards. Collapsing, she dies with a smile on her face. She saw the fear in the president’s eyes as she grabbed him by the neck. She realizes that that fear will accompany him for the rest of his life.

The book begins where it ends.  Now the author will take us back to the beginning and lead us through circumstances that led to that end.

There is no name for the lady nor for any of the other characters we meet in the novel.

We discover that the lady was not only beautiful but also well educated and artist: a painter. She is an orphan, as her parents were martyred when she was only three. She was raised in luxury by her grandmother. The author tells us that the two: the grandma and granddaughter do not resemble to each other.  The lady has no clue as to the resemblance between her mother and grandmother as her mother was martyred a few days after her father.  This happened when she was only three.

Her education completed, she now works in a recently created government agency in which she is responsible for entering the diaries of the fighters for the struggle for the independence of Eritrea, into a computerized data system. She was hired to that job after the authorities conducted a thorough investigation on her. The diaries come in the form of bundles which are divided by color: brown, yellow and red. Each color means something with regard to confidentiality. The first color, brown was the least confidential, the second, yellow was more confidential and the third, red was highly confidential. The lady is responsible for the brown color which she finds very boring. The diaries describe the many battles in which the fighters were able to capture the enemy’s weapons.

She knows that those who are working on the other two colors are finding their work interesting. She decides to see what the two colors are about. She uses her beauty and charm to accomplish her goal. Obviously the men in her office including her supervisor and manager were attracted to her from day one.

She decides to go after the big fish and asks for the red bundles. Her supervisor, who told her in the beginning that everyone, including him started with the brownies and that she has to be patient, promised her that he would ask the manager if she would be allowed to work with the red diary bundles.

When she finally gets to see the red diary bundles, she discovers that some of them have been re-written by other editors, even by the president himself. Sentences have been crossed out, and above these sentences new ones have been added. There was a particular replacement that was unique.  It was in good script and according to the lady, was the writing of the president.

Diaries have been re-written including the death of the great Eritrean fighter: Ibrahim Affa in Agamet Mountain in Sahel and the relationship between the president and his god father: Osman Sabe.

One more interesting incident that our heroine finds while trying to enter a diary into the system is that of a beautiful lady fighter. Here there are two narratives. One is that she was good fighter, yet she wasn’t. The lady fighter dies but before her death she gives birth to a baby girl. No one knows who the baby’s father was. One narrative says that before her death, she was visited by the president who was seen coming out of the tent in which she was resting.

Our heroine gets her info not only from the diaries but also from her grandmother.

The grandmother, who had associated herself with the struggle for independence from an early age, has a lot of memories of the struggle.  She shares these with her granddaughter while she is working on her sewing machine or doing her granddaughter’s hair.  She starts to double check what she is reading in the diaries, especially the edited ones with the information that her grandmother has provides. For example, we find the story of the leader of the eastern front at Sahel Mountain. He submitted a plan to the high command of the EPLF in support of the northern front which was under continuous bombardment. The plan was rejected. But he was stubborn and went ahead with the idea though his mission failed and many fighters died under his command. Later, the fighters hated him for his non-calculated risk. The high command dismissed him from his rank but due to his past good command gave him a house in the prestigious side of Afabet Street in Asmara. That is what the edited diary says.

But the other narrative says that his mission not only saved the fighters in the northern front but also thoroughly destroyed the enemy. His plan was famous among the fighters but the high command was uncomfortable with it and dismissed him. However, due to his past good command gave him a house in the prestigious side of Afabet Street in Asmara.  The heroine visited the former eastern front leader in his house at Afabet Street and finds him in bad condition.

While the grandmother has become a good source of information to the lady, she is avoiding any details that are associated with her daughter and her son in law. For the grandmother, this was taboo. There was a time when our heroine insisted on knowing just who her parents were, but all she got was fragments of information here and there.

For example: her mom passed away in a state of insanity; there was a rumor around her morality circulating among her unfriendly comrades; and that rumor also hovered around her father.

The lady didn’t stop at only discovering the edited diaries, but she began to re-edit the edited ones, in a way that brought them back to their original form. She did that based on her analysis of the situation of each diary and with the information she got from the old woman. This was her game.

The other person is the doctor. The lady approaches him because she was having a terrible headache. The two become attached to each other to the degree that they agree to record some details about their lives on tape and share comments on each other’s tape.

She needed the doctor because of her illness, and he needed her because she was beautiful and charming. There is an inclination towards love and hate, but the two found something in between which made them good company for each other. The destiny of the eastern front leader, the godfather’s image, the great fighter’s fate in Agamet, the truth of the beautiful lady fighter and other diaries spin on her head like the spinning of a sewing machine made of mahogany. And, there is that terrible headache. She walks in the streets of Asmara but the streets give her no answers. The doctor can’t help but continues playing the recording of their voice game.

The beautiful data entry clerk is shot in Bahti Meskerem and dies smiling.

The doctor goes to the intelligence authorities and informs them that there was one of his patients who recently passed away smiling. He tells this to an intelligence officer who at first pays no attention. The lady, as the doctor told the officer, was half insane after a car accident. Still the officer hardly pays attention to him. The doctor then jumps to the core of the issue. He says that after the lady’s death, he received her properties and found among them confidential papers and recorded tapes. He tells the officer that he was curious and wanted to read the papers and listen to the tapes. It is to his surprise, he tells the officer, that he found very sensitive and detailed information that could harm the president. He also mentions that his patient, the lady, was visited by an old woman that authorities should move fast to arrest her and any others who could harm the president.

Review and translation by
Mohamed Edris