The Politics of Eritrea’s Independence Day 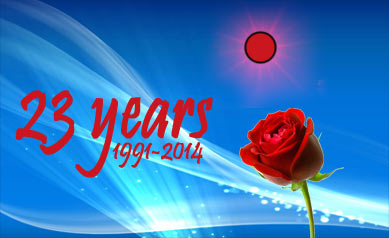 As it usually does, the Eritrean regime has been preparing for this year’s independence anniversary, which is unusually grand in its scope.

For over a month, the news and pre-celebration programs have been a regular stable on the government-controlled media, including the state-owned television station (Eri-TV) which has been running 24-hour coverage of the activities that are carried out in preparation for May 24 May celebration.

Each hamlet, village, town and city has a sub-committee of the national festival committee tasked to plan and organize the people for the upcoming celebration. The Committee is headed by Issa Ahmed Issa, the former Eritrean ambassador to Sudan.

Civil service offices were ordered to divert all their resources to the preparation and the committee was given full mandate to request support and resources from all government branches. As such, it is now all-too-common to find barely-functioning government offices turning away visitors and informing them that the manager is busy with the celebration committee and they should return after May 24.

Around the world, wherever the ruling party has a base, its supporters’ weekends have been consumed by meetings in preparation for the celebration. These activities are, in turn, covered on national media with identical headings: “Eritrean community members celebrate 23rd Independence Day anniversary with higher patriotic zeal.” The various localities then begin their meetings by discussing the state media coverage of their previous meetings.

Stadiums, streets and public offices are decorated with colorful lights and lamp posts have been adorned by hundreds of flags.

Gedab News talked to a shopkeeper who said, “The entire country is busy or made busy, but it is not as bad as a few years ago when they ordered us to put slogans.” He was referring to an order the government passed a few years ago to commercial entities to paint “Yohanna” on their shop front windows or walls. Yohanna is Tigrinya for congratulations.

Apart from the fact that Eritreans are ordered to be happy by a government fiat, there have been exceptional political activities inside Eritrea and in the Diaspora on the eve of the 23rd independence anniversary. The ruling party has been conducting public seminars and meeting all over the country. In Asmara, it has carried several large seminars where the leaders of the meetings pumped up the attendants (most of whom were ordered to attend) with heavy doses of propaganda telling them the list of things the government will introduce.

The seminars, which were held in Cinema Capitol and Expo, were chaired by Abraha Kassa, Director of National Security; Major General Philipos Weldeyohannes, who was recently promoted to Chief of Staff of the Eritrean Defense Forces (EDF) and Weldenkiel Abraha, Minister of Local Government.

Of note here is that the reclusive Abraha Kassa has been coming out front: when flights were cancelled from Egypt because a Yemenia airplane was blocking the Asmara Airport runway, he was one of two (the other being Yemane Gebreab, the ruling party’s political director), who was stranded in Cairo. Also noteworthy is that the seminars with the EDF were not chaired by the Minister of Defense, General Sebhat Ephrem, but by the Chief of Staff of the armed forces. This has added more cause to those who have speculated that General Sebhat Ephrem is about to be sidelined.

In the Diaspora, the opposition, which had for long celebrated Independence Day with small-scale picnics and had yielded the floor to the ruling party, seems to be poised to have a showdown with the ruling party’s operatives as to who can organize the biggest events and crowds. This is made possible by the fact that an increasing number of Eritrean artists have turned their backs against the ruling party.