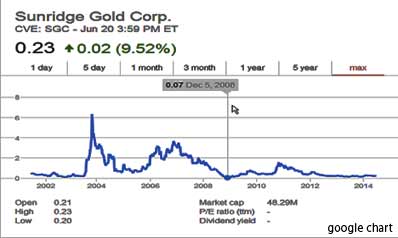 The Eritrean mining sector is wrapped in secrecy similar to all other sectors of the economy. The government has never published financial reports since the independence of Eritrea in 1991. As such, only investors who are willing to operate in shady environment are willing to invest in Eritrea.

There is no delineation between the interest of the “Eritrean government” and that of the ruling party which runs the entire Eritrean economy.

When the government is challenged to provide information on the investments in the country, it quickly reacts by letting its trolls off to confuse the public through the Internet. But sometimes it hires expensive lobbyists to polish its image and promote its interest.

At this moment, the main source of revenue for the government is the mining sector after revenues from the 2% taxes dried up.

The government imposes taxes on Eritreans living outside the country and foreign nationals of Eritrean descent.

The Canadian Sunridge Gold Corporation, which has a concession in Eritrea, has been facing difficulties in starting operations. Its operation is hampered by the UN sanctions imposed on Eritrea and by the worsening internal situation in the country.

According to many insiders, Sunridge is a “badly-managed company and cannot execute its business objectives.” Its has also put, “its entire investment egg in one basket: an unstable county that is under UN and EU sanctions.” Furthermore, operating in a country that has arrested its mining minster, Ahmad Haj Ali, accusing him to have taken part in a coup attempt, does not help investor confidence.

Sunridge’s stock has tumbled after the UN and EU imposed sanctions on Eritrea and never recovered (check the chart below). In a country where internal problems have been brewing for long and the security of the future is uncertain, it is very unlikely that Sunridge will go into production in three years time as it wishes.

Observers indicate that it is impossible for Sunridge to secure finance in the capital market either in the form of equity or debt financing. Therefore, Sunridige’s only option is to tread the murky waters of greedy usurious loan sharks who finance adventurous investments in Africa by partnering with dictators and tyrants.

Unlike the US, Canada does not have a strong federal SEC-like regulator but only weak disclosure requirements filed at a provincial level. Hence, the disproportionate number of shady Canadian mining companies (mostly owned by US citizens) operating in developing countries. Sunridge stays away from the US market because it cannot meet the SEC regulations.

In a press release it issued last year, Sunridge stated:

In 2013, Sunrdige managed to raise $3.5 miillion in a brokered deal (that might very well have come from loan sharks) and $2.1 million in non-brokered deal—a fancy way of saying the funds were raised from family and friends of officers who made millions pumping and dumping the stock over the last ten years ( see chart above).

Interestingly, 17% of this NPV is 72 million (minus extraction cost), a rather hefty price to pay when one is shut out from the capital market.

Sunridge has not provided development and production cost for its operation in Eritrea. It only provided on site operating costs of $29.42 per tonne average through the life of the mine and the average annual metal production over the first 8 years:

There is a man, from Tempest Capital Corp, who arranged the deal and is known as the “Agent” in the agreement; what did the this agent get?

According to Sunridge, it paid the agent a one-time 6% cash commission—that is $340,000 in the form of a ‘broker warrant’ of 4 million shares. That is not bad as the fee for such shark financed loans normally goes as high as 10%.

In February 2014, when its operational capital was not enough, Sunridge asked ENAMCO, the Eritrean mining authority, to pay for its 30% stake of the $18 million as well as an ongoing 30%, to continue its operations.

But Wanbao Run For The Fire Escape

After making the payments, ENAMCO invited Wanbao to invest in Eritrea and in particular in Sunridge. The hope was to arrange a forced sale deal similar to that of the Australian mining company Chalice sale to “China SFECO Group.”

Sunridge was targeting Chinese investors and hoped Wanbao would fall for the deal—that is why it prepared a brochure in Chinese which is posted alongside the English brochure on its website. (Check the brochure here)

But after a year and half of feasibility studies, Wanbao concluded that investment was not feasible and decided to leave. It can’t be blamed given the investment climate in Eritrea—mainly political instability and geo-political risk considerations.

As shown in  the chart, in 2004 Sunridge stock traded at $6. The UN sanctions was imposed on Eritrea in 2009 and since then Sunridge’s stock price has been going downhill until it settled at the floor of a gorge. Currently it is trading as low as $0.20—a mere 3.3% of what it was in 2004.

Does a company like Sunridge invite investor confidence? Of course not. But such a situation is an opportunity only for loan sharks, and reckless and adventurous companies.

After observing the tightening of the sanctions against Eritrea that contributed to the triggering of the Forto* incident, this time, China’s investors were smarter, they didn’t fall for ENAMCO’s bait.

Related links:
1. Sunridge’s English and Chinese brochures (accessed on 6/23/2014)
2. Source of chart
3. Eritrea Mining: China’s Wanbao Withdraws
* Forto is the appellation given to the failed coup attempt of Jan. 21, 2013.