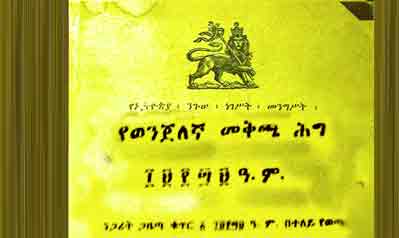 One of the most memorable revelations of Dejen Ande Hishel, the Eritrean Air Force pilot who escaped after 15 years of arrest without charges, was his realization (four years into his arrest) that, in Eritrea, to ask the government, “what are the charges against me?” is to commit a crime because your question is slandering the government as an entity that detains people without charges. But to a supporter of the regime, this is nonsense: obviously there is a law: everybody in jail in Eritrea broke the law and is, obviously, a criminal.  Obviously. But if that is the case, it suggests there is a Penal Code in Eritrea. Of course! Ok, what is it? Even the most ardent supporter of the regime is not sure. Having a definitive answer would help us understand if the regime is an outlaw regime; or if it is enforcing draconian rules that it never bothered to update. There is a name for such confusion when it is done deliberately: “constructive ambiguity.”

The Eritrean regime uses destructive evasion in its relationship with the citizenry. The government’s policies are whatever strikes the fancy of Isaias Afwerki at a given time. Of course, “constructive ambiguity” is not total chaos: there are parameters. For example, Isaias Afwerki won’t wake up one Monday morning and pardon prisoners. But in terms of how harshly he chooses to punish his enemies (or even to define his enemies), the rule is constructive ambiguity. This ambiguity is most obvious with Eritrea’s penal code.

When the Eritrean People’s Liberation Front (EPLF) and the Ethiopian People’s Revolutionary Democratic Front (EPRDF) stormed into the capital cities of their respective countries in 1991, the triumphant new regimes inherited two Penal Codes—one dating to 1957, which was authored by the Conquering Lion of the Tribe of Judah, Elect of God, Emperor of Ethiopia (Haile Selasse) and the other, a revision, dating to 1982, which was authored by the Provisional Military Administration Council (Mengistu Hailemariam.) By 2005, EPRDF had nullified the two penal codes and drafted its own: The Criminal Code of the Federal Democratic Republic of Ethiopia.

This is not a trick question: what is the law, particularly the penal code, in Eritrea? I direct this question to all of the supporters of the Eritrean regime, particularly those who are quick to say that so-and-so is in jail because so-and-so broke the law. What law? What is the penal code that Eritrea is using, 21 years after its international recognition as a sovereign State? Once we know that, we can deduce whether the Isaias Afwerki regime is breaking the law or enforcing draconian laws.

Everything I have read on the subject (corrections are most welcome) says that the Eritrean government is still using Haile Selasse’s Penal Code of 1957, with specified and unspecified revisions and amendments. The irony is multi-faceted:

The Eritrean regime doesn’t say that it is using Haile Selasse’s Penal Code of 1957 (at least not to the Eritrean people; it tells it to international legal bodies); it says it has revised them. The specified revisions are the series of proclamations the State issued: beginning with its first proclamation defining marriage (No 1/1991) to the Land Tenure Reform Proclamation (No 58/1994) to the Press Proclamation (No 90/1996) and, of course, the Constitution itself (ratified in May 23, 1997.)

The first “constructive ambiguity” is: are these proclamations themselves still valid or, have they, since the all-purpose “no-peace-no-war” banner was raised, been invalidated? Nobody knows: not even Mr. Yemane Gebreab, who is supposed to be a Very Powerful Man: just last year, he was telling us that the Constitution, with few exceptions (those dealing with national elections) is in full effect. Yemane must have forgotten the clauses that forbid the State from denying life or liberty to Eritreans without due process. Now we are told a new one Constitution will be drafted which will be ratified and implemented right after hell freezes over.

Is the Press Proclamation of 1996 still in effect? Maybe yes, maybe not. The Proclamation allows the State to suspend the press when there is “danger threatening public order, security and general peace caused by war, armed rebellion or public disorder.” Is that the situation in Eritrea now? Maybe yes, maybe not. It is all ambiguous. Some of the proclamations (like the one that deals with NGOs, for example) were themselves revised to criminalize even more people.

The second “constructive ambiguity” deals with the parts of Haile Selasse’s Penal Code that were never amended by any proclamation. This assumes that they are still the law of the land in Eritrea. Let’s deal with an authoritarian State’s favorite tool of control: accusing citizens of treason. Let’s see how Haile Selasse’s Penal Code defines treason:

So, when the Eritrean regime tells the legal world that its penal code is that of Ethiopia’s 1957 Penal Code with “revisions”, it might very well mean that all it has done is to replace the word “Ethiopia” and “Ethiopian” with “Eritrea” and “Eritrean.”

And since everybody we call a political prisoner is, according to the Isaias Afwerki regime and its official and unofficial spokespersons, a traitor who has committed high treason, then it is not surprising that they would claim (as they have) that it is only the regime’s kindness that is sparing the “criminals” the death penalty. Often, they act like they should be thanked for their magnanimity.

If all the revisions are replacing “Ethiopia/Ethiopian” with “Eritrea/Eritrean”, then, by definition, that also means that one more replacement was done to make the revision complete: replace “Emperor” with “President.” This is not a trivial matter because, according to the Penal Code, “Whosoever insults, abuses, defames or slanders the Emperor or the Imperial Crown Prince is punishable with rigorous imprisonment not exceeding five years, or in less serious cases with a fine not less than five hundred dollars.“

So, if you, socializing with friends, say something like “anta izi Tsulul sebaay neza Addi ketF’aa iyu” (This crazy man is going take the country to oblivion), you have slandered our Emperor, which is punishable by a 5 year prison term–which partly explains why people are terrified to even call him by name, referring instead to “nsu” and “iti [expletive deleted]sebaay.” If you write an opinion in the awate forum saying (as you will in reply to this column) something offensive about our Emperor, you most likely are guilty of high treason because, as everybody knows, awate.com, “delivers to the enemy, whether directly or indirectly, an object [an article] that aids the enemy.” You are a criminal who deserves a life sentence or death.

When the Press Proclamation was issued in 1996, we were debating why the State was reserving for itself the monopoly of TV and Radio and “only” allowing freedom of print journalism and completely silent on electronic/Internet journalism.  How quaint it seems now. We were debating that, while we like the Proclamation’s clear language that “Freedom of press is guaranteed” and “censorship, suspension or banning of newspapers and other press product” is prohibited, we didn’t like the language allowing the government to censor media “under special circumstances” which was too broad. Thus, when Ruth Simon, a reporter for AFP was arrested, we could cite the Press Proclamation to argue (as we did) that the government had no right to do so (“a journalist’s security may not been encroached upon”) because equating the journalist report about our Emperor’s saber-rattling with Sudan with an act worthy of detention cannot be said to have met the test of reasonableness.

Now, without a law to base our arguments on, all we are left with are Morality and International Norms. Both of which are, politically speaking, very problematic and easy to demolish.

Morality, the appeal to what is right, is a compelling argument to use—so long as the person making it has unassailable moral authority. Faced with a strong and compelling moral argument, the only counter argument the losing side has is to undermine the moral authority of the person(s) making the moral argument. This is exactly what the Isaias Afwerki regime is trying to do to the Eritrean Catholic Bishops (did they meet with their Ethiopian counterparts? Hmmmmm?) and pilot Dejen Ande Hishel (did the Ethiopians help him escape? Hmmmm?) That’s about it: it will never address their moral arguments: it will only attack their moral authority. This is the specialty of Sophia Tesfamariam: never address the argument a person is making, just try to present them (anyone who rises to a threat-level that she finds unacceptable) as morally compromised or, most likely, guilty of High Treason.

Using international norms and conventions is a mixed bag. In a world that has monarchs, tyrants, authoritarians, totalitarians, and electoral cheats; in a world that has a club to accommodate them (African Union, United Nations, Islamic Conference, Arab League, COMESA, etc.), our complaint that our Brute looks exactly like theirs is often given a shrug. Well, we say, in fact he is worse than even YOU! We cite international norms, declaration of human rights while we live in a world that accommodates and rewards those who flaunt it. (Remember, Libya under the presidency of Muammar Qadaffi was a member of the UN’s Human Rights commission. It might even have chaired it.)

Besides, those to whom the International Norm argument is being made, and those who are making the argument have different priorities and different irreducible minimums. For the former, it is a State with secure borders; for the latter, it is justice.

This goes to the heart of why the Isaias Afwerki regime chooses to be ambivalent about what law governs Eritrea: because it knows that both morality and international norms are of limited impact. Of course, when law is non-existent, and morality is unpersuasive, all that people are left with are the same options they have had since the beginning of time: flight or fight. And Eritreans, like all people living in war-stricken zones, have made the same choice: more people are fleeing than they are fighting because their life and liberty is worth more than the State’s existence.

Don’t get me wrong: moral arguments are quite persuasive. Sure, they will be enough to separate the regime from the people, but it is not enough to get them to embrace an alternative. Sure, the international community will condemn and censor, but the international community’s priority is not justice, but stability. This is why I keep saying that the least bloodthirsty, the quickest way to bring about change is one that comes from within the ruling party, the PFDJ, (a democratic coup) preferably using law—the 1997 Constitution—as a basis for change. Unless that happens, Eritrea risks being either a country ruled by Isaias Dynasty (like Cuba, North Korea, Libya, Syria, Iraq) or a country ravaged by civil war (like Libya, Syria, Iraq.) Neither choice is appealing, and those who are morally accepting of one choice make the other choice inevitable.