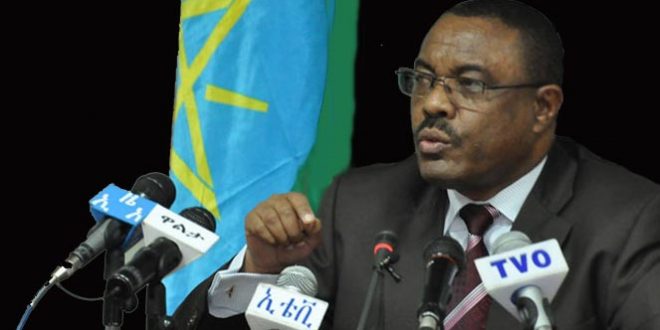 Until his election as prime minister, Hailemariam served as the chairman of Ethiopian Southern People’s Democratic Movement (ESPDM), a member of the ruling EPRDF coalition party.

The EPRDF is convening an emergency meeting to decide, and possibly elect, Hailemariam’s successor.

According to Ethiopian Diaspora opposition members, a few names are being floated in the corridors of power in Ethiopia as a potential replacement to PM Hailemariam. Among them are Teffera Shequte, the current minister of education, and Siraj Fegessa, the current defense minister. All three are members of the ESPDM. It’s probable that one of the two will replace Hailemarian Desalgn or at least finish the remaining two years of his term.

In addition to the two, the name of Demeke Mokonnen, member of the Amhara National Democratic Movement (ANDM) is also being floated as a possible candidate. However, not being a member of the Ethiopian parliament could stand in the way of his election.

Another remote candidate is Aby Ahmad, the deputy of Lemma Begessa. Both are members of the powerful Oromo Peoples’ Democratic Organization (OPDO).

It seems the EPRDF has recognized the need for an urgent political reform to cope with the increasing discontent within the country’s social and political components. Some Ethiopians say that in his six-years as the leader of Ethiopia, Hailemariam Desalegn was less encumbered by the political culture of the armed struggle that is generally undemocratic. He was not a veteran of the Ethiopian armed struggle that unseated Mengistu Hailemariam’s bloody regime in 1991.

During his tenure, Hailemariam Desalegn pursued the same development goals started by his predecessor the late Melles Zenawi. However, at the moment Ethiopia finds itself in crossroads due to the volatile ethnic and political strain in addition to the disparity created by the fast-economic development that has exasperated the security situation.

A retired Ethiopian politician said, “any disruption of security and violence, are likely to hamper reform and prevent a true transition to democratic rule, and the Ethiopian leaders recognize that.” He further remarked, “the PM’s resignation is a positive move that gave Ethiopians hope–this would not have been possible had he been a product of the armed struggle whose culture doesn’t encourage resignations.”

The PENCIL is awate.com's editorial and it reflects the combined opinions of the Awate Team and not the individual opinion of team members.
@@awate2
Previous General Salah Gosh Sworn in as Sudan’s Security Chief
Next Bridging the Intellectual Gap