Posted on September 23, 2019 by Chefena Hailemariam in Articles 47 Comments 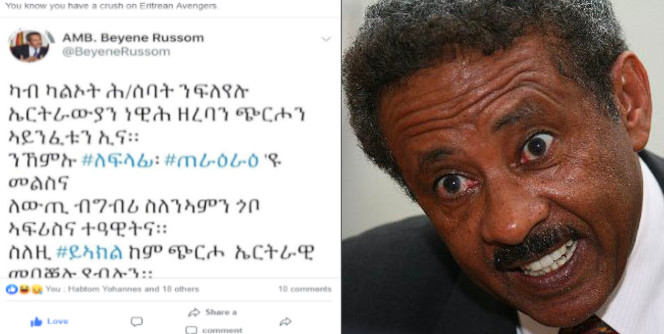 “ይኣክል” or “Enough” is a dynamic grassroots based process around which Eritreans globally are getting organized to make their voices heard and stand up against tyranny. Undoubtedly, the movement is marking visible gains world-wide as the fields of mobilisation get wider with  renewed revolutionary fervour.  But everything has not been rosy as its critics, have particularly assaulted the DC Yiakl Baito, at its very early developmental stage.   In a month-long talk the critics consistently called for the dissolution of the US-Yiakl Baito on the grounds that it is “infested” with some “cliquish” elements.  The talk starts with attributing the mess to vague agency and it gradually turns to become more explicit, it insinuates the social base of the “suspect community” which is this the focus this of article.  I discuss this issue in relation to how actors compete to gain control over the social meanings of words. Thus, the question “whose voice is being heard” and if voice is democratised is embedded in the discussion.  I start by highlighting the need to understand Yiakl phenomenon as both a voice, and an action, issue revolving around importance of defining the organizational status of such a movement are dealt with.  I then move on rhetorical analysis on the basis of the image presented by the detractors  of DC Yiakl Boito on various on-line forums.  In Part II, I make a case for a more open-minded and accommodating political debate that aims at understanding the politics of identity positioning.

At its inception, “Yiakl” or “Enough” was both an idea and a word.  It then evolved into action.   The talk and text, used in their social context, have their own social or political consequences and language certainly matters a great deal in so far as it positively or negatively shapes the socio-political structures of a society. One cannot discount the role of powerful discourses of Trumpism and Brexit and the ways they drew from anti- immigrant campaign that won them their votes.  Such narratives turn to become the carriers of populist and racist ideology. While the El Paso shooting has been described as an act of domestic terrorism inspired by the ideology of Trumpism, Brexit is a vote against globalization, against cosmopolitan elites, and anti-immigrant.

Far from being just an empty slogan, “Yiakl” is a linguistic action, and a rallying point with a visibly unifying function.   The ripple effect transcended socio-political boundaries to unite dives groups. It hit home, and as “the going gets tough” the resounding voices of the justice seeking masses unsettled the “tough”.   His cohorts  ridiculed Yiakl by  calling us ለፍላፊ  “garrulous” and  ጠራዕራዕ “braggarts”, they  couldn’t  hold us back even if they tried harder.

The “ኣብ ግብሪ” mantra i.e. “show me in action” or something to that effect, has been convenient distraction used by PFDJ as if to bully us.  Not anymore!

We will retort in the same way, and say, “the word matters, and it is through the word that you been in power for so long, you have been using language to divide-and rule us, a game you think you are good at”.  The Dallas saga is a case in point and Norway is following suit.  In an unprecedented fashion the ceremonial justice Minister was demolished and exposed for public shame.    But, as it did at crucial moments in its past, yet again, the Isaias group has come back with vengeance to incite tribal divide. Unfortunately, the PFDJ was not alone in this exercise. More than just a pushback, strong condemnation and accusation came from within the opposition.

Whose voice is being heard?

No sooner had the DC gathering ended than some disgruntled individuals cried foul. One of the vocal opponents of the formation of the US Yiakel Baito has been Mr KH. In several occasions, he  expressed his strong condemnation of the formation of the Yiakl Baito America on the grounds that crimes have been committed in the way the Baito members made their way to the body of representatives. And he consistently and adamantly called on the dissolution of the Baito on on-line forums and radios.

Also, what is not straightforward is, how the US Yiakl Baito was being “high-jacked” by some evil force, thereby sowing the seeds of “ethnicization”, “Somalization”[i] etc.  Many individual and civic organizations have been blamed for their attempts to “own” the US movement. An academic who stood tall against the tyranny since early 90s became the first victim of abusive remarks with an expressed aim to silence him[ii]. But the prime suspect in this story is some mysterious “a clique implanted” within the US Yiakl Baito.

The audio recorded discussion that Mr KH took central role  is too voluminous for it to deal with in its entirety. But, picking on the most telling episodes could offer some feel of the overall thesis.  I have to admit, it is not just the volume of the online material that poses difficulty but also making sense of the logical process followed by Mr KM  in order make a case against the status of the US Baito Yiakl.

If as claimed, what happened in DC constituted a crime, it then needs to be treated as such.  And whoever decides to go the bottom of it, the burden of proof is understandably going to be huge. By the same token, he/ or she has to accept that they are accountable for what they say.

For all intents and purposes, political discourses are never neutral.  More often than not, interlocutors have to persuade their audience that they are right and the other is wrong.  On this occasion, the stakes of the political discourse have been raised higher wondering into a territory that few had trodden into. It is about politics of identity, and more specifically intra-Tigrinya identity positioning and how that had played out in the recent US Baito Yiakl.

The Eritrean cyber community would have been better served if the topic i.e, the politics of identity within the Highland society, thought to be the most homogenous, was taken up in the Ngaba’ forum. As the name would indicate, I imagine that is what this forum purports to do. Unfortunately Mr KH missed the opportunity.

The innuendo that was leveled against the DC Yiakl Baito was so intense that some members were made to publicly disclose their descent and where their parents hailed from. Nonetheless, the level of forbearance they had to endure in the face such hostile is commendable.  And admitting one’s own mistakes is a courageous move on the part of the Baito members.

Well-meaning critics pointed out that there were some ‘irregularities and gaps in the process towards sending representatives to DC, but maintained that this was a movement they consider their own and they don’t want the momentum to wane.

Then there was a veteran of the armed struggle who came to the fore to give his frank assessment, constructive criticism, encouragement and guidance. It is an example of truly inter-generational synergy,  demonstrating what the wisdom, experience and political maturity of the older generation can offer to the young imaginative minds.