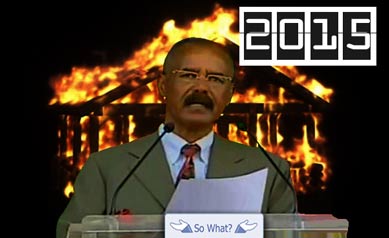 On May 28, 2005, on the occasion of Eritreans Independence Day anniversary, the following editorial appeared on awate.com under the title, “The Hidden Picture of Eritrea Under PFDJ” What has changed, or what will change under the current Eritrean rulers is everybody’s guess. But this may help to remind people what the issues were ten-years ago, and what the issues are today.

Every day, through the magic of media monopoly, the PFDJ paints colorful drawings of Eritrea. They are much like children’s crayon drawings: they bear little resemblance to the real thing but just as we would look with kindness at a children’s drawing (because they are children, after all), we are supposed to appreciate the PFDJ’s drawings (because they are our “liberators” after all!)  Every day, the state-TV shows reels and reels of films of a nation on a march: roads paved, wells dug, hospitals built, and ministers on an airport tarmac greeting the maestro who makes it all possible.  Thus, when the maestro takes to the stage, as he does on every occasion, it is no surprise that he would use the opportunity to provide further distortions.

We will not analyze Isaias Afwerki’s Independence Day speech because it has no new information or insight: it is the same formula of empty promises, excuses for the many failures, and self-congratulation for the petty “successes.” (We challenge anyone to find any substantial difference between his address of 2002-2005.)   The only cliff-hanger is who would be the new scapegoat to be added to the long litany of enemies.

This year, the “Orthodox Church reformers” joined their brethren previously classified in the enemy camp which includes greedy merchants, the corrupt civil servants, the spoiled students, the jihadists Muslims, the illegal minority religion adherents and the combatants who want a sheep slaughtered every Thursday.

The formulaic speech also includes one more feature: a stubborn refusal to acknowledge, much less address, that Eritrea is going through a major crisis. This is not accidental: acknowledgement leads to action, and action has consequences which may not necessarily be predicted.  A person who knows for certain that he or she is guilty of a major crime is least likely to call for an investigation of the crime.  He would rather talk about anything else—except the crime.   Similarly, the PFDJ leadership, which must know for a fact that it has caused, or shares major responsibility in the cause of, Eritrea’s current crisis is not willing to broach the subject.  Its strategy seems to be not to solve the crisis but to “outgrow it” by (a) totally disabling the accusers (either by discrediting us or waiting for us to die) or (2) totally changing the people’s quality of life so dramatically, that they will forgive and forget and move on.  In other words, the PFDJ hopes to use on the Eritrean people the same strategy it used on the members of the other fronts and organizations: waiting for (and, in some cases, bringing about) the death of the influential figures of their competition and then delivering something so magical—INDEPENDENCE—that everything pales in comparison.

The next magic act that was supposed to trigger the forgive-and-forget mood was DEMARCATION. The demarcation of the Eritrea-Ethiopia border was to be the substitute for INDEPENDENCE and, in fact, the PFDJ did everything in its power to recreate that parallel: (1) the TPLF, their former best friend, was given a new garb as if it were an occupying Ethiopian force indistinguishable from the Derg and Haile Selasse; (2) Tigrayans replaced the Amhara as the new “chauvinists” and “blood enemies of Eritreans”; (3) revolutionary era songs were brought back to life or mimicked by a new generation of artists (actually, government employees); (4) the 1998-2000 war, which had been described as border or economic war,  was now described as a war against occupation and, lastly, (5) the “everybody-hates-us-we-are-on-our-own” spirit was brought back.

From PFDJ’s standpoint, this strategy of escalation is a no-lose proposition: if the border is not demarcated, then it vindicates their view that this is really comparable to the Armed Struggle and we should not be surprised that it takes a long time to achieve.  If the border is demarcated, then it is another win for the indomitable PFDJ and since DEMARCATION is, according to them, a second INDEPENDENCE, then they expect an all-is-forgiven ticket from the people.

It is unfortunate that many in the opposition do not seem to have thought this through and they have convinced themselves that Eritrea’s lack of having a demarcated border and Ethiopia’s reluctance to abide by the Algiers Agreement is as hazardous to Eritreans, if not more so, than PFDJ’s enslavement of the people.  The PFDJ, with or without a demarcated border, is, was and will remain an authoritarian organization.

The second re-enactment from the Armed Struggle era is PFDJ’s strategy of “outlasting” its critics—by ostracizing them, discrediting them, buying them off with titles or causing/waiting for their demise.  However, barring exceptions, these combinations of threats and inducements will not be as effective as they were during the armed struggle because information is now more abundant and more easily deliverable.  The fawning Western media has been turned off by the PFDJ and the Eritrean dissidents have new ways (unavailable during the armed struggle) of delivering their message directly to the people.

This is where people like us come in: to provide timely and accurate information that contradicts the crayon pictures of the PFDJ.  Here below is a summary of key statistics that shows, conclusively and  notwithstanding all the fibs, exaggerations, empty promises, excuses and omissions conducted by Isaias Afwerki, Eritrea is very badly governed.    We will show here that the PFDJ and Isaias Afwerki are not fit to govern not only because they do not have the consent of the people  but also on the grounds of incompetence.  We will show that Isaias Afwerki has been woefully negligent of his duties: not only as a commander in chief (when he lost 20% of Eritrea) but also in his role as Chancellor of the University of Asmara (state of education); President (head of state) and PFDJ Chairman (head of the single “legal party” in Eritrea.)  And, unlike Isaias and PFDJ, we will not tell you “trust us”, but we will give you sources for our information.

This is the hidden picture of Eritrea, the part of Eritrea that the state media, the PFDJ and its chief and flunkies work so hard to ignore or pretend is not true.  And every year, the picture keeps getting clearer and clearer but also uglier and uglier.  And, every year, we will be reporting them, as our version of rebuttal to the president’s speech.

All data (excluding commentary) for categories 2-8 derived straight from nationmaster.com. In some cases, the rank does not make sense as you will see a fraction like 219 out of 165. Follow the link and you will get the whole listing.

If you want to read the entire reports that were excerpted in category 1 (Governance) regarding PFDJ’s record on human rights, civil liberties, religious freedom, trade unions and freedom of the press, check out the following links:

Freedom House: “Worst of the Worst: The World’s Most Repressive Societies, 2005”
US Department of State (report 1 for 2004 and Report 2 for 2004:)
Amnesty International:
Human Rights Watch:
Committee To Protect Journalists:
Reporters Without Borders:
International Union of Food, et al: