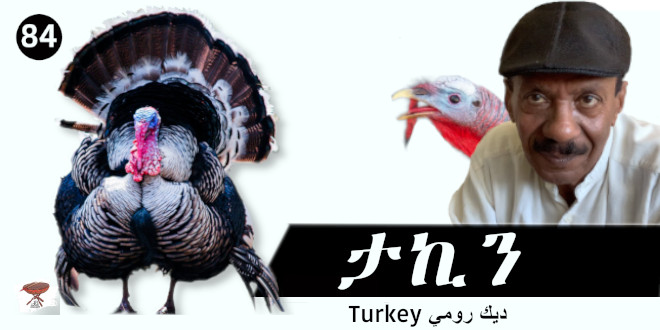 A few years ago, I learned that whistling is a form of communication within a few societies. One such group resides in northern turkey and a few others in the bordering countries. It’s amazing how efficiently (and effectively) they communicate. But I wonder if they communicate with whistles. And that took me to turkey birds.

These days wild animals are behaving a field day roaming in city streets they never considered getting close to. During the last few weeks I was amazed to see wild turkeys carelessly scavenging in empty parking lots. As children, my friends and I whistled to turkeys and watched them gobble. Maybe they were communication something, like the Turkish group; we were not.

Growing up I had a lovely aunt who raised turkeys. Her customers were Italians who flocked to buy her birds. Some reserved a bird for Natale, Christmas. Eritreans never cared for turkey–chicken was the preferred bird. And unlike the Americans who would not pass Thanksgiving Day without a turkey meal, the Italians did that on Natale.

One day after the eggs hatched, aunt Lemlem pointed at a chick and said it was mine. And since all the chicks looked alike, she tied a colored thread around the leg of my chick. I wondered if it will gobble someday.

During the last few years Eritreans have been subjected to savage attacks by racists, fascists and bigots who have been lurking beneath the surface for a long time. Now that the Eritrean ruling party is exposed to the bone, as a system run like a private property surrounded by inept servile functionaries, the fascists think it’s an opportune time to dismantle Eritrea and impose their archaic dreams on it. And they have kahunas who preach hate and racism empowering them. For the ignorant crowd, the hate speeches have captivated their imagination tom the extent that some are daydreaming about a racist state built on the ashes of Eritrea. Sadly, they get some push from senior officials within the TPLF, the ruling party of the Northern Ethiopian region of Tigrai. And they will continue gobbling like Turkeys every time the whistle blowers send a signal.

Eritreans should not mind the turkeys very much; they should defeat the whistle blowers who are filling the heart of many naïve turkeys with hate.

Abundant agonies… followed by tears of relief, joyous smiles, and happiness.
Nomads yearning for a pleasant breeze of hope… a storm of hope.
The sun above is sometimes scorching… sometimes bright, but never dull.
It is a dark night… a black sky, though a few stubborn stars refuse to die.
Then… a promising dawn…and a beam of hope engulfs the mysterious twilight.

And a trickling shower of hope dribbles across the barren desert.

On the distance, a magnificent mountain, high and proud… refusing to crumble.
It overshadows the equally proud coconut trees in the valley below.

They sway on the banks of the dry riverbed,
On the white sand stained by innocent blood and wetted by pious teardrops.
This lazy river never floods not to expose the bones of courage buried underneath…
And the pride whose spirits floats above.

These meandering trails curved on the slopes by the delicate legs of antelopes,
And by the bare human feet tucked inside light plastic sandals… or crushing boots.
These trails that lead to nowhere, but they also lead to everywhere!
This serene forest, of wild trees, blooming flowers, singing birds, and nightingales.
Vast plains full of gazelles, honey, wild beehives with absent queens.

On the side, wanderers decide to rest for a while and light a campfire.
But the stubborn wet wood refuses to ignite dashing their hopes for a huge bonfire.

Then, there comes young shepherds, herding animals bigger than themselves.
And a lonesome nomad watching it all from his tent while he sheds Tears of Joy and Fear.

And from the hilltop I enjoy the magnificent picture.
But then comes the unavoidable moment that hides the scene.
I laughed…  though engulfed by darkness the picture is still there.
It’s just hidden by a brief BLACKOUT!