Posted on September 15, 2013 by Semere T Habtemariam in Perspective 11 Comments 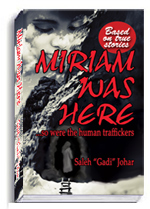 As the last glint of hope vanished, they whimpered, fully aware that death was closing on all of them. They have never been so sure of the inevitable. There was neither a sudden surge of fear rippling through them nor a riot of doubts crashing on them; they just were sure and clear of what was to happen. They have travelled the helluva desert with those who shamelessly profit from human lives, and now they have to face their final fate without the slightest trace of pride or sense of accomplishment.

No one can accuse them of not fighting for life; it was the reason of their predicament, and what drove their odyssey across national borders in the first place. They started their journey on the wings of hope, but fate had decided to jettison the non-essential cargoes. Make no mistake, they did not throw in the towel; they just resigned, and as the ultimate verbal representation of their resignation they had to scribble on the walls the immortal words: THIS TOO SHALL PASS. It is a way to refute their dehumanization.

It is poetic, philosophical and profoundly human. The quest for immortality has been with us since time immemorial, but it has proven to be unattainable, and the closest we have come to it is through memory: no one wants to be forgotten. In our tradition, we bitterly mourn those who die without bearing children for they are more likely to be forgotten: smom nqedmiom. It is for this that many of our brothers and sisters in the deserts of Egypt and Libya have written their names on cave walls—they want us to remember them.

If any of you have wondered over the years why Saleh Gadi Johar belabors the issue of reconciliation, then look no further, Miriam Was Here is your answer. It is an Eritrean story which will resonate with every Eritrean regardless of persuasion and background. For those of us who have the privilege of knowing this rare Eritrean up close and personal, the book is a reflection of his political thinking. It is an honest expose of his inner personal thoughts of how things are and how they ought to be in Eritrea. It is a serious book beautifully told by one of Eritrea’s best story-tellers. True to his Kerenite root, Saleh Gadi Johar can tell a story with the raw integrity of the truth.

In Miriam Was Here, one finds the common themes which have become the stable of his writing and activism. The book acknowledges the many multi-faceted factors that have compounded the problem; nevertheless, it argues that the problem is inherently political that needs a political solution. One is constantly reminded that an understanding of the origin of the problems is the best way to ensure the prevention of anything similar from happening again. Oftentimes, and in the words of Josh Billings, the 19th century American humorist, “It ain’t ignorance that causes all the trouble in this world. It’s the things people know that ain’t so.” Saleh, through awate.com, has made it his life’s mission to “Inform, Inspire and Embolden.” In Miriam Was Here, he has succeeded.

Saleh Gadi Johar has become a crusader for freedom and justice for Eritrea. The twin ideas are deeply rooted in the belief of human dignity and the sanctity of life. Nowhere is the violation of this principle more visible and extreme than in the practice of human and organ trafficking. It has shocked our conscience and incited our moral outrage for it undercuts at the core of our humanity. It is, in the words of President Barack Obama, “a crime that amounts to modern-day slavery.”

For those who seriously seek understanding, Saleh Gadi Johar’s latest book is a feast of intellect that will keep you on the edge of your seats.

Miriam Was Here goes beyond the usual headlines that rightfully stir our emotions, but oftentimes make the obvious obscure. It delves into the root causes that have led to our sorry state of affairs. It compels us to come face-to-face with our ugly and shameful realities of why a bonafide hero like Zerom would leave a country he helped liberate and emigrate to America; and why the daughter of a legendary Tegadalay, Miriam, would become a mahyo, a courtesan, serving the new class of rulers in Eritrea, Zerom’s former comrades.

Miriam Was Here is engaging and profoundly insightful book that will be read long after all of us are gone. It has done justice to those who have written their names on cave-walls: they will not be forgotten. With this book, Saleh Gadi Johar has assured himself a place in Eritrean history. Future generation of Eritreans will say Saleh Gadi Johar was Here.

Semere T Habtemariam is the author of Hearts Like Birds and the forthcoming book on the History and Faith of the Orthodox Tewahdo Church of Eritrea and Ethiopia. He can be reached: weriz@yahoo.com