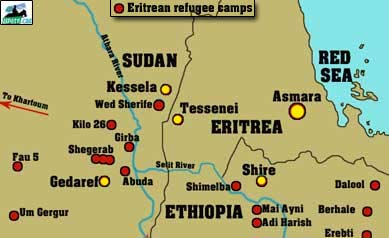 On December 24, at least eight Eritreans died when their boat capsized in the Atbara River in Sudan and their smugglers, criminal elements of the Lahawyeen tribe of the Rashaida, held the surviving four as captives for ransom.

Enraged, Eritrean compatriots encamped at the Shegarab Refugee camp in Eastern Sudan “attacked a neighboring village inhabited by the Lahaweyeen tribe accusing them for being responsible for the death of their compatriots,” according to an Eritrean website Adoulis.com.

“The ensuing bloody confrontation resulted in a number of people from both sides being wounded,” added Adoulis.com.

During the unrest, the United Nations High Commissioner for Refugees (UNHCR) has been denied access to the camp by Sudanese authorities.

A week earlier, the same criminal gang had raided the refugee camps and kidnapped 16 people.

Sudanese authorities, who normally outsource security of the region to the warring Lahawyeen Rashaida, have gotten involved: they used tear gas and live bullets to disperse crowds.

Residents of the Shegarab refugee camps have appealed to international community to protect them from the marauding gangs and from the Sudanese security officials who are colluding with the criminal elements of the Lawhawyeen Rashaida.

According to the UNHCR, there are over 117,000 Eritreans, with over 1,000 new arrivals estimated every month, spread out in three camps (Shagerab 1, 2, 3) in Eastern Sudan.

The Atbara River is joined by the Setit/Tekeze river north in the Al Gadaref province, close to the Shegerab refugee camps. Tekeze/ Setit forms part of the boundary between Eritrea-Ethiopia and runs the course to join the Atbara river that joins the Nile River in the town of Atbara.

Sudan has been hosting Eritrean refugees since 1967, when they first arrived to escape Ethiopian bombardment of their villages. The new arrivals are Eritreans escaping forced conscription and bleak future in Eritrea. Over 90% of Eritrean applications for refugee status in East Sudan are accepted by UNHCR.

The Lahaweyeen tribe of the Raishaida were given land to settle in the region by the “Shukria” tribe. With a reputation for being a warrior class, the Sudanese authorities use them as a buffer from Eritrea and Ethiopia in the East and the Beja tribe in the North.

In the 1980s, the Eritrean People Liberation Front (EPLF) used them to hunt down and capture defecting combatants and, according to some sources, Isaias Afwerki uses them to deal with escaping Eritreans.

Death notices are plastered all over Eritrea as a result of the fatal gunning down of 13 Eritreans who were attempting to escape via the Gindae-Port Sudan route.

Gedab News has already reported on the three sisters who were part of the 16 Eritreans and who were gunned down by government forces while on a vehicle. Subsequently, Eritrean website asmarino.com identified the names of the three sisters as: Ariam, Rita and Hossana.  We now have information on the identity of two additional Eritreans who were killed: Henok Mengestab, 17, and Samuel Yonas, 18, who were best friends and recent graduates of the 27th Round.

The two left the country before the government announced the test results, despite being top students who could be admitted to the academic colleges.

We have also received information that the vehicle they, and 14 others, were traveling on was a military vehicle. It is common knowledge in Eritrea that people with means can commission a corrupt military officer to transport them from Asmara to Khartoum, barely stopping for roadblocks.

Gedab News is able to report that the three individuals who were not killed in the incident are accounted for: they were injured in September and had been hospitalized, north of Keren, since. They were released in mid- December.

There is now speculation that the government was forced to release the information on the death of the 13 Eritrean children, three months after the fact, because it knew that the surviving members would spread the word.

We have also received information, though unconfirmed, that most of the 16 youth were members of the 27th round (which means they are mostly 17 and 18 years old.)

Previous Military Clashes Inside Eritrea
Next Who Will Speak for the Voiceless Eritreans In Sudan?