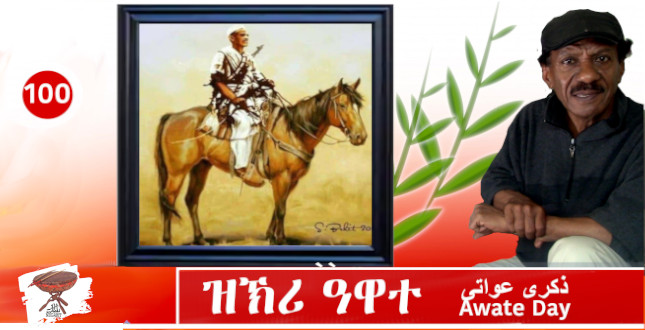 Happy September 1 for all of you.

Our culture teaches us that one who is not grateful to fellow human beings is unable to be grateful to God.

As we all know, Hamid Idris Awate is not only a martyr. He is not only a heroic leader. He is not only the man who started the armed struggle. But he is an embodiment of the spirit of struggle that should lead us all. And the legacy of Awate and his spirit, is bigger than his name or what he did. That is why I believe we should adhere to his guidance and hold his legacy diligently and with utmost respect.

When Eritreans started the armed struggle, they had no idea the journey would take this long. But considering what the straggle faced–regional and international interference, and political conflicts among the many vested parties–the pursuit for freedom become a long journey.

Furthermore, we failed to successfully challenge the post-independence oppression, so far. However, we can’t watch the situation as bystanders, and we must continue struggling to achieve the freedom and liberation that Eritreans earned. But one does not stop a struggle midway; it is a journey that ends when one reaches the destination, and time of reaching the destination depends on many factors. True patriots do not drop out because the going gets tough, or because they faced demoralizing developments.

Naturally, people do not wage a struggle for a fixed period of time, with an end date appointment; a struggle  continues until one reaches the end–we must print such beliefs in our mind.

Those who are too young might not have a clear picture of Awate because as time passes, historical events and their context become foggy or purposely distorted. Preferably, our historical narration shouldn’t have been partisan. It should not have been used to defame and vilify actors and actions that doesn’t serve a certain partisan interest. But it was not so, and that has hurt our collective knowledge of our past and we couldn’t develop a common narration. Sadly, after the independence of Eritrea, we were not lucky to have an enlightened and wise leadership, on the contrary, we have to deal with a partisan clique that prefers to live in the past. For those of us who grew up following the heroism of Awate, his influence is immensely present in our psyche and character. Here. please note that my experiences are not necessarily individual to me; I share it with my peers, my generation, and the generation before me.

I believe it time that we came to terms with all aspects of our history—it’s good, its bad, and its ugly parts—and we must learn from it. That is why on Awate Day, we must remember the cause of our struggle and renew our commitment to the rejection of subjugation and oppression. We should remember that the struggle was to uphold individual freedoms, to implement rule of law, and to eradicate fear and anxiety. Unfortunately, we haven’t achieved these ideals though in time, we will certainly do.

What was the history and experiences of my generation?

Probably because I am inquisitive, and maybe the situation was favorable for me to learn the tough lessons, and my character is shaped by  my childhood and adulthood. But since there were many people who had influenced my thinking, I would like to acknowledge a representative sample of them, just to satisfy my urge to show my gratitude–it’s our culture to do so. However, culture and tradition is not something you hold to or reject wholesale; we must be selective in choosing what to keep and what to reject.

I dedicate this episode to my martyred friend, Bashir Osman Neberay.

In the time when I was financially stable, I had wishes to build a memorial for Bashir, in a form of a school or a library in Barentu where he fell fighting the occupational army—I hope someday I will do that. The background outro and intro music Negarit 100 is dedicated to my friend Bashir. I wrote the lyrics (poem) and my talented youngest brother Ahmed Abdulrahim composed and played the song. But Bashir is a representative sample of many of my peers who fell in serving the cause of their people. Unfortunately, the ruling party does not encourage mentioning and glorifying our heroes individually; they would rather have people remember the martyrs collectively, as numbers, faceless and nameless.

Particularly I would like to remember Ustaz Mohammed Mranet, who recruited me as a member of the struggle when I was a young boy. After the independence of Eritrea, the PFDJ regime arrested Ustaz, Mohammed, a respected man and a judge, and nothing was heard of him ever since.

All my respect and gratitude to all of the heroes and heroines.

I also want to remember my late father Abubaker Abdulrahim who raised me in an environment of patriotism, selflessness and perseverance. I am what he raised me to be and I am thankful, proud that he, together with the people I mentioned above, shaped my character.

In 2000, we named this website after the giant hero Hamid Idris Awate. At the time, I faced vicious attacks and vilifications because I dared to resurrect Hamid Idris Awate’s name that they wanted to be forgotten. That name as supposed to be obscured and erased from our memories, but I decided to challenge the erasing of our legacy and did my part. What I went through because of that decision is too painful to remember. But to what extent we were successful in protecting the name of Awate, I would leave for the observers to decide.

Twenty years ago when the Internet was not this developed, and when cellphone era was not yet upon us, the internet speed was 512kb. Before fake news, and other defamation mails, the supporters of the regime used other tactics to disrupt our operation—they regularly flooded our email boxes with large images and spam and regularly caused our system to crush or freeze, thus wasting our time.

The second thing worth mentioning is how we broke the taboo of having pictures of leaders on the Internet. Until then, leaders avoided having their pictures published—the first opposition leader whose digital picture appeared on the internet was the late Seyoum Ogbamichel. It took us too long to convince him to have his picture taken when we conducted an interview with him in San Jose. When he finally agreed, we had his postage stamp size picture appear along with the interview. The taboo was broken, and soon people were so happy to have their pictures on the internet. However, we had no idea we will arrive at the narcissistic age of selfies!

The third major thing I would like to mention is awate.com’s role in documenting for an era. We have thousands of files in our archives and we can only imagine how excited future researchers and students will be to have it. Thanks to awate and other responsible websites, the narration of post-independence Eritrea is not monopolized by the PFDJ, there are many perspectives in the archives.

Many people do not know (or do not appreciate) the efforts that goes behind running a website. It takes a clear vision, relentless work, and selfless service. Anyone can launch a two- or three-page website, but running it is a different challenge. During the last two decades, I have spent at least 30,000 hours in running awate.com. Once a man asked me who pays me? I told him it’s a labor of love, a public service. He mocked me: imagine how much you would have earned if you just flipped hamburgers in a joint for $12 an hour! He thought I was foolish to work for no pay!

In addition, imagine the hours that my of my colleagues and volunteers put behind awate.com? I can comfortably say it exceeds 100,000 man-hours. Awate.com is what it is because of the wide network of friends, colleagues and sympathizers. Thank you all.

But recently we have arrived at the age of satellites and I think there are over a dozen entities and individuals who have said they will go the satellite television path. All power to them. But in the Eritrean situation, it’s not only that political organizations that mushroom, media outlets are even worse. Anyone with a cellphone and a Facebook account can think of themselves as CNN. But believing that illusion has proven to be detrimental to the information flow and political well-being of Eritreans. It’s good to express one’s views… and diversity of opinions are good for the development of societies. However, without a sense of responsibility, everything is wasted in vain.

We struggle because we have conscience and we do not want our conscience to hurt—people who are content with their conscience sleep like a baby. WE must strive to have a guiltless conscience. We have an unfinished job and we must keep working. But every now and then, we need to stop and assess or performance and implement corrective measures.

And before I end this, please note that we have no sponsors, no NGO’s, or deep-pocketed interest groups that fund us. Our $12,000/year budget is self-funded with the support of our readers and friends of awate.com. This year, since the outbreak of the Covid epidemic, we haven’t campaigned for fundraising, (we are not good at that anyway). Therefore, we urge you to support awate.com to reach its yearly goal so that we can stop worrying about expenses and instead spend our time in what we are supposed to do: creating content.

Finally, what awaits us ahead is not more difficult than what we went through. Stay focused, and let’s hasten the day when our people will be free, and truly liberated.