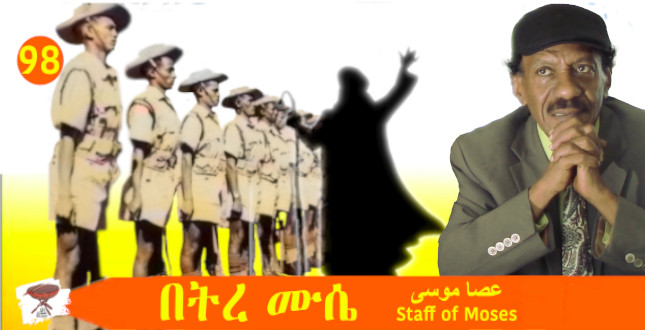 After WW2, the British Administration left Eritrea a sufficiently trained police force known as field forces. Their training and mandate were limited to civil criminal offenses and enforcing rule of law in the country. They didn’t train them to pursue political rebellion, and as such, when the Eritreans Revolution started in 1961, they were ill prepared to deal with it.

Due process of the law and the general civil and criminal laws was by far superior compared to what Eritrea has been going through since then. But the gradual dissolution of the field force, popularly known as the Senior police Force ushered the country in a military rule. That military rule that continues in one way or another to this day, thirty years after “liberation.” Ironically, in the early sixties some semblance of rule of law continued to exist in the country; even rebels caught in battles had their day in court where they appointed lawyers and argued their case–there were several known Eritrean lawyers, for instance Ato Tzeggai Iyassu and Ato Mewael Mebrahtu, who challenged the courts in defense of their clients that the Ethiopian army caught in battles, or in acts clearly aiming at liberating their country from the grip of Haile Selassie’s occupation.

Later, the occupation army slowly spread its control all over the country and sidelined the senior police. In their place, the occupiers set up rapid deployment commando units and set up large garrisons manned by the Ethiopian troops.

The senior police, recruited from within the community, had a sole assignment of enforcing the civil and criminal laws. So connected with the communities, they passed military intelligence to the rebels of the Eritrean revolution and carried messages of the political prisoners to their relatives. They would alert the relatives to wait on the street on a given day when the prisoners appointment with the court, and they will meet with them on the way. However, when the occupation became unbearable, the senior police joined the rebellion with catches of arms they took along from the police stations.

The police were unarmed but carried batons, just in case

I grew up  in neighborhood where a dog named Ambess made my life unbearable. He hated me so much that I had to avoid playing in the alley because Ambess lived there and controlled it like his individual property. When the rest of the children moved around freely; the mean dog, Ambess, restricted my freedom.

Once a friend encouraged me to pet Ambess, to approach him calmy and befriend him! It was a difficult feat. My friend kept nagging me to try and finally he convinced me to give the dog some food, meat for example! Okay, that was not difficult. I spend my allowance and bought a piece of meat and ventured into Ambess’ alley. The moment he saw me, he stood on his paws growling and all his teeth showing. The friend encouraged me to continue walking calmly; then I dropped the meat in front of Ambess. He started to eat the meat and I decided to try petting him, rubbing his back with one finger at a time until I rubbed his back with my hand. Everything seemed to be going well until he finished eating the piece of meat. Then he wore his mean face again and was about to jump me. I turned back and run as fast as I could; my attempt to befriend Ambess failed miserably.

My great uncle who was aware of my problem scolded me for being a coward.

What should I do?

Dogs do not like cowards, show him some courage and he will respect you. “Al Assaya Kherejet mn Aljena’ he told me.

That is an Arabic saying—the stick descended from heaven, which means it’s blessed.

The courage thing… I thought about it for a couple of days and finally took the advice. ‘The drama should end,’ I decided. And armed with a stick hidden behind my back, I walked to Ambess’ alley and walked straight towards him. He stood up, and as usual, he growled and walked towards me. But that day I was determined, no more humiliation. And the moment he came closer, I held the stick high in the air and landed it on his back. He wailed in pain and run towards his house. Excited, I chased him until he was out of the alley. I liberated the alley and returned home proudly.

Ambess’ owner was a good friend and if I had told him the story, he wouldn’t have taken it lightly. But he kept wandering when I started to visit his house often, without worrying about Ambess as I did before. The entire household was wondering but I had a secrete to keep.

So, that stick that descended from heaven was helpful; and I see a few Eritreans contemplating using the stick to regain their freedom and reclaim their country from the tyrant whom the Derraz aids.

In voodoo witchcraft, when someone want to control a person, the voodoo doctors tell the client to bring a rooster. They read some codes over it, then they smoke it with incense and other superstitious fumes and pour strange liquids over it. The client is supposed to carry the rooster and meet the person he wants to control. Once he does, he somehow rubs the rooster on the body of the victim. It’s believed that from there on, the victim will be under the control of the client.

Mostly, the witchcraft swindlers market such services to men and women trying to control their spouses or lovers. Our society despises anyone perceived to be weak and they call such people Derraz, rubbed or Possessed. It’s a very shameful insult reserved for weaklings and persons who do not realize they are free—they can’t live outside the control of others, be it individuals or entities. In our case, the PFDJ regime controls our Derraz and they justify its aggression and curtailing the civil liberties of a “free people”! They instruct them to hail Abiy and they will repeat “Abiy, Abiy, Abiy.” And if tomorrow they their cult tells then the cult leader is at odds with someone, they will amplify the cult leader’s fury. They take orders and overpass the function of the brain.

The Staff of Moses,

Moses had a wonderful stick that confused the pharaoh when he turned it into a snake. He further used it to part the red sea and escape with his people to the other side of the shore. As most people know, The Staff of Moses, or stick, did marvelous jobs. However, I can see its applicability in our region is a risky business. Once conflict is ignited, putting it off will be a big challenge. That is why I hope some wise and brave people will bring about the overdue change with little cost and save the region another fire spot.

The situation is becoming more volatile by the day. And oppressed people will not take it indefinitely. Someday, someone will snap and start the fire. But them, the whole country will be at risk given the situation in Sudan, Ethiopia, and Yemen–all three bordering Eritrea.

On September 1 we will have a double commemoration: Sep 1, 1961, the day Hamid Idris Awate ignited the Eritrea armed struggle, and the day we launched Awate.com on Sept. 1, 2000.