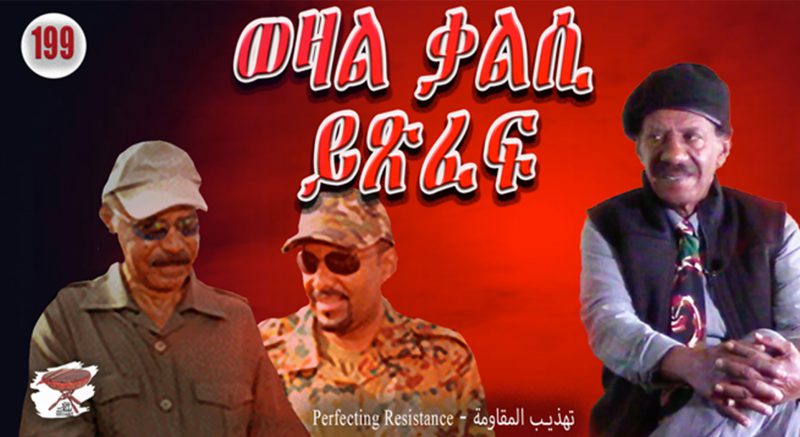 In English and Arabic, opposition (معارضة) and resistance (مقاومة) are different, but in Tigrigna the word for both is (ተቃውሞ). Conceptually the terms are similar in usage though different essence. Generally, opposition describes a political party operating in a system of government based on democratic competition through elections. In Eritrea organizing outside the ruling party is criminalized. Therefore, since there is no democratic means for opposition parties to perform, or even to oppose any forms of oppression, Eritrea can only have resistance forces. And words are important to describe the true nature of any movement. Without that, there wouldn’t be a clear goal that all pursue in unison.

The Eritrean resistance aims towards removing the ruling regime that is leading the country towards the abyss. All concerned parties need to realize one major fact: if the ruling regime is not stopped or constrained, it will have widespread and negative impacts only on the national security of Eritrea, on wellbeing of the entire Horn of Africa region.

Reforming the system from the inside

There are a few who claim their association with the regime, in any form, will lead to a reformed PFDJ: “We all have reservations about the state of human rights and justice in Eritrea, but no one is perfect. We better join hands with the regime and fight for what we believe from within its ranks.”

I’m not saying such individuals do not consider themselves opponents of the regime; I am saying that I do not consider them as opponents. And here, I am speaking to those citizens who made emotional decisions. Rather, I am speaking to those who wrote off the regime out of conviction or even natural emotions and concluded that the PFDJ is irreformable, and its policies are damaging to the nation. Worse, it has no legitimacy to govern.

However, citizens with such unwavering position have more obligations and responsibilities; especially those who are satisfactorily organized and political platforms to take Eritrea out of its deteriorating state and make it a much different and better Eritrea. That’s why: they have a duty to wage a more serious resistance.

I want to emphasize that resistance must be carried out in word and deed. They must constantly show their opposition to the illegitimate rule of the regime of Isaias Afwerki. They are required to explain why it is bad and what they think the alternative is.

The Stages of Resistance

Yes, like all things, resistance has levels. The first step is to expose and defeat in public, the verbal and written messages of the regime of Isaias Afwerki. Defeat its statements whether it’s made by the official spokespersons of the regime or spread secretly and whispered. This is the first stage of the struggle followed by the consolidation and strengthening of resistance organizations. And that is the second stage of the struggle.

Naturally, that would be followed by the task of forcibly or voluntarily retiring the existing ruling regime. Nothing hurts the struggle like a disorganized organization. And that is the third stage of the struggle.

In recent years, when the Eritrean opposition was at its peak: the opposition was on the offensive as it was preparing to bring the regime before the International Criminal Court (ICC) over the arbitrary arrests of citizens, and the violence it unleashed on the people. The regime was going through sleepless nights though the resistance was still in Stage two of the struggle. (I will have more to say about Stage two in following episodes of three-parts.)

For now, however, it is necessary to remind the resistance camp of the need to move quickly and intensively to overcome the hurdles it’s facing. But first, the resistance camp must do an honest assessment of the situation in the first stage that we have long since overcome.

What Weakened the Resistance?

We can give many reasons, some of which are indisputable because everyone knows and believes it. For instance, I can cite the following example during the past few years:

1- The coronavirus pandemic that opened a new chapter and paralyzed all resistance activities.
2- The 2018 changes in Ethiopian politics that resulted in a devastating civil war, destruction, and chaos.
3- The now weakened campaign of groups like the Agazian and Tigray- Tigrinya, that abused Eritrea, its martyrs and history with the goal of destroying Eritreanism.
4. The Sudanese movement that ousted the Al-Bashir regime and the unrest that followed, particularly the chaos in Eastern Sudan.
4. The UAE’s military and financial intervention in the Horn of Africa region, and before that in Yemen that hampered the Eritrean resistance.
5- …and other less critical factors.

The truth is that the above developments have brought the Eritrean resistance back to its initial first stage.

Remember that a resistance in the first stage must convey the right messages, be accurate and honest. It must present a different narrative from that of the official and unofficial spokespersons of the Eritrean ruling party.

Importantly, it’s not enough to remember there are many shortcomings and weaknesses hindering the resistance to move to the second stage, but the shortcomings should also be clarified.

The Narration of The PFDJ

What the ruling has said and repeated over the past two years is as follows:

1- Instead of trying to mediate like a good neighbor in the Ethiopian conflict, it adamantly stated it sees its interference as critical to its existence and it declared it has taken s side with one of the parties of the conflict.
2- It continuously propagated that the TPLF its eternal enemy—which means it will fight until it fatally destroys the TPLF, which means endless war and victims that Eritrea should be subjected to.
3- The Eritrean state-media never admitted that Eritrea is involved in the Ethiopian civil war, and never stated it forces were withdrawn at all.

What is inevitable, however, is that Eritreans will set up tents and mourn their wounded and dead. They will care for their disabled to the best of their ability. And the disabled with live the rest of their lives with their handicap.

Parents of hiding or missing adult children will be punished and punished by the soldiers.

The suffering of guardians and parents who are still being displaced from their homes for not helping the authorities to apprehend their children, or voluntarily bringing their children, will continue.

Arrests and detentions without charge are the characteristics of the regime and there is there is no hopes it will stop.

Some Eritreans who express and speaks out against all the above, are telling the resistance, “I am with you in my heart.” But one who condemns the above and many other acts of the PFDJ’s misrule should join the resistance not only in heart but physically and emotionally because Eritreans expect a lot more from the resistance.

The organized resistance groups must work harder, hard, to expose the acts, policies, and proclamations of the PFDJ and to promote its counter ideas and views in the media and elsewhere.

The Late Osman Saleh Sabe As An Example

Do you know how many years the revolutionary leader, the late Osman Saleh Sabe struggled, and how old he was when he introduced Eritrea to the international media? He started to struggle in his 20s and gained fame in his 30s. Sabe started joined the resistance during the first stage and that helped him to move to the second stage and started to recruit and organize. This is helpful for all Eritreans in their thirties to compare their contribution and determination to the Eritrean resistance–maybe they can aspire to emulate Sabe’s leadership!  let’s go back to the first Stage.

If you want clear evidence that the above is missing in the Eritrean politics, the proof is the phenomenon of Facebook today where Eritreans post fascinating quotes like philosophers on social media and think they did their resistance obligation. This clearly shows that the level of organization and awareness is low and that there is no coherent and effective method to pass on to the media.

Until a few years ago, our friend website Asmarino.com has a radio. Program named ‘Dimtsi Delina’ (We need our Voice). Today we are in dire need to action, the voice of “we need action.”