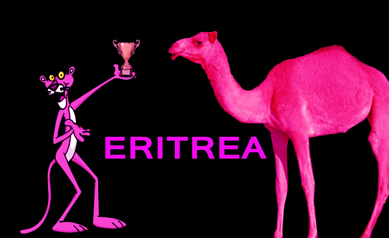 I envy people who grew up watching the Pink Panther cartoon show; there was no television where I grew up. But as an adult, I avenged myself; I watched all Pink Panther shows.

If you find a strange word, run for the dictionary. If you want to check a location of a country, go for the map. Historical reference? The Encyclopedia Britannica. Google and Wikipedia are indispensable quick references. I knew of no reference to help understand the problems of the Eritrean opposition until I realized the explanations (not the solutions) are in the Pink Panther show.

I have complained enough about the Ethiopian handling of the Eritrean opposition portfolio, and at times I must have sounded like Isaias who always blames the usual USA, Europe, and “Weyane” without appropriating any blame to himself. There is always the other story.

The opposition to the PFDJ regime is as old as the PFDJ itself when some Eritreans tried to prevent it from becoming the monster it has become. Not many expected the PFDJ to change and it hasn’t. Instead, its disastrous policies are still damaging the nation.

Over the years, many individuals and groups joined the opposition camp in search of their own particular coins; they were not interested in the coins of others. For instance, a man named Mr. Pinky would join and ask the opposition members to stop what they were doing and help him find his coin only! Selfishness ruled and the meaningless wrangling has been going on unabated.

The reform coin of 2002 is the most recognizable mainly because it tipped the balance against the regime. In the beginning there was the Muslim teachers coin, followed by the coin of the Pentecostals and Jehovah witness. Then there came the coin of the Tewahdo Church Patriarch, the coin of the Sinai suffering, the coin of the penalized parents, the coin of the Mediterranean tragedies… The list of particular coins can go on forever, but let’s stop here.

Before 2002, there was the refugees coin, the land coin, the culture/language coin, the power sharing coin, the multiparty coin, the rule of law coin, and a myriad of other coins.

Very few realized there are so many lost coins and they are still searching for them in unison; others are still obsessed with their own particular coins, single issue opposition elements. And that is the reason for the unfocused struggle of the opposition camp, which is exacerbated by the coin of power struggle, the partisan coin, etc. In addition, the Diaspora has many lost coins: territorial coin, provincial coin, the best dancing party coin, etc. And as long as narrow mindedness is not shunned, the number of lost coins will increase.

At the end, a single person would work to demolish a house so that he can sift through the rubble to find his very own coin. Worse, that house could be Eritrea. Even worse, the cost of the house is much bigger than the coin which might turn out to be made of cheap metal, a fake coin just like the adventure illustrated in  this link.

No struggling organization can survive if it neglects its security. Granted that Eritreans have a bad experience with the notion of security, it doesn’t mean an organization should underestimate the risk of being penetrated by some who would wreak havoc in its structures and discipline. That is exactly what happened in Hawassa. It started with what every veteran of the struggle remembers: the “anbibka aHlif” messages written in small slips that individuals passed to the next like-minded (or potential) person. With all of that fresh in my mind, I warned about the risks of today in my first article “An Office full Of Mice“, after my return from Awassa loaded with disappointments. The destructive activities are still going on; such political jockeying should be taken seriously and justice seekers should be informed about the ailment if they are to contribute to its solution. A few overly ambitions people should not be allowed to cripple the struggle of the Eritrean people.

There are a few annoying political parasites within the opposition camp. People whose main concern is how to control the opposition. They would do the undoable to achieve power through shortcuts.

I do not want to bore you, but it is better to be bored for a few minutes instead of remaining in the dark. This probably concerns Eritreans who live in the USA more than the rest because in the USA, it has reached epidemic proportions and it is demoralizing activists of good will. Therefore, let me walk you through one episode (just one) of the lame ENCDC, the Bayto, the Mejlis, if you will.

Since its formation in Hawassa in 2011, the ENCDC didn’t do anything of significance and it is still marred with internal and external problems that it failed to resolve. A group of ENCDC members who take themselves too seriously have been assuming paternal authority over all opposition activities. Of course, they have no achievement to show apart from the endless conspiracy meetings: Paltak,  public, and teleconferences. Some of the ENCDC members in the USA (and to some extent in Europe) are poised as an absolute territorial authority in a provincial manner. By considering themselves an autonomous leadership of the ENCDC, they practically declared the USA a  Raz Gez region–“self-determination up to cessation” gone awry.

Who has the final say about this?

Apparently, the preparatory committee is independent and it should have the final say. But the Ras Gez group is not taking any of that. They have a direct partisan connection to the chairman of the executive committee of ENCDC. He has overstepped on the council mandated powers of the preparatory committee and wants the Raz Gez group to manage the job of the preparatory committee. Conflict of interest is not suspected; it’s a fact. TekhleYohannes, belongs to the EUDC under the leadership of Yohannes Asmelash, and so do some members of the USA Ras Gez region. The rest, for all intents and purposes, are either members of that EUDC or members of the phony “civil-association” that unfortunately the Ethiopian believe is a mega organization. Here you will find individuals who use so many wildcard hats to ensure control of the USA activities and through that they aspire to control the opposition camp.

The Ras Gez spoilers have been demolishing anything the struggle builds; maybe they should be given nominal Gegnazmatch and Grazmatch titles, which somehow might make them useful, just like Pink Panther found a useful role for the termite in this clip.

Many elements in the opposition are busy positioning themselves for the post-Isaias era without doing anything tangible to bring that era about. It seems like they are telling the dedicated members of the opposition: Suffer, struggle and sacrifice, in the meantime, we will meet, chat, and design on how to be ready to take power (or crumbs of it) once you succeed.

In my last edition of Negarit, “The Smashed Eritrean Wristwatch“,  I listed fifteen groups, many of whom are good for nothing–nothing to show as an achievement, no vision, no experience, no integrity, no popular support, and no cause apart from the quest for power. I can live with entities that exist to guarantee that their rights are not violated in the future, and I do not expect them to bring about any change. Let them be; stay in the shadows where they feel comfortable: I live, therefore I am, sort of thing.

If you are expecting a positive result from the ENCDC, I advise you to lower your expectations to avoid disappointment. Only a little hope is left; if that is consumed, then the hopeful will have to wash their hands. That mule is going nowhere in its circular journey. It was started wrong, it stayed limping wrongly, and now it is on its deathbed. Judging from the last five years, not much is expected. I wish the Ethiopians realize that and save their money and goodwill. The way it is going, the ENCDC is a dead project. No national project can succeed when it is led by political bastards, or by hallow organizations that cannot list fifty people, or by conglomerates of a few persons who, combined,  could not rally two dozen members.

Similar stories to the above has been boring and demoralizing Eritreans enough; let’s move on and see what needs to be done?

First, the entire opposition camp must realize that such political gymnastics must stop. And the only way to stop it is to demand transparency–no more phantom organizations and entities talking on behalf of Eritreans. Every entity that decides to speak on behalf of Eritreans should be scrutinized; the first step is to demand the disclosure of names within that organization. I will go first: Let’s see who-is-who in the USA and Canada. Let’s give all of them a chance to come out and make a disclosure–anyone who claims to be a member or leader of any organization must introduce themselves to the public and disclose their multiple affiliations. It would also be nice if they could provide a summary of their achievements (let’s call that activities) over the last five years. I believe the people should be informed and make a judgment  if an entity is really worthy of leading the struggle; that would save many from living with false hopes.

There is enough information around about most “associations” but it would be nice if every entity defined itself before others define it.

Activists are not zoo ponies that anyone can just mount at will. The opposition camp needs to  lead a mission of transparency to make the so-called organizations and groups that carry flashy names accountable. That includes the political opposition organizations that should make the names of their leaders, public. Eritreans should not be treated like dummies; they should be able to tell who is claiming their leadership. Alphabet soup organizations should be exposed to the bone; fake groups should be stripped naked to be either accepted or shunned. And the slogan of this campaign should be “No Curtains Allowed”.

Only after such a house cleaning task can the Eritrean opposition convene in a successful congress–ENCDC or otherwise. And I declare my position: political activities should be left to political organization, not to amateurs and piggyback travelers. If the opposition camp fails in taking that challenge, the maestro leading the orchestra could be unlike what it appears, just like this Pink Panther clip illustrates.