The Unexamined Life Is Not Worth Living 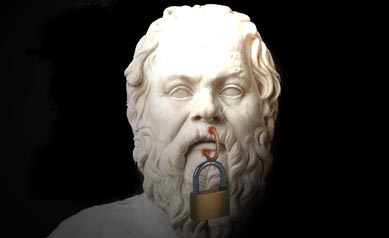 Socrates, one of the great ancient philosophers, was convicted by a jury in Athens for ‘undermining state religion and corrupting the youth.” His crime was his never ending questions that made people think, reflect and challenge old held beliefs and reasoning. That was too much for some and they wanted to silence him. Hence, he was given choices between exile from his city state, commitment to silence with no philosophical discussions or death. He refused going to exile or abandon his pursuit for the truth. He, therefore, preferred death rather than “living an unexamined life” as he put it.

I have often wondered what he meant by “the unexamined life”. It may be better to ask what is the difference between a human being and an animal, for instance a lion. Their natural instincts are similar. Both human and animal eat, drink, breath, sleep and reproduce. They fight or flee. Their difference is, in my opinion, that a human can think and reason while a lion cannot.  One Iranian student described the difference this way: “God, why have you chastised me with such a terrible deformity, as thinking? Why have you taught me to think, instead of teaching me the humility of cattle!”

What is thinking? Thinking is using one’s conscious mind  to evaluate given situations, reason them out, and make rational decisions.  A thinking person  continuously and periodically evaluates his/her current situation, the desired destination and the strategies to reach it. S/he will then build on the successes and learn from the failures to move forward .

The purpose of this post is to encourage all of us to ask where we stand when it comes to thinking. Do we think? Or are we like the animals responding to our instincts only? Or worse, are we singing the same songs, shouting the same slogans or doing the same things again and again expecting different results?

As we embark to commemorate another Independence Day, it would be good to ask ourselves where we are as people at present  and what and where we want to be in the coming years? Our country is  waiting for us, its people.  Hence, let us examine ourselves.

How do we use our time and minds? Do we spend our time educating and developing ourselves and helping others in the process or do we waste our time and energy regurgitating  old grievances  or on online bravados? Do we exercise our minds to ascertain facts on important issues by asking the right questions  (who did or say what, when and why). And what were the role of  hi/story tellers  on the topics they talk about? Or  do we just accept things on face value  and follow blindly  anyone who claims to be “the truth teller”.  Do we reflect at what we say or do not say and their impacts on our lives and the lives of others? Do we keep running away from our own responsibilities  and continue to blame others like the regime at home for everything that goes wrong in our country?

Let us examine ourselves. Why is it that a generation ago Eritreans could capture tanks with Kalashnikov, and give their lives to defend their comrades, compared to the present generation  of whom 10-30 of them could be herded by one Rashaida  tribesman and see their sisters dishonored  and abused in front of their eyes and do nothing? How is it that a generation ago,  Eritreans, in spite of the odds against them, were able to win  against a bigger army supported by the super-powers, while the current generation suffers in silence and looks to others for its own salvation? How is that the generation that fearlessly fought to free Eritrea from the Ethiopian colonization could not raise even their voice let alone their finger against  home grown tyrant who impression, kill and enslave their people? How about the Eritrean intelligentsia, when will you rise up to occasion and help save the nation? As Simon Wiesenthal said, “For evil to flourish, it only requires good men to do nothing.” And as Martin Luther King said, “There comes a time when silence is betrayal.” Are you not suppose to be the consciousness of your people?

What about our political organizations and civil societies? Whose interest  do you stand for,  the people or yourselves? If it is for the people, how come our people continue to suffer wherever they go with neither solution or hope in sight? Do you ever examine yourselves to ascertain where you were when you started and where you are at present? Can I say that we as a people are better or worse off because of your presence?

On conclusion, I would like to remind myself and each of you that the Eritrean Independence came about as the result of a long and hard struggle and huge sacrifice. More than 60,000 young women and men paid with their lives and thousands more with youth, sweat, blood and body parts. Unfortunately, the Eritrea that we have is not the one they envisioned, a country where its people live in peace, democracy, justice and progress. Hence, as we commemorate with pride the achievements of our yester heroes and heroines for getting rid of foreign tyranny, let us also ponder with humility for our failure to live up to their legacy and for allowing homegrown tyranny to flourish. Fortunately, it is not yet late to amend our ways and to work together to free ourselves from the monster we created and sustained. Let us stop pointing fingers at others and instead examine ourselves. As Socrates said , “Unexamined life is not worth living” for which Martin Luther King  added“ Our lives begin to end the day we become silent about things that matter.”  I wish you all a thinking Independence Day.