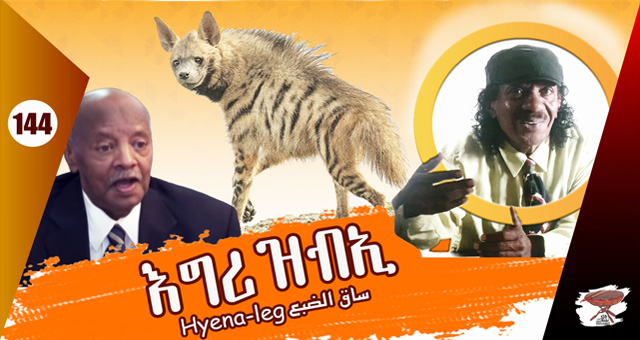 When I was a child, there was a man who had a big funnel-shaped wooden leg. His steps made a bang every time he stepped. The children would say, Ennguuuy, and he will chase them. His nick was Egri Zb’ee and children never let him live in peace.

Years ago, a thief broke through the barbed wire and reed fences of the Danadai plantation at Ela Ber’ed and steal fruits. The workers thought it must be animals like monkeys sneaking in and eating the fruits from the far side of the plantation. They set a trap, the tough trap and left. Just after sundown, the thief sneaked in again and started to steal fruits. Suddenly he stepped on the trap, and he fainted. When he regained consciousness, his leg was badly hurt, and he had lost much blood. He was in so much pain, and the trap was difficult to unlock. He stayed for the night immobile and in pain. When morning broke, he heard workers approaching. He wanted someone to save him from the trap, but he didn’t want to be caught wither. But reflex won and he wanted them to stay away. Enguuuy, enguuuy. It didn’t sound like a Hyena, and the workers came closer and found him swimming in blood. They took him to the clinic and his leg had to be amputated. That was poor Egri Z’bee, the Hyena-leg

An Interview with the PFDJ Clerk Alamin Mohammed Saeed

The Egri Zb’ee story I told you is an illustration of what is wrong with the discourse and the political culture of the Horn of Africa region. And in preparing today’s Negarit 144 I listened to the clerk’s interview, Alamin Mohammed Saeed’s where the interviewer seemed prepared to listen to the same PFDJ propaganda for the umpteenth time.

It has been three years since I talked about the clerk, and since then he was not around, or maybe I didn’t take notice. The 60th Jubilee of the start of the Eritrean armed struggle brought him back. At any rate, let me tell you an anecdote.

Once there was a bandit whose people persuaded him to farm and sustain himself instead of remaining an outlaw. They gave him a plot of land to farm, and he was doing fine until one day, he saw a man coming towards him through the rough roads. He asked him, ‘why don’t you walk on the proper road instead of wilderness? The man told him he was avoiding the road for fear of bandits since he carried a bag of money and didn’t want to risk it. The bandit-turned-farmer was enticed. He said, ‘your types will not leave us live an honorable life!’ Then he hit the man, took the bag of money that he carried and returned to his old outlaw life.

The PFDJ would not let Eritreans live a normal life by their provocations and suppression. The clerk Alamin Mohammed Said provoked me enough and I had to say something about his interview.

PFDJ’s Narration Has Turned into A Myth

Just like the Abyssinian clergy, the PFDJ has its own feel-good stories, and I will try to break it apart using the common Eritrean narration; not the one-sided PFDJ myth. But first a warning is due: too much Alamin is not good for your health, the doctor advised.

Kagnew Station and The Elevation of Eritrean

Alamin repeated the usual illusion that the PFDJ’s Eritrea is important the whole world is arrayed against its existence; the USA is on top and according to his narration, it built the Kagnew station in Asmara out of spite, to subjugate the nation.  The elevations of the highest six capital cities, in meters, are as follows:

After WW2, space communication was at its infancy and intelligence agencies didn’t have today’s digital technologies and satellites in space. The technology was analog, and receivers were antennas and later microwave dishes. Therefore, before the digital age, elevation was very critical for an efficient communication and broadcast and America found Eritrea attractive due to its ideal elevation and established the Kagnew Station communication base in Asmara.

There was also another quality Asmara surpassed other places. The latitude of Asmara is 38° E, while Moscow is 37° E. The general direction of Moscow is due north (1 arc degree is about 111 kilometers). Elevation and space proximity to Moscow was the significance of the Kagnew station. In the seventies however, with the coming of the digital age when placing satellite in space became common, ground elevation became insignificant. And in the mid-1970s, the USA dismantled the Kagnew station due to that; security reasons was not a major cause of the decision. But Alamin thinks otherwise.

Oil iss the king of energy, it’s but with every passing day, however, the use of renewable energy like solar, wind, and hydropower energy generation is increasing dramatically and thus the importance of oils is decreasing. And since Eritrea is on the Red Sea, it had an advantage because huge amounts of oil and natural gas was shipped over adjacent sea lanes. But the beneficiaries need nothing from Eritrea except to prevent it from possibly disrupting the sealine supply. That also explains why the West was so much interested in Eritrea.

In the early 2000, the late Ambassador Girma Asmerom boasted that Eritrea’s mountains are full of minerals—the usual boasting by the PFDJ about the hidden wealth. We asked then, “what good is a mineral that stays buried underground forever if it cannot be extracted and exploited for the benefit the people? That requires another story.

The Ethiopian Ambassador to Kuwait.

During the Badme war of 1998-2000, the Ethiopian ambassador to Kuwait frequently met the Kuwait foreign ministry officials to pass an appeal from his government to advise the Eritrean government to stop the escalation of the war. The Ambassador repeatedly told the Kuwaiti deputy minister, ‘we have an air force, we have tanks, we have this and that…we are not afraid of the war, but it will destroy Eritrea. Please convince them to stop.’ The deputy was tired of the boasting, and he told him, “Mr. Ambassador, what is the use of all your armaments and forces if you cannot use it? If you are in a war, you go ahead use it if you think that is the solution…”

Of course, the same remark applies to Alamin: why did Eritreans liberate their land if they were not going to enjoy freedom?

Unfortunately, Alamin and his boss are the samples of the PFDJ mentality…he is a clerk with a one-page governing manual carried over from the struggle era.

“A Mute person sings only one song” An Eritrean proverb

Alamin never mentioned any friends but so many enemies—he might think Ethiopia’s Abiy Ahmed is enough for a friend. Fqr eske meqabir, as the Amhara say, ‘Love up to the grave.’ Everyone is the PFDJ’s enemy: the USA, England, Tigray, Italy, Tigray, the West, again Tigray, and Tigray once more, Portuguese, missionaries carrying the bible!

I wish someday the PFDJ leaders would remember they are not infallible angels but mortals like the rest of humanity. They are everywhere pointing fingers at half the world that they consider enemies! I wish for once they practiced introspection and found out what is wrong with them. If they did that honestly, they would know they are the biggest problem and that will benefit them and the rest of Eritreans who were supposed to benefit from everything they claim to have achieved and will achieve in the future. But how can they when the PFDJ doesn’t even know the population of Eritrea? Alamin says, we might be 2, 3, 4, or 5 million. Take your pick.

Since he cannot differentiate between 2 and 5 million people, Alamin the clerk is not fit to be a shepherd of ten goats not an entire country!
“If you don’t know where you are going, any road will get you there” Lewis Carroll

Our hope is great for a prosperous Eritrea, a stable life for Eritreans, and conscious Eritreans will not stop fighting until they achieve that goal. However, where are Eritreans heading? Do they have the same destination, or everyone is riding on a different train? Are they all genuine riders? If anyone doesn’t have the good of Eritreans at heart, according to universally accepted norms, people shouldn’t choose rides randomly, or ride for an excuse. A journey to end the era of tyranny should be the priority. The liberation of Eritrea was achieved with that spirit. What followed has divided Eritreans when it shouldn’t have. What is needed is waging a truthful, honest struggle, not sectarian, fascistic, not a struggle for anti-human and primitive visions. Those who are sowing hate and division among the people and hindering the just struggle must be identified. The field must be cleared to wage a confident, clear, and truthful struggle with the aim of safeguarding human dignity, freedom, and justice. If Eritreans unite on these goals, they will arrive at the targeted destination. Conscious people must know where they are going. They must not be blinded by those who want to lead the struggle to a different, trivial destination, a destination of disarray, disunity, and self-loathing.