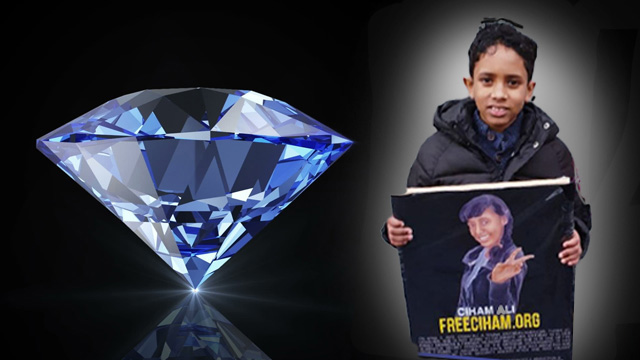 [Translated from Arabic by awatestaff]
How I wished that my son Ahmed would not wake up with the awareness that in his ancestral homeland there is a butcher named Isaias Afwerki Abraham among the Eritrean people… I hoped was that would be imprinted in the depths of memory, when he is in a far place, that Eritrea is a homeland whose people love Freedom and adores peace. Curriculums strive to build perceptions and schools in this far place have a different task beginning with the grade school—to make the children universal ambassadors, while others teach them about the rights of children. And here begins the commitment to remain independent as an individual. Here the child begins to interrogate you with a barrage of questions leaving no angle barred–especially “the all-knowing sheikh Google”, may God guide it, reveals our situation whenever we yell at our son Ahmed!

At any rate, I will shorten the long journey of a dilemma. One time came to me after he gained his share of knowledge about Malala Yousefzi, the Pashtun girl, as if he had just returned from the Swat Valley and Khayber, Pakistan. He did a lot of research to find out the reasons for depriving that girl of her freedom of education. The thing is that his teacher had given him a heavy inciting and mobilizing dose. Suddenly our young man started to interrogate us about Eritrea–whether there were digging for similar tales of the “heroine of his “humanitarian” revolution, the daughter of Zia El-Din Yousefzi!

I tried to zigzag my way out but then I remembered “all knowing Sheikh Google” and tried to soften our version of suppression of freedoms. But, BOOM, from the get-go, he raised the Eritrean militarism called “Sawa Academy”, the vocational and technical training, and the graduation of a professional football player, and…!

By God! The moment he heard about the graduation of a football player; my son Ahmed started asking about the spelling of Sawa and left to consult Sheikh Google!!

From there on, Ahmed dived into the matter; what football player and what championship? He came with a ton of embarrassments—from the news of the desertion of national the football players, the sufferings of the youth and elderly in Sinai, and mass death of Eritreans on the shores of Libya, and the drowning of refugees in Lampedusa, Italy, and he started to dive deeper into the sea of the involuntary disappearance of Eritrean children and mass escapes, human trafficking…..

Google should not expose children with such information knowing their curiosity when they appear as adults—forget human rights and politics. Google should not be extra courteous and respond to all age groups!

But Afwerki deserves it; the number of Ahmed’s sample group is ‘sixty thousand squared’. They are standing at the doors of his embassies asking about their sister “Ciham Ali”, her brothers, her mothers, her teachers, her leaders, and our elders… before worrying about the sovereign that makes its citizens disappear within its borders, beyond where the rays of the sun can reach.

An innocent child, other innocent children, … and all the rest of the innocent citizens. There is no fear for our sovereignty. The Eritrean Eve is fertile; she has given birth and pregnant with revolutionaries who can start it all over again. What would be the difference! It has been thirty years and it has been all killing, escaping, arrests, and wars on all directions. Death in the thousands and military enslavement and psychological terror, Killing the trust between people and doubts walking on legs, suspicions some hidden and some in the open, inter religious friction, one clan against the other, a tribe against a tribe, a region against a region, regression after regression, nationalities, regions, nepotism, lowlands, and highlands terrain… What Isaias did is visible!!

Does it mean the Tigrayans appeared in history with the coming of Abiy Ahmed or at the end of the era of Isaias Afwerki, the Eritrean Eve has stopped giving birth?

Where are the people disassemblers and assemblers? The Amhara had disassembled it and we assembled it again. What is the problem if the Tigrayans can try—does it mean all the bolts and nuts are no more? Or the antique Mark10 rifle is not decisive anymore?

By God, Mt. Adal is still standing and the Sawa valley has fire under its sand. Patience has limits. Death inside Eritrea is still happening and it’s limitless outside it.