Posted on September 11, 2021 by Awate Team in Gedab News 3 Comments 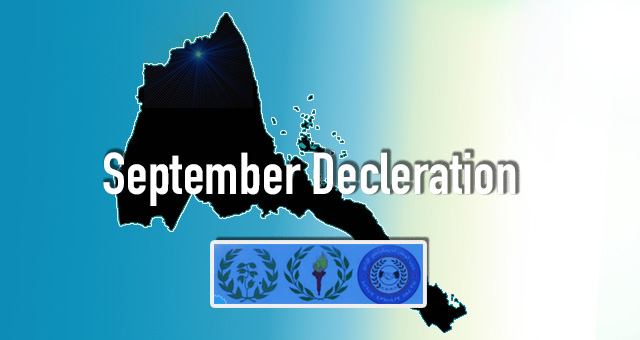 After a long discussion between the Eritrean opposition organizations, three entities announced the formation of Eritrean National Coalition (ENC).

On Friday September 10, 2021, the announcement named “September Declaration” was formally made public in a Zoom conference where hundreds of Eritreans from all over the world attended.

The three entities are also founding members of a broader organizational umbrella which includes over a dozen other entities.

The ENC encouraged all Eritrean organizations to follow suit to be able to face the challenges facing the opposition and the Eritrean people.

The surroundings of Eritrea have been going through difficult times since 1998. Following the coming of Abiy Ahmed to power in Ethiopia, serious political rifts has spread in the region and has led to serious civil strife and gross human right violations including genocide, rape and damage of properties.

Ethiopia has been in a civil war since November 2020, and as a result, tens of thousands have sought refuge in neighboring Sudan which has several unresolved political issues with Ethiopia. The Eritrean situation has worsened after the Eritrean ruling party sent its army to fight alongside the forces of Abi Ahmed in his battles against the Ethiopian region of Tigrai.

Many Eritreans have lost their lives though the Eritrean ruling party has not announced the names or the numbers of the casualties.

Such developments have pushed the Eritrean opposition parties to seek closer collaboration among each other to face the situation and be prepared for disastrous eventualities.

Leaders of other entities within the ENCDC and notable opposition Eritreans participated in the Zoom meeting of Friday.

The September Declaration has spread an air of hope among Eritreans who are discussing the event diligently in private as well as in social media platforms.