Grassroots View: The Discourse of Martyrdom and Sovereignty

Posted on July 7, 2016 by Chefena Hailemariam in Articles 6 Comments 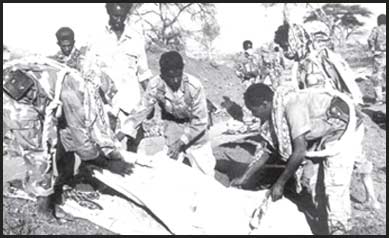 Introductory note: This article is based on my contribution to a panel discussion on the 14th of May 2016 organized to mark the Eritrean Martyrs Memorial Day.  By way of introduction let me share with you the following brief anecdote. On reading the email posting announcing the event, a friend of mine suggested that I was not really the right person to present the topic. In his words, ‘There are people who are better placed to speak on the subject’. I agreed that there are many people who can narrate the extraordinary valour demonstrated by Eritreans over the thirty long years of the history of armed struggle. I also told him, as the topic indicates, that I was going to talk only on the idea of martyrdom in the Eritrean society.  With all the respect I have always paid to this friend of mine, I had to frankly say I don’t need the kind of ghedli experience some people believe is a requirement to speak about the topic.

However well-intentioned this remark from my friend, who is an ex-EPLF veteran, and who had physically been in the ‘action’, his view represents only one particular discourse. It might indicate a basic assumption concerning who is entitled to speak on the topic i.e. ‘who qualifies to talk about Eritrean martyrs?’  I will return to this point towards the end of this article.

When I accepted the invitation to contribute to the discussion focusing on martyrdom, what immediately came to my mind was whether one can deal with the topic without contextualizing it within the question of how an individual’s relations to the nation are defined and are played out. So I will focus on a grassroots view of martyrdom, I will mainly deal with how martyrdom and the related notion of sovereignty and nationalism are spoken about, interpreted, (mis)understood, or silenced.  In other words, it is an attempt at understanding the discourse: the meaning, the views, attitudes and values groups attach to ideas of martyrdom, nationalism and sovereignty.

Discourse on martyrdom could be the function of a top-down process led by political elite; or popularly held views free from imposition.  Some people argue that the present view of martyrdom developed as a direct result of the party-state efforts of social control to scare and subdue the populace by invoking the martyrs’ names.  It is hard to accept this argument in its entirety but it may partly explain some of the ways the party-state has been successful in hoodwinking the population by turning them into cultural dupes. In my Part II I will elaborate on this argument based on factual examples that will help demonstrate the grassroots view of martyrdom in contrast to the official one.

The above mentioned event had also served as an occasion to engage on a debate/discussion on these interrelated issues. The event didn’t only offer the justice seeking participants the opportunity to pay respect to Eritrean martyrs but also allowed them to reflect and critically analyse how the idea of martyrdom is represented and understood by different segments of the society, as well as how they use such national icons and for what purpose. In my Part II, I will briefly incorporate the contribution of the other panellists along with the views from another similar gathering I lead in my local community.

The Idea of Sovereignty

The Colonial experience was the foundation for the very idea of the Eritrean nation. A common territory and a distinct Italian colonial history was the basis for a future oriented nationalism.  The wishes of the communities that constituted the society to remain within one geographic entity set a tone for Eritrean nationalism and its claim to secular nationhood.   Thus, the idea of sovereignty emerged with the first generation of post-colonial elites of the 1940’s.  These political elites of that era had imagined an Eritrean nation, a secular community and plural project based on common citizenship and popular sovereignty (Makki, 2012).

In the politically turbulent times of the 1940’s, despite the divergent, and at times discordant orientation, the political discourse expressed firm opposition to the Benin-Sforza project that recommended the partition of Eritrea. Although they differed on key issues the idea of the Eritrean nation was a growing plural project against external subjugation.

The nascent public space created by the British Administration and the affordances of printed media helped develop a sense of political community. This is supported by the highly quoted Benedict Anderson’s concept of ‘imagined communities” (Anderson 1991). We find Anderson’s conceptualization that views the nation as a psychological reality in the mind of its citizens quite useful to understand the development of Eritrean national consciousness. According to this perspective, citizens feel they belong to a single national community without having to physically meet with each other. The politico-geographic entity is matched with the Eritrean national identity. But this sense of political community has to pass through a rigorous test.

The latest of these tests, albeit not so serious as to threaten the survival of the nationalist ideals, happened somewhere in 1989. It was the Derg’s vicious design to exploit the Eritrean societal fault-lines, a desperate attempt to grant an ‘autonomy’ for Lowland Eritrea.  And it was in reaction to such an evil aim that Kegnazmach Sunabara Mahmud Dammana had to make a historic call to reject this plan. Making historical allusion to the Benin-Sforza evil design, he warns Eritreans against the danger.  In his highly exhortative and powerful poetic language he says, “we Eritreans are united like the milk from a single cow and the harvest from one plot of land; and so no force shall be capable to divide us”. This points to the significance of the popular sense of identity which is organically linked to the idea of sovereignty and territorial integrity.

The party-state’s idea of sovereignty is based on overemphasis on geography over the human element of welfare of the populace who live within the borders.  As opposed to the popular idea of sovereignty the party-state’s version of sovereignty has been characterized by its belligerent nature, particularly since the political crisis in 2001.  The border conflict could not be resolved because both warring sides seem to believe the current impasses are in their best interests. However, if the stalemate has been mutually harming to the elites of both states, there might have come a mutually acceptable deal; and until they arrive at such a point, no resolution appears to be on the horizon.

Ethiopia refused to implement seeking further consultations while Eritrea refused to talk before implementation.  But, it is very natural that the shock of such a prolonged stalemate is felt by a smaller economy although, in the conventional sense, there isn’t any Eritrean economy to speak of.

It is becoming clearer by the day that the 18 years long Badme saga has now developed into an ideology created by the system to hide some historical facts.  It is a refuge for the party-state to hide behind. Sovereignty has turned into a pretext for an authoritarian grip on power. It has also de-historicised the crisis so that Eritreans may focus only on the present, rendering them ignorant of the genesis of the border war.

Other than regurgitating the same language on the ruling, the Eritrean party-state hides the fact that there are historically uncontested Eritrean lands that the Border Commission awarded to Ethiopia. The party-state has already shown its readiness to use them as a bargaining chip. They have to be surrendered to salve the tyrants pride and as a justification for the ill-conceived start of the border war. Apparently some of these are fertile arable lands and their hamlets belong to a community that the EPLF would fall back on during its difficult times.

What is more, this powerful narrative of sovereignty was an excuse for stifling democratic public space and it securitizing all matters of public interest posing existential threat.  It created ‘traitors’ and ‘defeatists’ where they don’t exist. Even the high-ranking EPLF leaders who led a successful war of if liberation with such an extraordinary heroism were not spared and from being accused of treason. How ironic!

In reality it was the EPLF/PFDJ that has been engaged in violating sovereignty of neighbouring nations by conducting kidnaping and assassinations; guided by its aggressive stance, it brutally dealt with individuals allegedly considered a threats to its power. To that end, conducted cross-border operation inside sovereign countries. And in far-away counties its covert foreign mission has always involved spying, intimidating, blackmailing, and extorting.

The EPLF has skilfully constructed a powerful narrative of martyrdom to revolve around its own glory and that of its helmsman, DIA.  It created myths associated with its own success in leading the sacrifices made by all Eritrean martyrs. But myths such the epics (ቕያ), icons, heroes, heroines, national symbols, such as the flag are important to forge nationalism.  After all, nationalism is, in some sense, a discourse project that helps promote oneness or unity in diversity.

The discourses of unity as such may be a useful means to bind a society as diverse socio-culturally as Eritrea if they are produced at the right time. Also the historical contexts in which they are produced and the way they are interpreted matter a lot. For instance, in the Eritrean history of armed struggle we have witnessed the power of some texts (oral or written) and the extents to which they have had far-reaching consequences is shaping inter-community relations; but one needs to heed to some of the factors mentioned before in order not to succumb to the pitfalls of subjective interpretation.

There is nothing inherently wrong with the ሓደ ሊቢ፡ ሓደ ህዝቢ (one heart one people) mantra as long as it helps to shape society’s sense of identity positively and promotes the people’s sense of belonging.  The reason we look at it with some scepticism is this that kind of nationalist narrative is blamed for creating false consciousness and masking inequality within the broader society.

The EPLF’s success in leading Eritrea allowed the current party-state to legitimize its ‘nation-building’ project.  The Party-State in Eritrean has since engaged itself in excessively nationalistic discourse i.e. the unity derived from the ghedli or struggle era. Its hegemonic nationalist narrative aims at a monopoly of all matters of nation-building including national symbols. It took possession of national symbols claiming it is the only custodian of Eritrean nationalism and was the repository of the martyrs’ legacy.  This has not been without triggering some negative reaction, particularly most recently.

On the question of how groups express their national allegiance, It appears that, this top-down ‘nation-building’ approach is being met with resistance as Eritreans in exile make meaning of and respond to the nation-building processes in the manner they think is right. They are saying ‘we are Eritrean through and through but also we are performing our other social and political identities’. Indeed, they are asserting their traditional social and political identities without compromising their national identity.

The PFDJ have always been obsessed with claiming a privilege to determine ‘who is sufficiently Eritrean’.  In what transpired in the last month, this claim became self-defeating.   No need to scrutinize, just a glimpse at the picture of the June 21 demonstration says it all; who got an Ethiopian imperial flag flying high in a supposedly Eritrean gathering? Can there any better proof of an act of treason and a betrayal of the martyrs’ legacy?