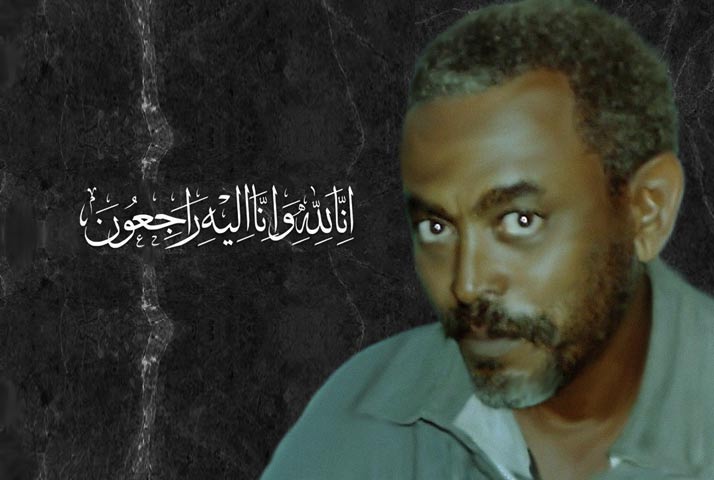 If you think the title is blasphemous, not too fast. It is not, and I am hoping you would think beyond our habitual reaction to killing, our mechanical reaction of always dropping the responsibility of all murders and killings (not death) on God. I believe it is wrong.

Today I will grieve in my own way—I am not following any traditional mold of grieving. And this will be a eulogy in honor of my brother Abdulrahim, delivered in his name. I am in grief, and it is one of my rare angry moments, over the situation of our country. I have no doubt Abdulrahim would have understood my reaction.

Everybody knows that humans are born, live, and finally die. If someone gets sick and then dies, it is natural death, we are saddened by their departure, but we accept it as a natural death, and life goes on. If people are run over by a car, it’s a reckless or drunk driver that killed them. If someone dies for lack of proper health care, the inept regime that runs the country killed them. If someone commits suicide, we do not say “God killed him”, but we confidently say ‘he killed himself.’ I will no longer condone the tradition of automatically passing the responsibility of death to God, He is not a killer.

The fact that all creations die is not a debatable matter, the cause of death is. In Eritrea, we have been desensitized and conditioned so much that we stopped questioning the cause (or root cause) of the death of our loved ones. There is no accountability for the people who are dropping dead at an accelerated rate. And all the responsibility for those dying because of simple and minor illnesses, those who are dying of excessive anxiety and depression, they are dying slowly due to the injustice and suffering inflicted on them by the regime—the PFDJ’s hands are soaked in blood.

Did God kill our youth who perish in their thousands in the wilderness of the Sahara, or drawn in the Mediterranean Sea? What is the reason of sadness and agonies that is eating our people from the inside? What is the dark spots on the faces of many women who are suffering silently? Why do young people in their thirties look haggard and sick? Why do we see less smiles and more sadness on the faces that should be beaming with optimism? They are being killed by the PFDJ. It’s responsible for their agonies, and the many unexplained deaths. Being religious and believing in the power of the Almighty doesn’t mean one should absolve the PFDJ of all the crimes.

The above is my reaction to the death of my cousin, my elder brother, Abdulrahim who died mysteriously on Thursday at Keren.

The holy books tell us the story of Moses—his journey from Pharaonic Egypt to the land of Canaan. We are told that his people refused to follow him, instead they mocked him: you and your God can go and fight, we are staying put, here. When the Jews left Egypt, they wandered in the desert wilderness for forty years before they settled down.

Similarly, many Eritreans have lived in the desert camps of Sudan for decades, others are suffering in desolate camps in Afar region, still others are living in crammed camps in Northern Ethiopia. Ironically, many are interned behind barbed wires in the Negev desert, probably at a spot that Moses passed through. In addition, many of us are living in agony all over the world, refusing to forget the agonies and predicament of our people.

We have lived in pain for forty years; the monstrous regime has been ruling Eritrea with impunity for 26 years, and our people have been suffering from untold oppression—endless servitude, killing, jailing, beating, and humiliation under the despicable PFDJ regime.

We are humans, and we react in the most human way. Yesterday I heard my brother Abdulrahim passed away in Keren. Only last week I was talking to a friend after I learned that Yaseen AbSelab, the carefree funnyman from Keren, has died in Abu Dhabi. AbSelab was a peer and a friend of Abdulrahim, and I laughed reminiscing an incident where Abdulrahim quarreled with AbSelab over something naughty I did as a young boy—AbSelab defending me and Abdulrahim disapproving of what I did. I met AbSelab for the last time in Abu Dhabi in the nineties and I was sad when I learned about his death last week. I had no idea Abdulrahim would follow soon.

My father died 14 years ago; we had pressured him to return home and retire in peace and he was adjusting slowly. Then, one day I asked him how he was doing, he told me “apart from the pestering of your friend in the streets, I am doing fine.” He repeatedly complained about a certain colonel, my childhood friend, who repeatedly pestered him in public, “ennehe, abo ‘ti Weyane. Ennehele”—I was supposed to be the Weyane! That didn’t matter to me, but the humiliation of my father really made me angry.

Soon my father became sick and was admitted to (rather, told to sleep in) the hospital–he took along his own mattress, pillow, blankets and whatever he needed from his home, the hospital provided nothing but a stinking bed.  After a few days, he died in that hospital, they diagnosed his ailment after he was dead!

But it was different with Abdulrahim. He has been fine until he felt sick and wanted to check with a doctor; he walked to the hospital on his own, and in a few hours, he died there! It is fishy, and I have reasons to believe they killed him. They murdered him.

Abdulrahim was one of the last relatives left behind in Keren—now a part of me has died with him. I am sure many Eritreans reading this will relate to my situation since they have their own versions of pain. Death is not an easy affair, though the PFDJ have made it seem so; they have cheapened life so its value is much diminished. People who sacrificed their lives for the country are living in refugee camps, in many host countries, in exile, not able to forget their country—how could they? The PFDJ doesn’t even allow the remains of many veterans of the Eritrean struggle to be buried in the country that it rules like a fiefdom. The PFDJ wouldn’t allow any of its opposition, or other dissenters, to be buried in Eritrea. Many Diaspora Eritreans cannot attend the funeral of our relatives and friends, we can’t see our loved ones in their death bed as they exhale their final breath. And we live in pain.

Abdulrahim, my brother, is gone. I console myself believing that, at least he is freed from the servitude and the bondage of the PFDJ that forced him to carry a gun and roam the streets at night—a forced guarding task imposed on his age group. He lived a tough life, the PFDJ wasted his life, exploited his labor and never left him alone to live a normal life. But who in Eritrea is living a normal life, haven’t they transformed Eritrea into hell on earth?

For many years, the rascals ordered him around and he couldn’t help it since he had a family to look after. In Keren, like many other places, street boys are ordering proud citizens around. Street boys are keeping our elders in jail. Street boys are pushing the youth to perish in the wilderness of the deserts and drown in the seas, all in search of freedom. And if we do not take matters more seriously, the PFDJ is like a swarm of locusts that wouldn’t stop until the land becomes barren.

May Allah receive my dear brother in heaven.