The Art of Dialogue in Tigrinya Language

Posted on January 6, 2017 by Abdalla Yousuf in Articles 32 Comments 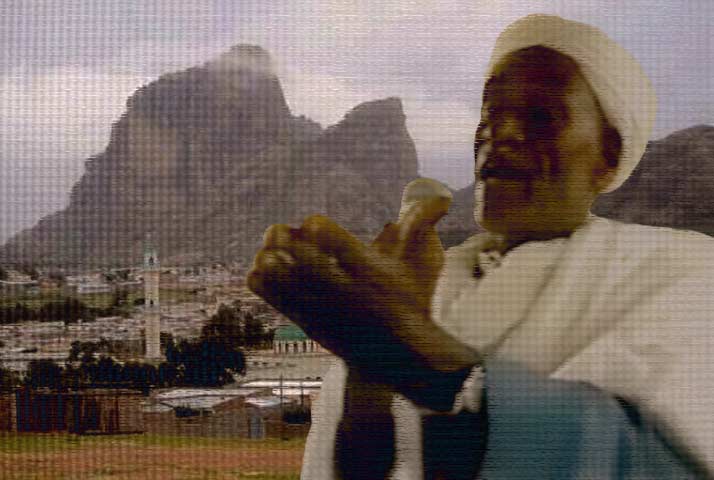 For the benefit of those who may not know where Senafe is, here is an important synopsis relevant to this article. According to Wikipedia, Senafe is a “market town in southern Eritrea, on the edge of the Eritrean Highlands. The surrounding area is inhabited by the Saho people and the Tigrinya people”. In other words, Senafe is a stone’s throw from the Northern Ethiopia, the State of Tigray that borders Eritrea. It obviates it then for Senafe to be one of the towns impacted by the 1998-2000 war between Eritrea & Ethiopia. It obviates it also for there to be a unique hint in Aboy Siraj’s beautiful Tigrinya: that strong yet distinct accent any border dweller tends to have between Tigray and Eritrea. If you understand Tigrinya though, please listen to it, I guarantee you, you are bound to hear it more than once, simply put, it is that good. There is a great deal that one can unpack in this speech. Nonetheless, for those who do not understand Tigrinya, the language in which the video clip being shared, herein follows, a synopsis of sorts.

So, Nsu (Isaias) & several of his cohorts tout this meeting as an open discussion with the president. Aboy Siraj is given free reign it seems as the video clipping spans almost nine-minutes. Aboy Siraj warms up the audience, the leaders, and all in attendance by thanking them for gathering together to discuss their issues (video above).

The way he frames the Senafe peoples’ dire needs vis-a-vis the aging roads replete of potholes is illustrative of the skill Aboy Siraj capably dispenses. Instead of asking bluntly for the need of the road rehabilitation project as any citizen of a country would demand in a normal country; as the transportation industries effectively have stopped servicing the public need for transportation due to wear and tear on their tires making it not worth to service the lines in question; here is how skillfully he does this – paraphrasing here: When we hear our leaders are coming we worry about the potholes that might cause you to trip and fall. We worry about your safety.

When he wanted to illustrate how the same roads had its golden era during the previous rulers, he doesn’t simply whine and complain of how the roads have deteriorated over the years nor does he make any mention of the former dictators associating them to any positive light. He knows all too well that these are not normal times nor normal leaders that he is dealing with. So, he saves the invoking of former rulers only for derogatory purposes for when he was ready to attack the former dictators on different issues. How many times have we heard, by the way, Eritreans in the opposition touting that Derg and Haile Selassie were benevolent in comparison to our own. Aboy Siraj never goes there – No need for that and it is too risky besides. At any rate, back to the narrative: he tells a story of how two travelers one who knew the road so well and one who didn’t know where the line that separated Eritrea from Ethiopia were; naturally, the traveler asks his companion where the former ended and the latter began as they headed to Ethiopia; the experienced traveler’s response: just pay attention to the roads, what the roads would tell you appears to be the answer. And, sure enough the minute the border line was traversed the bus begins to hump and bump with so many potholes, that was an indication that the smoother roads belonged to Eritrea’s side and that was where the border between the two countries hence begin to diverge. This is how one skillfully conveys prudent message without antagonizing those who wield unwieldy power over individual citizens.

Through it all Nsu is happily laughing and clapping while the wise man, Aboy Siraj was insulting the regime’s incompetency and ineptitude. The ending was exceptionally astute in that Aboy Siraj self-deprecatingly telling the leaders that uneducated person is bound to make a mistake and is bound to make blunders, as such, he urges the leaders to forgive him if he made some slippages – Talk about ze’akhlen Tihinen bEAle Mariam ybla. This is, after all, a man who outlived three regimes in his life, if not more. He knows he could be imprisoned for his remarks if it was viewed as insulting of the leaders, which it was. But, he took a chance, through humor, through pleading, and through self-deprecation, and through plethora of proverbs, he was able to outwit the regime.

Interestingly, in those nine minutes Aboy Siraj uses, by my count, about 15 proverbs. What makes unique about his use of proverbs is that he appropriates, expounds, and re-articulates to make a larger point with most of the proverbs that he shares with the audience. He doesn’t simply let the proverbs do the explaining; he doesn’t simply spill these proverbs; he makes them part of the narrative with impeccable talent at oratory; he simply disarms his audience as applause lines can be heard over and over throughout those nine minutes of speech. Counting those applauses, the way the proverbs were counted here could give the reader an idea how well Aboy Siraj’s speech was received. But, deferring that to those who will be watching the video clip before reading this piece to do the counting and report back to the Awate discussion forum, would be fair. Wouldn’t you say?

If the reader wishes to further learn about the “anatomy of a proverb” in Tigrinya language, invoking an excellent article written by Burhan Ali by the same title is appropriate. Proverbs in Tigrinya are alive and well. In fact, Aboy Siraj, who, by the way, passed away just late last month, may he rest in peace, interweaves it so seamlessly – in the ironically touted “Open Discussions with the President” that leaves its audience like me astounded at the man’s ability to make a case in public arena. Seldom can one get away under this regime, a regime so brutally repressive that leaves its citizens paralyzed of fear and wouldn’t even dare to think ill-thoughts of the regime because they somehow could be imprisoned for their un-uttered thoughts. Case and point: One of the United Nation’s CoIE witness account, in fact, said something to the effect – he was afraid, so afraid that he thought his thoughts could get him in trouble with the regime. Or, who could forget of the bright young Eritrean University law student who asked Nsu (Isaias) some tough questions, and from the way the response went, it was obvious the young man was going to be in trouble.

Sure enough, the young man, we all learned that after the event, was either made to disappear or died in a car accident – of course, under suspicious circumstances. What is the point of all this? For one, this nine-minute video clip made its mark on so many levels, suffice it to mention three:

(1). The fact that a stranger in a nine-minute video clip can make an impression on the art of making a case for one’s cause than in some cases those who have spent a lifetime opposing the regime is just remarkable feat. For example, Aboy Siraj’s powerful moment comes when he mentions about UN resolution and Wayne’s mistaken notion of keeping matters in limbo just because it can. Aboy Siraj’s clear eyed response: Well, there’s no such thing as a second resolution, he uses a Tigrinya proverb to make his point of not wasting our time and that the verdict was sealed, done and over with. Aboy Siraj adds this powerful and emotionally heart wrenching rendition: How our heroes of yesterday and the youth of today at the frontlines even the unborn heroes in their mothers’ wombs will be ready to give their life for their country – There is no shadow of a doubt there. Eritreans care more about their country than they do about their tummies, he added. His repeated message to the powers that be who were listening is always to consult with the stakeholders (shura). The final rub: he reminds everyone that farmers don’t resort to hand-outs. Eritrean farmers find a way to survive.

(2). There is, definitely, a lesson, an important one at that, which can be gleaned from this clip: Making a case for one’s cause is an art, be it in the political discourse or societal conversations. We need NOT resort to insults if we want to convey our message in a way that the listener can be receptive to our ideas. In fact, Aboy Siraj’s larger message was to show some caring about one another in that if people can gather in a loving environment there isn’t a thing that they can’t solve or can’t accomplish. There must be mutual respect amongst the stakeholders. There must be a pause to carefully listen as we consciously free ourselves from the “implicit bias” that studies after studies show we human beings seem to have some innate dispositions for.

(3). One couldn’t help but wonder if Aboy Siraj had filled an important void in so many of us who never had a chance to see the wisdom of our forefathers firsthand. The shmaglle Addi – the Elderly Statesmen – who played an important role in the continuity of social and communal cohesiveness that has been sorely lacking for so many years now. Who could forget the shmaglee Addi who tried to mediate when the G15 were imprisoned, who in turn ended up in the prison cells themselves; some who are still languishing in the dungeons at advanced age while others ended up dying in humiliation and indignity.

Perhaps, that is the space from which we have been responding with such affinity toward the man irrespective of our political positions vis-à-vis the regime at hand. Who could forget the Jeberti father figures who went from Saudi Arabia to Asmera to speak some sense to the man, some of whom ended up in jail for several years. I would imagine, it is to these deeply disturbing actions the regime had been using that we found a refreshing respite in Aboy Siraj. Curiously, did Aboy Siraj think he was the luckiest Elderly Statesman who outshined a man who wouldn’t even spare the very “Zoba debub” governor, Ato Mustafa Nurhusein, whom Aboy Siraj references in his speech, who has since been sacked into a system that devours its own to never be heard from again – Erasure of the highest order.

One thing that I have been bothered by since Aboy Siraj’s passing is that I didn’t come up with the idea of getting him to perform Haj. I just hope he has had that chance in his lifetime. It would’ve been one ultimate show of generosity toward a man who appeared to be a man of faith. He may not have direct bloodline to my immediate family, but as my countryman though, he certainly filled that fatherly wisdom, the void of which we in Diaspora have been experiencing for decades now. May his soul rest in peace!