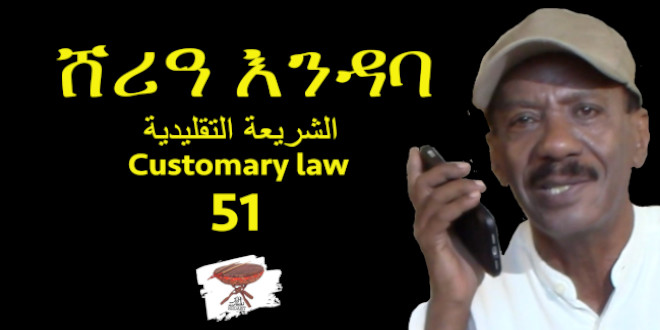 In the 19th century, Abyssinian warlords invaded what they called “Hamassen”, present Eritrean highlands, (like they did for many decades before that, with their hordes who eventually settled in Eritrea. Alula legislated the wedi-Arbaa (citizen- after-40 years) laws that enabled the non-native settlers who resided in present Eritrea, to become citizens. Some of the camps of Alula’s generals became villages, mostly settler-soldiers –and those villages are well-known in the Eritrean highlands.

During the Italian times, Eritrea saw relative prosperity and Tigrayans flocked to Eritrea for work. They toiled, and lived, and assimilated in the society. When all the native “Italian soldiers” returned home, land became in short supply, returning soldiers wanted to live close to their original villages but they found others have taken the land. Life became tough. Soldiers who left their farming culture and became semi-urbans, needed jobs in the cities. The natural sentiment and reaction were a backlash at immigrants—Tigrayans who were commonly, and pejoratively, called Agama. Barba, an Italian immigration officer started to deport “Agama” to Adi Grat and block them at the borders. The enmity and racism against Tigrayans have started.

In the seventies and eighties, an alliance forged between the EPLF and TPLF alienated many Eritreans who have not returned to their country until now. They live disenfranchise in Sudanese refugee camps since the late 1960s.

In 1998, the two allies (TPLF-EPLF) went after each other’s throat. The populist racist propaganda is still going on relentlessly—in Eritrea, it took a dangerous turn and put on a nativist cloak. People ceased to be identified as simply Eritreans, but Eritreans of Tigrai-origin or of Gojjam, etc. Thousands of those who were born and raised in Eritrea, maybe called Eritrea home for several generations, were treated as aliens. And they are big in numbers, because before the confrontation, they had forged an alliance with co-Habesha forces and have been fully assimilated in the society.

In the last two-decades, even Isaias was taunted as a non-original Eritrea, whatever that means. Talk to a nativist and they will tell you how the PFDJ are not “pure Eritreans”, whatever that means. And the targeted segment is large, not a minuscule group who do not resist or push back. The witch-hunt resulted in many Eritreans breaking up into small groups, and the society became atomized.

The TPLF didn’t help. It recognized this fracture and began to massage it in so many ways. And you get the budding fascist group, Eritreans who feel endangered either by the nativists or by the traditional phobia of other non-Habesha cultures.

To me, legally and morally, anyone born and raised in Eritrea is a citizen. Anyone whose psyche is Eritrean is a citizen. However, anyone who doesn’t believe in the Eritrean nation, is a political menace, certainly not an ally. Such individuals and groups have to be fought against with resolve and defeated.

Don’t we all feel proud of our Sharia’a endaba (Hgi-Endaba in Tigrinya and Customary laws in English)? Let’s seek some wisdom in those sheriaa’s. What do they say about citizenship? It’s prudent to learn and know. If not, we shouldn’t claim to be a better society simply because we have written laws that we do not abide by.

Herd-mentality, mob mentality, has brought us to where we are. As a people, instead of worrying about development, peace and justice, we have become immigration lawyers pushing some people out, and pushing others to the sideline, but keeping in only those with whom we have identical cultural traits and social affinity. Nations are not built in such a manner.

The damage to our nation is too serious and we need to take note: either we believe in justice and human values or we are just brutes who act on impulses like animals of prey.

So, one of the damages is evident in the sample thinking of those whose comments that I cannot read all. The brutes (roughly 8%) are ignorant, very freighted, insecure, and dangerous individuals (and groups). Their pronouncements and behavior are a testimony that we have only very little left of our claimed civility and humanity. Please do not try to underestimate the few samples I will read to you; it is a very representative sample.

Societies that educate themselves and enrich their mental capacity become enlightened. Awareness is the key to human development, while ignorance its enemy. We are a backward society that lacks the courage to admit it. And if we do not face it, we are doomed. Worse, we have the most unenlightened group ruling our country and they are making things worse by ignoring the wounds that are festering under their watch.

It’s critical we recognize that anyone born and raised in Eritrea is a citizen with full rights—though Eritreans do not have any rights at the moment. I appeal to all of you to reject the nativist discourse and clean your mind. I appeal to you to be true to the slogans of justice that seem to love and carry everywhere. Let’s not duplicate the Trump and European fascists’ phobia against those we perceive immigrants and shamelessly say “you just came to Eritrea in the 15th century”! Eritrea was not even created in its present form, and the name meant nothing.

At the end, I and many others I know, understand the removal of the PFDJ is a means, not the goal, and definitely not the expected end result. It is a means to reach the goal of justice, peace, prosperity, and stability and create a liberal, democratic system of governance that spreads education and helps refine our primitive culture. It is not to remove a tyranny and replace it by another unenlightened tyranny.