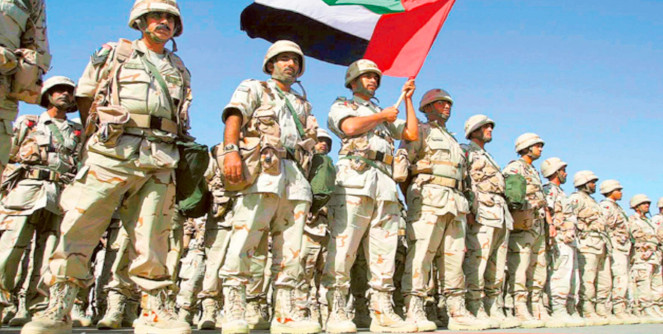 After several statements in July about its intentions to withdraw its forces from Yemen, the UAE has withdrawn most of its estimated 5000 men force. A well-armed militia force of 90,000 men it built, known as the Security Belt Army, considered its proxy force, has filled the vacuum left.

On Saturday, the proxy UAE militia attacked the Yemeni government’s camps and now controls Aden. Saturday’s battles left about 80 Yemeni civilians dead and thousands have fled out of the port city.

The UAE, a major ally in the Saudi-led coalition that has been bombing Yemen since 2015, has left the Saudi forces alone to face their fate in Yemen.

For the last four years, the coalition has been fighting a fierce war against the Yemeni Houthis whose main ally is Iran. However, extensive bombing and ground attacks have not weakened the Houthis but destroyed Yemen and created millions of internally displaced people and millions of others exposed to disease and starvation.

In a surprise move, July 31, 2019, UAE officials met their Iranian counterparts in Teheran to discuss regional security. The move came as a reaction after several oil tankers were damaged by explosives in the Straits of Hurmuz around which a heavy naval force presence is building up. Until its recent rapprochement with Iran, the UAE and Saudi Arabia has been pushing foreign countries, mainly the USA, towards a confrontation with Iran.

The UAE’s move is expected to create a rift with Saudi Arabia, which considers Iran its rival in the region extending from the Persian Gulf to the Horn of Africa.

The UAE’s withdrawal from Yemen seems to indicate that it has recognized that the Saudi led coalition has failed in its campaign against Yemen. In addition, it realized that more escalation with Iran could endanger its oil exporting capacity through the Persian Gulf and the strait of Hurmuz.

The Red Sea coast of Africa

On August 6, 2019, Lt. General Fahad bin Turki Abdulaziz, the commander of the Saudi Forces leading the “military offensive” in Yemen, visited Eritrea and met president Isaias Afwerki. According to sources, the Saudi general’s visit was for consultation about the Assab port military base which the UAE is likely to abandon.

In 2016, the UAE established a military base in the Eritrean port of Assab on the Red Sea as a support station in its campaign in Yemen.

In July 3, 2019, about 80 migrants were killed and dozens injured in an airstrike that hit a camp in the suburbs of Tripoli, the Libyan capital. Many Eritreans were among those killed.

In an interview with ERITV, the government owned media, aired in August 1, 2019, Isaias Afwerki wondered why Eritrean youth were leaving their country. Commenting about the airstrike in a Libyan refugee camp, Isaias said, “planes of unknown ownership bombed the refugee camps [in Libya) which was holding Eritrean, Somali and Ethiopian [refugees]”

However, he should have known the identity of the planes since reports indicated the planes belonged to the retired General Khelifa Hifter is fighting a war against the legitimate Libyan government in a bid to control the capital city, Tripoli.

General Hifter is supported by the alliance of the UAE, Saudi Arabia and Egypt, the three countries with whom Isaias has close ties and one of them has a base in Eritrea.