Eritrean Opposition On A Diplomatic Move

Taking advantage of the political environment following the Arab Spring, the Eritrean National Conference for Democratic Change (ENCDC) and its member organizations have been on an accelerated diplomatic activity in North Africa, Turkey and Europe. The activities of the Eritrean Islamic Party for Justice And Development (EIPJD) are the most newsworthy.

Below is a summary of the diplomatic and media campaigns waged by the Eritrean opposition over the last six weeks:

A delegation from EIPJD led by its Secretary General, Mr. Khelil Amer, has met with various political, religious and academic leaders of Egypt.

These visits were given extensive coverage by Egyptian websites and newspapers, including Al Ahram, the largest newspaper in Egypt and the Arab world.

Accompanying the Secretary General were Mr. Mohammed Mahmoud, its Director of Political Affairs; Mr. Mohammed Saleh Ibrahim, member of Foreign Relations office as well as director of the Khartoum branch of the party; and Mr. Jelal Mahmoud Derir, director of the Eritrean Muslim League in Sweden.

The visit’s major achievement was a meeting with Dr. Ahmed Al Tayeb, the Imam of Al Azhar, which has been, for centuries, the spiritual and intellectual center of the Islamic world.

Mr Khelil’s meeting with Al Azhar was organized by Dr. Aymen Nur, the leader of Ghad El-Thawra Party. Dr Aymen popularized the Kefaya! (Enough!) slogan in opposition to the Mubarek regime and was jailed by Mubarek who then faced condemnations from many corners of the world.

In the meeting with Al Azhar, Mr. Khelil criticized the Eritrean government for its positions on the rights of Eritreans and for its efforts to erase anything Muslim and Arab in Eritrea. The meeting dealt with the need for Eritrean students for religious and educational scholarships to join Al Azhar as well as consultations with Egyptian parties.

The imam of Al Azhar promised to increase the number of scholarships for Eritreans. 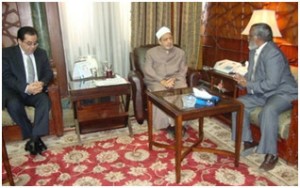 In a press conference organized by Al Azhar, Khelil Amer said “We came to Egypt to talk about cooperation between us and Al Azhar Al Sherif and Egyptian parties and to introduce them to our party and to mirror the reality under which the Eritrean people are living.”

Also in the press conference, Dr. Aymen Nur said that “the political system in Eritrea is worse than Mubarek’s system, and it is a must that aid and support be presented to the Eritrean people.”

In a large meeting organized by the Ghad El-Thwara party led by Dr. Ayman Nur, the cadres of the party heard a speech by Mr. Khelil Amer in which he introduced the party members to the Eritrean opposition in all its civil components and went on to explain the structure of the Eritrean National Conference for Democratic Change (ENCDC) and the role that is expected of it.

Dr. Aymen stated that the party’s meeting hall is at the disposal of all revolutionaries and it is where the Libyan rebels met and that is where the Syrians are meeting and it is open for the Eritreans.

At the end of the meeting, Dr. Ayman presented the EIPJD with an honorary membership to Ghad El-Thwra.

The Egyptian website Alyoum Alsab’e reported that Mr. Khelil Amer said that “the [Eritrean] revolution that many joined and sacrificed for was not complete and became a one-man and one-party state.” He added:  “Eritrea lives without a constitution and without freedom and without political plurality.” He described the country as a large prison and that the ruler, Isaias Afwerki, doesn’t allow any opposition inside the country. Amer also indicated that Eritrea suffers from news blockage and urged the Egyptian media to expose what the country is suffering from.

On March 8, 2012, Mr. Khelil Amer met with the Arab Lawyers Union which was represented by its Deputy Secretaries General, Sayed Abdulghani and Abdulazim Maghribi. Mr. Khelil explained to them the latest developments in the Eritrean arena specially regarding the ENCDC which he said “is an expression of the common spirit for the Eritrean opposition and a convergence of the Eritrean political and civil forces.”

In another event, Mr. Khelil met with Dr. Essam Drbala, the chairman of the Board of Shura of the Islamic Jama’a; Dr. Tariq Al Zmmer the spokesman and the representative of the founders of the party; Dr. Sefwet Abdulghani, the head of the political office; and Ustaz Alaa Abu-Nasser, the Secretary General of the party’s premises in Cairo.

Earlier on March 5, 2012, Mr. Khelil and his delegation had met with the Nassrayt party in Cairo. Mr. Khelil explained that the Eritrean opposition has recently concluded successful congress (ENCDC) and united its vision and the means of struggle. He also explained the situation of the Eritrean youth movements in the Diaspora- he had met with Eritrean youth in Egypt who have created a movement through social media, mainly facebook.

Mr. Khelil called on the Nassryat party and other Egyptian parties to take supportive stands regarding the cause of the Eritrean people and particularly the cause of the youth who taken refuge in Egypt where they arrive through rugged roads to find a better life. Mr. Abdulghani and other party leaders stated their willingness to play the same honorable role the Nassrayt party played after the overthrow of the Mubarek regime from which they suffered as a party together with the Egyptian people.

The leaders of the party indicated that they welcome the EIPJD and all Eritrean opposition forces represented by the ENCDC. They also indicated their readiness to cooperate with and to exert all possible efforts to help the Eritrean cause until the Eritrean people are enabled to establish a pluralistic democratic system that offers freedom, stability and justice.

On March 11, 2012, Khelil Amer met with Dr. Emad Abdelqafour, the leader of the Egyptian Al Nur Party in the party’s offices in Maadi, Cairo. Mr Khelil described to the leader of Al Nur party the plight of refugees and the youth who are facing difficulties while escaping the unbearable life in Eritrea and how they are becoming victims on crossing many borders in search of safety.

On his part, Dr. Emad promised to play a role in assisting Eritreans and stated that under the overthrown regime of Mubarek, Egypt had become introverted and that had a negative effect on its neighbors and the nation including Eritrea. He promised that Egypt will reclaim its position in the region.

In its March 10 issue, the Saudi newspaper Al Nadwa said that Dr. Abdella Al-Turki the Secretary General of the Islamic League received in his office in Mecca Ustaz Sultan Omer the Executive director of Ethar, a British charitable organization that focuses on assisting to improve the living conditions of the Eritrean refugees in Eastern Sudan. Ustaz Sultan and Dr. Abdella discussed means of cooperation between Ethar and the International Islamic Aid Authority.

Mr. Bashir Ishaq, Chairman of the Eritrean Federal Democratic Movement (EFDM) as well as the foreign relations director of the opposition umbrella group Eritrean Democratic Alliance (EDA) and Haj Abdelnur, the public affairs director of EDA, met with the Horn of Africa Department of the British Government. They explained the outcome of the ENCDC and appealed to the British Foreign and Commonwealth Office to bring to the attention of the involved countries and the world community the suffering of Eritrean youth at the Eritrean Sudanese border and in Egypt’s Sinai. 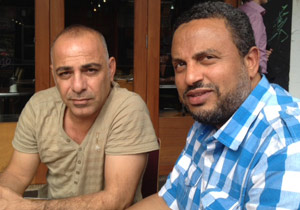 He met with Mr. Fouad Hady a video journalist with the Australian SBS Dateline who on March 6, 2012 made a video reportage about the refugees in Sinai, Egypt the majority of whom are Eritreans. During his trip to Sinai, he had met with some of the Eritreans who had recently been deported to Ethiopia.

Mr. Munir discussed with Mr. Hady the possibilities of making a film documentary on Eritrean refugees in Ethiopia and ways of cooperating with the ENCDC on the project. Mr. Fuad would like to link the plight of the refugees and the dictatorial regime in Eritrea as well as the newly formed entity (ENCDC) by interviewing the leadership.