Though Ethiopia has, denied Saturday’s attack, Gedab News learned that, on Saturday, the Ethiopians have occupied the villages of Adi Teklai, Sheshebit and surroundings. These two villages are close to the village of Badme which was the flashpoint in the fierce border war of 1998-2000 where about 70,000 soldiers died from both sides.

Gedab News has also learned that on last Thursday’s attack, Ethiopian forces have occupied a swath of land east and west of Bada including the villages of Renda, Detsen, Alha, Gindab where the Ethiopian forces still are as of the time this report is published. 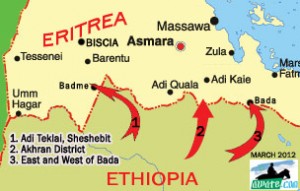 The military objective of the attack seems to be to destroy Ethiopian opposition camps that are backed and supported by the Eritrean government.

Reached by phone, Eritrean opposition leaders tell Gedab News that they were not only NOT informed about Ethiopia’s military operation, even as a courtesy, they actually learned of them along with the rest of the public.

Ethiopia has long threatened to take military action in Eritrea for the Eritrean regime’s role in destabilizing the region by arming and training Ethiopian and Somali armed groups.  Over the last few months, internal power struggles within Ethiopian opposition groups in Eritrea have resulted in many surrendering to the Ethiopian government and providing actionable intelligence.

According to those who have either surrendered to Ethiopia or those who have given up, the Ethiopian opposition groups are scattered throughout the Eritrea-Ethiopia and the Eritrea-Sudan borders, with many not too far from Sawa military camp, barely 30 kilometers away from Nevsun Resources’s gold mine concession in Bisha.

Since the last Eritrea-Ethiopia ground war of 1998-2000, the Ethiopian government has acquired long range missiles which have shifted the balance of power further in its favor, which may explain why it believes that the Eritrean government is not in a position to retaliate.

In a curious protest letter to the United Nations, the Eritrean government essentially quoted the Ethiopian press release without providing its side of the story, or chronology, of what transpired on March 15, 2012.