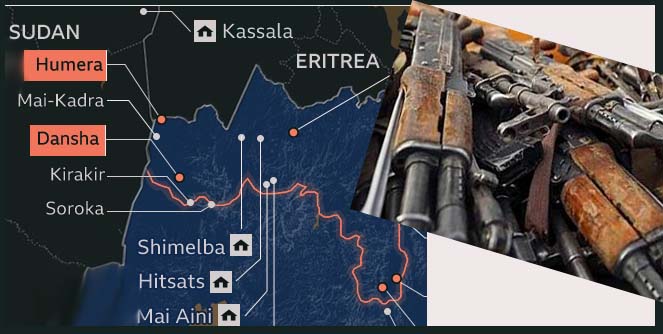 A few days after the fall of Humera in Tigrai last November, Eritrean and Amhara region militia forces seized an arms cache in the town. According to our source, the forces didn’t search for too long to find the secret storage place, “they must have had prior knowledge of where the arms were hidden.”

The cache consisted of boxes of ammunition including AK47s and other automatic rifles numbering around 800 pieces. It belonged to an Eritrean opposition group with a camp in the Humera region for many years. There were also other Eritrean groups stationed in the same region.

Local authorities of Tigrai had denied several Eritrean opposition groups permission to carry out military operations by infiltrating into Eritrea. They remained inactive in their camps. However, over the years, a few groups who had the support and approval to develop and activate their military wings infiltrated into Eritrea a few times, but their operations remained  insignificant.

Eritrean opposition members accuse the TPLF of favoring groups whose goal is to set up a replica of the EPRDF system of government in Eritrea. However, an overwhelming number of Eritreans, including several major opposition organizations reject such an idea.

The Movement for the Liberation of Eritrean Kunama (DMLEK), and its leader Qernelios Esman, maintained close relations with the TPLF. The DMLK’s armed group which existed for about two-decades was engaged in several hit and run operation against PFDJ forces but didn’t develop to become a significant fighting force. There were also several groups that kept small inactive military wings of 10-100 combatants.

In the wake of the recent conflict in Tigrai, about thirty DMLK combatants fled to the Sudan where they are now living in a refugee camp. However, the whereabouts of the combatants of other groups is unknown and it is possible they could have melted away in the region.

On December 8, 2020, an Eritrean delegation headed by the foreign minister Osman Saleh and Yamane Gebreab, “advisor to Isaias Afwerki” delivered a message from President Isaias Afwerki to General Abdulfatah Al Burhan, president of the Sudanese sovereignty council. According to the official PFDJ government media, “The message and ensuing discussions focused on current developments in Ethiopia and their ramifications for regional peace and stability.”

Gedab News learned the discussions centered around the Eritrean government’s demand asking Sudan to hand them over the Eritreans who fled from Tigrai. However, Sudanese authorities rejected the demand saying the refugees are under the protection of the UNHCR not Sudan.

Meanwhile, news coming out of Eritrea say there is a presence of a few armed people who are roaming in the mountains around in the Gash region. Their identity is unknown and they “could be either Eritreans or Tigrayans.” It’s also unknown whether the armed men are regrouping, or moving in a coordinated manner, or each is on his own.