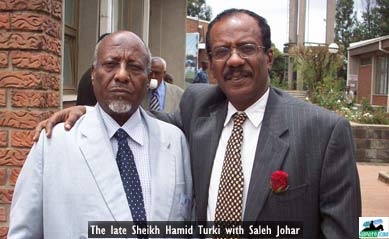 Sheikh Hamid Turki died today (Wednesday) in a Khartoum hospital at the age of 70. He is a veteran of the Eritrean struggle for self determination.

Sheikh Hamid joined the Eritrean Liberation Front (ELF) in the mid 1960s and later studied law in an Iraqi university. He served in different position before being appointed as deputy head of the Appeals Court of the ELF.

In 1982 Sheikh Hamid co-founded the a movement known as The Muslim Pioneers Movement which was the precursor of several Islamist organizations in the Eritrean opposition.

In the 1980, Sheikh Hamid together with many other combatants was imprisoned by the left-leaning ELF leadership which purged conservative Muslim elements from its ranks. In reaction to the purging, many conservative Muslims formed the Muslim Pioneers Movement which later gave birth to several Islamist organizations that considered the Eritrean liberation front organizations “communists.”

Sheikh Hamid Turki is also a founding member of the Eritrean National Alliance, an opposition umbrella formed in 1999. And in 2002, he participated in the founding congress of Eritrean Democratic Alliance (EDA) where he be representative his party, the Eritrean Islamic Party For Justice and Development (EIPJD) for the last ten years.

Until his death, Sheikh Hamid served as political affairs adviser and a member of the Shura Council of the EIPDJ. His colleagues remember him most for his conciliatory approach to politics and his unwavering position on matters of justice and equality among Eritreans.