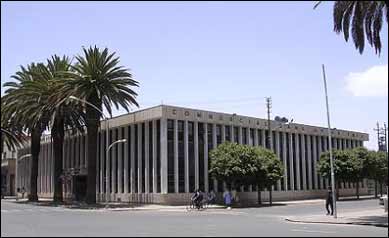 remittances from the Eritrean Diaspora is drying up quickly and dropped by about a third in the first half of 2014 compared to the same period in 2013.

Gedab News learned that the Eritrean regime is going through a crisis exasperated by the unraveling of the secret operations of Himbol, the ruling party’s foreign currency collecting firm. This new crisis has dealt a fatal blow to the already deteriorated Eritrean economy which is monopolized by the ruling party.

The line separating the finances of the Eritrean government and the ruling party is blurred and wrapped in secrecy.

Recently, several financial agents of the regime disappeared together with the money entrusted to them; an agent who lived in an Arabian Gulf country has disappeared with $5 million.

As a result, presidential palace sources indicate that Hagos “Kisha” is going through pressure from President Isaias Afwerki for failing to control theft of party money and maintain the flow of hard currency into the country. The news also indicated that the president is distancing Hagos “Kisha” from major financial decisions.

Sources informed Gedab News that, “remittances from the Eritrean Diaspora is drying up quickly and dropped by about a third in the first half of 2014 compared to the same period in 2013.”

The situation has worsened after Yemane Tesfai, the general manager of the Commercial Bank of Eritrea, was arrested. Yemane was the second most important man after Hagos “Kisha” Gebrihiwet, the manager of all the party’s’ businesses and finances.

Yemane, who often accompanies regime officials in their travels to buy arms, on important business missions, joined the EPLF, the precursor to today’s ruling party, in mid 1970s bringing with him money he grabbed from an Ethiopia bank where he worked. After the independence of Eritrea he became the Manager of the Commercial Bank of Eritrea which gradually took over the task of the central bank of Eritrea.

Tekie Beyene, the last governor of the bank of Eritrea, has been frozen since the border war following the launching of the Eritrean currency, Nakfa, which contributed in igniting the border war with Ethiopia.

Experts believe the destruction of the Eritrean financial institutions reached a point of no return when the commercial bank became a tool of illicit trade serving the ruling party. This undermined the role of the Bank of Eritrea as a central bank in formulating the financial policy of the country.

The bank, which acts as a treasury of the ruling party, is believed to maintain, “two sets of accounting books, one for the Eritrean government and another for foreign entities.”

According to a UN report, “Eritrea manages two parallel economies: a formal economic sphere ostensibly managed by the State, and an opaque, largely offshore financial system controlled by elements of the ruling PFDJ party and their supporters.”

The report adds, “According to government officials, the formal economic system involves transactions almost exclusively in nakfa, the non-convertible Eritrean national currency, and is characterized by a chronic hard currency deficit.”

That deficit has been worsening and, allegedly, Isaias Afwerki blames Hagos “Kisha” and Yemane Tesfai for it.

Himbol, a firm owned by the ruling party, has branches all over the world and it operates secretly from community centers run by the supporters of the regime. Though Himbol is known among Eritreans as a money transfer company, its mission is collecting hard currency from Diaspora Eritreans for the benefit of the ruling party.

The UN report states that the finances of the party are “managed almost entirely offshore through a labyrinthine multinational network of companies, individuals and bank accounts, many of which do not declare any affiliation to PFDJ or the Eritrean State and routinely engage in “grey” or illicit activities.”

The financial crisis has cast its shadows on the lucrative Himbol operation and a domino effect enticing, “several financial agents to disappear with considerable amounts of money, one of them with $5 million” from an Arab Gulf country.

The Eritrean regime has been focusing on revenues from mining investments as the volume of traditional remittances has been dwindling year after year. To this effect, it has been holding yearly seminars on mining to woo investors.

In the seminar that was held in 2013, potential investors questioned the wisdom of investing in the Eritrean mining sector when the government had just arrested its minister of mining Mr. Ahmed Haj Ali.

This year, investors questioned the wisdom of investing in a country that just arrested the general manager of a commercial bank that doubled as Eritrea’s central bank.

On October 1, 2014, the two-day seminar on mining was opened by Gen. Sebhat Ephrem, the former defense minister and new Minister of Energy and Mines, who replaced his arrested predecessor a few months ago.

Ahmed Haj Ali, the former Minister of Energy and Mining was arrested in the spring of 2013. He was accused of collaborating with an insurrection by members of the Eritrean Defense Forces that was led by the late Colonel Saied Ali Hjay. The insurrection was quickly quashed due to betrayals and the government arrested the elements who participated in the insurrection. Colonel Saeed Hjay was killed after his arrest.