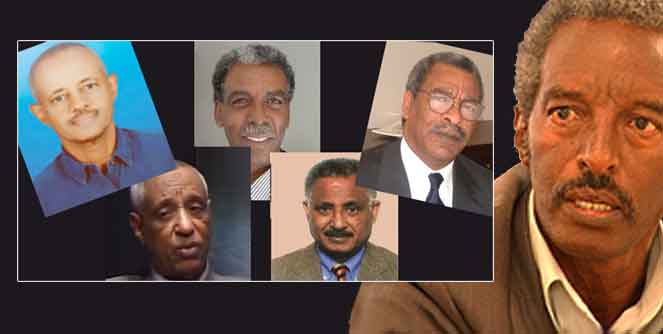 Five former Eritrean officials issued a joint statement in support of Berhane Abrehe, the former minister of finance who is openly challenging Isaias Afwerki to step down.

The officials who live in exile declared their unequivocal support for the “the call made to depose Isaias from his position and hand power over to the people.” The statement added, “we call on all our coworkers and colleagues from the armed struggle era to rise up in support of the Berhane Abrehe’s call.”

Last Sunday the two books that were authored by Berhane Abrehe were launched in Washington, DC. An audio recording by Berhane distributed on the Internet preceded the launch of his books.

The recording brought to rest a brief confused that ensued after Gedab News published the news about the books. A few people had cast doubts on the news claiming that un-named individuals wrote the book and used Berhane’s name. Berhane’s friends handled the printing and they are now distributing it.

In the audio clip, Berhane asked Isaias Afwerki to call for a meeting of the “national assembly” which didn’t meet for nearly two decades to the extent that many Eritreans consider it non- existent. In addition, Berhane warns Isaias that, “in the meeting, the assembly will ask you to step down and it will elect your replacement.” He also challenged Isaias to a face-to-face public debate.

The ruling party is known to take swift steps and drastic measures to punish anyone who defies the decisions of Isaias Afwerki or challenges him. An observer said, “the regime certainly does not tolerate the actions of Berhane, but it is a mystery that so far it has not taken measures against him.” Many of the former minister’s friends and colleagues are concerned about his safety because he is still living in Eritrea.

The names of two former assembly members who live in exile are missing from the statement: 1) Haile Menkerios, former ambassador to the United Nations, and 2) Hiwet Zemicael, whose official capacity was unknown.