Etiyopia Hoy, May You Rejoice! 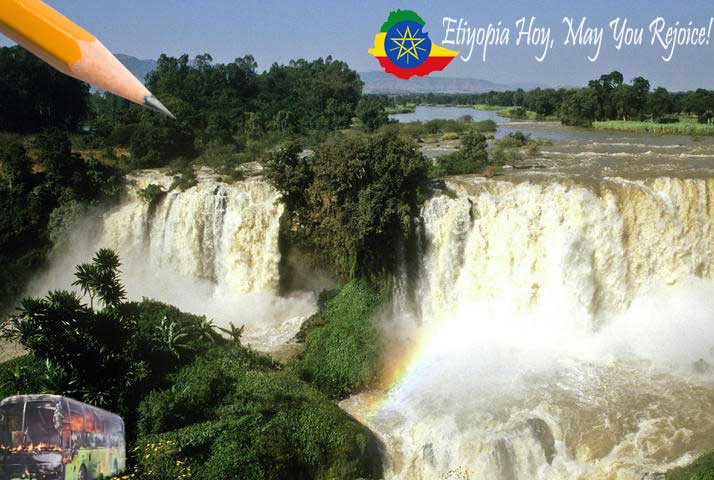 If not for the Ethiopian-Eritrean border war of 1998, the Eritrean ruling party (PFDJ) would have continued harassing anyone who criticized or expressed resentment towards its exclusive relations with Ethiopia. Instead of healing the old wounds between the two peoples, it used Ethiopia to expand its selfish commercial interests and bolster its security might. Between 1991 and 1998, the PFDJ made Ethiopia its backyard and chased away opposition elements and organizations from the country. During the seven bloody years, it assassinated, kidnapped, exiled dissenters and opposition elements—many of whom were made to disappear with no trace. On the other hand, its operatives and affiliates were prospering in Ethiopia.

During that period, the collaboration between the two governments seemed to be a never-ending honeymoon. Trade flowed across the boundaries freely. Eritrean investments, overt and covert, poured into Ethiopia. Huge wealth was created and a new class of entrepreneurs–either blessed by or affiliated to the ruling parties–flourished. In Eritrea, the entire politics of the country and its economy became the monopoly of the ruling party.

In March 1999, the Alliance of Eritrean National Force was established in Ethiopia. That umbrella has gone through many developments and currently, the situation of the opposition forces has reached a despicable stage. To this date, after eighteen years of struggle, the opposition has little to show as an achievement. However, it is also important to note that the Eritrean opposition suffered from lack of independence, lack of funds, and lack of understanding. It was not given a chance to either succeed or crumble under its own weight, not the weight of others. Unfortunately, those who are supposed to support it, or be its allies, were busy stoning it. Having said that, however, at the center of the opposition’s problem is the absence of a clearly defined nature of cooperation between the Ethiopian hosts and the Eritrean guests.

The unrest that Ethiopia witnessed

The Eritrean opposition has a clear position on the political situation in Ethiopia: pollical forces that are allied with the PFDJ are its enemies. In the absence of a legitimate government in Eritrea, and while Eritreans are denied the right to live freely in their country, the PFDJ is nothing less than an enemy. It also follows that its allies are enemies, and there should not be any mincing of words.

The Ethiopian government faces a serious opposition from groups that are being nurtured by the PFDJ government. Of course, some were incubated by the likes of Anna Gomes, the notorious Hanna Gobezie of the European Union, who in 2005 played a destructive role in the agitations that led to bloodshed in Ethiopia. As far as justice seeking Eritreans are concerned, it must be clear to all the forces allied with the PFDJ regime are by extension enemies of the forces of justice. Therefore, the Eritrean opposition doesn’t have to explain itself as where it stands in respect to the Ethiopian opposition who are allied with the PFDJ.

Despite that, a country that have no opposition is a sick country, and Ethiopia has its own local opposition, with demands of democratic issues concerning all its citizens. It faces opposition to some of its policies that has serious ramifications on the lives of its citizens, mainly the land law and the nature of its federation–which may boil down to power sharing. These demands are legitimate and vital for stability and for democracy to flourish in Ethiopian.  In addition, there are a host of other issues that concern Ethiopians and we hope their system would continually improve and expand to accommodate the grievances of its citizen and strive to resolve them.

Since the unrest started in Ethiopia in 2015, justice seeking Eritreans were worried and hoped for a quick resolution of the problems. On the other hand, the Eritrean ruling party and its affiliates have been fanning the conflict and working hard to see raging fires engulfing Ethiopia. Understandably, if Ethiopia was on fire, there is no telling where the fires would have stopped. And only the naive would think that Eritrea wouldn’t have been burned by it.

We do not believe Ethiopia must be destroyed for Eritrea to prosper; we abhor such thoughts. The destruction of Ethiopia can only satiate the ego of the PFDJ and its supporters who live to see only mayhem and violence . They will stop at nothing to make that happen, however, their satisfaction would only be limited to a smirk! They are willing to see a nation destroyed for the sake of a cheap smirk they would sculpt on their faces for moments. Imagine what is befalling Eritreans under the grip of tyranny with such a thought!

On the opposite side, though not accentuated, there are Ethiopian elements who embody ill wishes for Eritrea. At least they foresee a weak Eritrea that cannot stand on its own, a country that they wish would kneel down under their feet and live in perpetual fear and instability. It is as despicable a position as that of the PFDJ.

Despite that, the general Eritrean opposition wish is for the era of bloodshed and destruction to be over. The region should not foolishly destroy in a year what it built over decades. The culture of peace and mutual respect and coexistence should be promoted by every caring citizen of the two countries.

In short, we are confident that Ethiopia has established a working system that can confidently accommodate its opposition and its dissenters. If changes are required in any existing arrangement, it should be changed. Nothing is etched in stone, and so far, Ethiopia has proven it can resolve its problems peacefully. We hope the government officials, social leaders, business people, and the intellectuals would summon their wisdom and contribute positively in pursuit of a resolution to their problems instead of feasting on them for personal, sectarian, and partisan considerations. At the end, neither the government nor the opposition should undermine the stability of the country and endanger the lives of the common people. It would be an unforgivable crime against the nation to jeopardize the successes that were so far registered on the economic, political and governance fields.

The situation of the Eritrean opposition

Eritreans believe the Ethiopian policy towards Eritrean opposition is still clouded in secrecy and intelligence activities. That feeling is nurturing unhealthy suspicions and anxiety. Considering the volatile region where the two countries are located, reckless politics might lead to catastrophic results. And recklessness should be shunned firmly. The fears, suspicions and the poisoned atmosphere that is crippling the Ethiopian-Eritrean relations must be cleared. It must be discussed openly and understood, to help in ameliorating the situation. However, that requires a proper platform for discussion. So far, the nature of the relations lacks serious intellectual input due to many internal and external factors. It’s understandable that Ethiopian officials who manage the Eritrean portfolio must be executing some sort of policy, whether it is drawn by the Foreign Ministry or the security and intelligence sectors. Whatever it is, nothing can be said about it except it is not working; it is time for a real assessment and evaluation of the experience. The unclear policy is one of the main reasons that has crippled the Eritrean opposition.

There are several initiatives that wish to address this problem—we know of one that is different from all the past initiatives. Such an initiative should keep away from partisan, factional, regional, and sectarian loyalties. It should address the issues from a strictly nationalist perspective without ignoring the serious local and regional interests of Eritreans. However, the focus should be on ways to help rejuvenate the opposition by pinpointing the problems that thus far has made it weak. It is also important that it should aim at helping the Eritrean opposition to primarily rely on its own political devises to either fail or succeed. In addition, the initiative must take into consideration the Ethiopian fears, suspicions, and national interests that must be addressed to develop a common, mutually beneficial strategy.

Finally, we hope to see the initiative see the light of the day so that the Eritrean opposition can get a new lease of life. It is time it is taken out the coma state in which it has been bound for over a decade.