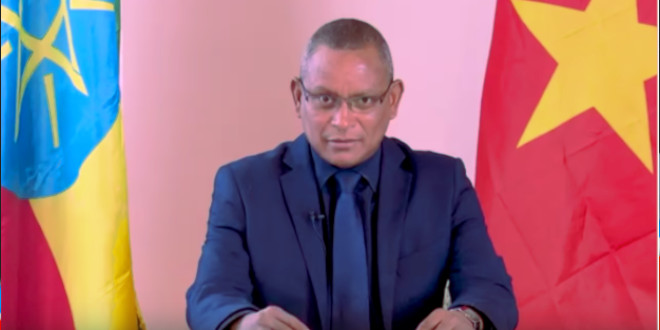 Dr. Debrestsion is the chairman of the Tigray People’s Liberation Front (TPLF) and the deputy President of the Northern Ethiopian Tigray Region.

The EPRDF, formed under the auspices of the TPLF, is a coalition of four Ethiopian rebel groups that defeated the Derg regime in 1991 and formed a government based on Ethnic federalism. TPLF was instrumental in forming the coalition under the leadership of the late Meles Zenawi.

Following the popular protests spearheaded by the Oromo Qero movement, in February 2018 Hailemarian Desalegn resigned from his position as prime minister of the country. Two months later, in April 2018, Dr. Abiy Ahmed replaced him as the prime minister of Ethiopia and the chairman of the EPRDF coalition.

However, Abiy Ahmed’s relations with the TPLF started sour and continued to deteriorate as many senior TPLF officials were publicly defamed through the state and regional sponsored media outlets. The relentless campaign and accusations levelled against TPLF officials, such as abuse of power and corruption became a populist cause and the entire Tigray region was targeted. Tigrayans, and their region, were increasingly alienated by the Abiy leadership distancing them from the federal Ethiopian economy and politics.

In addition to the four members of the EPRDF, there were six other parties governing the rest of the Ethiopian Kilils (regions): Afar, Amhara Benishangul-Gumuz, Gambela, Harari, Oromia, Somali, Southern Nations, Nationalities, and Peoples’ Region Tigray. A tenth region, Sidama,  has been recently created after a referendum to form its own autonomous region. In addition, Addis Ababa and Dire Dawa are administered as separate chartered cities,.

In what is considered the most blunt criticism, two days ago Dr. Debretsion delivered a speech regarding the current situation between the TPLF and the federal government led by prime minister Abiy Ahmed. He levelled an accusation against the government of Abiy Ahmed describing it as “The force leading Ethiopia [that] is working diligently to destroy the people of Tigray and Tigray.”

The political difference between Abiy and the TPLF has been escalating since former came to power in April 2018.

Debretsion added, “Policies that were promulgated by the EPRDF are being openly violated…the federal system and the constitution is in a serious danger.”

Explaining why the TPLF is targeted, he said “the TPLF refused to participate in their unprincipled goals, and the ruling forces are working on their plans… to finish off Tigray, and [the matter] is getting worse.”

He said, “we shouldn’t be inflamed,  we are not, because we understand their goals which are becoming excessive and getting more serious. What they worked on so far is not minor…the roads leading to [Tigray] have been blocked to stop the movements of vehicles…they have disintegrated the EPRDF party; and formed a different party with different program.”

With bitterness, he described the decision of the TPLF’s earlier allies, he said, “the three organizations are gone, they have rebelled, they fell over the cliff, they abandoned the path they were in, but we haven’t abandoned it.” He further stressed, “this is what we called betrayal, they didn’t only betray us, they have betrayed their people, the poor people, they betrayed the country and we consider them traitors.”

Debretsion also made a serious accusation against Abiy’s government saying, “on top of that, they have exposed the country to outsiders, but this can be overcome and they will shame themselves, history will shame them.”

His defiantly stressed, “if we hold on to the direction of the people,  and [maintain] proper views, by reinforcing our organization and unity—what would be impossible? How would that be impossible? Nothing is impossible.”

He finally assured the attendants of the conference, “we are not messengers of anyone but your messengers…if you ask us jump, we will ask how high, there is no other earthly power that gives us orders, but our people.”

Meanwhile, regional and international observers are following and accessing the political situation in Ethiopia with concern. However, the future of the federal system of Ethiopia that was established almost three-decades ago following the defeat of the Derg regime is unpredictable.