Eritrean Names: An Anguished Search For The “Bleeding-Age” 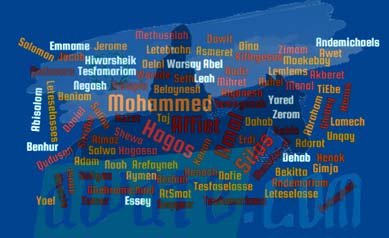 The subject of Eritreans is a vast subject straddling ethnic groups and religions, and title of this article could be somewhat misleading. This piece will largely deal with the ethnic group and religion that I intimately know: Tigrinya and Christian names.

When I was growing up, my version of ancestoy .com was reciting the lineage of my paternal and maternal genealogy. And I suspect that was also the norm for most Eritreans. When later in life I reflected with nostalgia on those childhood days, I discovered that as I went further in time, the names were strikingly different from the more recent ones. The men’s names were Unqay, Maekebay, Warsay, Zerom, Seqqaur and AtSmat.The Women’s names included Asmeret, Akberet, Gimja, Zimam, Ghidey, TiEbe and Jerome.

It is very hard to decode the meaning of every name in the examples, but from time immemorial Eritreans infused their predicaments, hopes, dreams, and aspirations in the names of their children as you can glean from: Unqay (gem), Maekebay (conserver), Warsay (my inheritor), Zerom (their seed) and Jerome (their seed, female), Tiebe (may she live) and Ghidey (my share).

Even after the dawn of Christianity, the names summoned aspirations and hopes and dreams and what gripped the society at a particular epoch, often conflated with Christian inspired spirituality like: Qudusan, Leteselasse, Letebrahn, Tesfaselasse, Ghebremichael and Andemariam and Kifleyesus. These names replaced the Unqays and Zimams, these were in turn deposed by more exotic Hebrew names; harvested from the Bible as Eritrean Christians deepened their knowledge about the Bible, its actors and players, its leaders, murderers and rapists, eunuchs, castrates and slaves. The Hebrew names mushroomed, the Major Prophets and princes like Abraham, Beniam, Isaac, Jacob, Daniel, Henok, Mussie and Dawit first became hits with the urbanite, the “sophisticated” population who worked under the white colonizers and were privileged to learn the Bible.

When the rest caught up, the elites moved on to the most obscure names in the Bible, to the “cutting-age”. Yoel, Henos, Benhur, Lamech, Essey, Yosaab and the occasional Methuselah crept. The society that believed in “shim ymerih tuuwaf yebrih” abandoned the old tradition and started naming its children, its “warsays”, after Biblical personalities, after rapist, womanizers, murders, after the adulterers and the raped and the followers of idols. They named their inheritors Abisalom, Solomon, Dawit, Tamar and Dina and Abigale and Jezebel. But before these obscure names exploded, the advent of Ghedli and the Eritrean aspiration for independence intervened, yet again the naming formula changed in search of that “bleeding-age” name. The revolutionary names became hits, albeit briefly. Names like Emmame (amendments), Awet (victory), Erdi (trench), Fedayeen (guerrilla fighter) aggressively competed with the traditional and the Hebrew names. The traditional names became victims of ridicule and signs of unsophistication. Many of the tegadelti jokes and put-downs against each other hankered on names.

The Maekebays, the Unqays and AtSmats of Eritrea have long been dead; and once the Tesfamariams, Qudusans and Leteselasses and Andemichaels are long dead, one will not be able to recognize whether a person named “Henos Lamech Henok Benhur Abel” is Eritrean or Israeli. Eritreans do not typically use last names, but the tsunami of societal changes, the disintegration of the family will not be friendly to the “antiquated” yet potent tradition of tracing once ancestry.

The Eritrean family that has been broken by the PFDJ and is on the periphery of demise, was once a sacred and vibrant institution that remained unscathed even during the ages of invasion. Memorable events of the family included huddling around the dinner table; enjoying the meal after grudgingly chewing the dry bread (barrkot) broken by the father, the mother spreading the steaming stew on the “injera”, the children salivating, silently cursing the dry bread as the smell of the spices tickled their nostrils, teased their taste buds and wetted their mouths. And it was during these sessions that family history, indelible history, old history, vivid history, verbal history, the history of history was told and retold, searing it forever in the young minds, minds that were nonchalant about going to Sawa next month, minds that did not grieve the death of their siblings as they crossed the border, minds that looked forward to the next day, minds that fondly remembered yesterday and basked in the gift of today.

Culture and identity are dynamic, they change, they are also instantaneous; you are what you are right now, you and your children may acquire different culture and identities to identify with. Christianity has immensely influenced a large part of the Eritrean culture and insomuch as it underpins their faith, it will be imbedded in both their culture and identity. But the society that obsessively talks about its culture, “ezi aybahlinan eyu, and nay abotatna wegiE aykonen” failed miserably when naming its inheritors, its “warsays”, who are supposed to keep that baton, retain that pristine culture, and guard that chastity of the uncompromised identity. A tall order!

Names are paramount to an identity. Take for example English names before the Biblical names popped up and exploded. Herb, Marjorie, and Duncan were common Herbs of this world like the Seqquars and Unquays of Eritrea are long dead, but since the society uses last names, they can be identified. Ancestory-com can map their lineage with the click of the mouse. Eritrea has no government, no opposition and now no ancestry .com. The unit that was a jack of all trades and a master of all, the family is on the brink of facing the fate of Unquay and Zimmam, Seqquar and Gimja.

In Biblical times people were also given names that invoked predicaments, hopes, and dreams, aspirations and prophesies and fears. The names from Adam to Noah for example, as some Christian scholars deem were codes for the coming of Jesus Christ. Many Eritreans find the names Henos and Lamech “exotic” and “sexy”, “mai zeyteame”, but they may find some of the following information about the meaning of names from Adam to Noah shocking.

Many Christian scholars believe that the meaning of names from Adam to Noah is a code for this: “Man is appointed mortal sorrow; but the blessed God shall come down to teach and his death and suffering shall bring the despairing rest and comfort.”

The names, Leah and Rahel are common when an Eritrean family is blessed with twin girls. The devout and the traditional Christians alike will rhapsodize over the story of the twins who married the same man. They will narrate with excruciating detail: how Jacob, once a mama’s boy, went from rags to riches of blessing with a modest but shrewd lentil stew investment, how he wrestled a nameless angel and got injured in the fight and won, how he knew about the formulation of a miracle aphrodisiac so his sheep could multiply and be fruitful, yet was willing to be enslaved for 21 years to marry the love of his life—Jacob’s version of protracted struggle. Their faces glow with pride, telling you how they have liberated their daughters from the yoke of tyranny that the names Silas and Mihret and Hagossa have imposed. What they do not know is that Leah means exhausted/weary and that Rachel means, a female sheep. The society that brags about the importance of its culture and that once almost made “shim ymerih tuuwaf ybrih” a bedtime story, has totally relinquished it by obsessing with strange names and sometimes even with unflattering meaning, all in search of that “bleeding-age” name.

Names such as Belaynesh, Alganesh, Semaynesh, Ethiopia and Shewa and Arefayneh were popular during the early days of Ethiopian occupation, but soon lost their luster when Ghedli got traction. Unceremoniously many “Ethiopias” changed their names to either Eritrea or Simret. As the balance of power tilted in favor of Ghedli, so did the names.

I am uncertain what the Tigrayit names sounded before the advent of Islam, but I can surmise that names like Hazot (Ghidey), Affiet (health/forgiveness) and Bekitta (healthy) and Adorot and Nafie were common. But the modern names, like their Christian counterparts are anguished with the search of that “bleeding-age”. Menal, Amal and Delal were hits at one point.

I used to know a teashop owner named Hiwar-Sheik in the Sudan. I wondered what his name meant: If it’s a conversation with the Shiek or the lad of a Shiek, as “Hiwar” can also means the baby of a camel in Arabic.

The Jeberties used to knit their religion and their language in their names: Mohammed Hagos, Mohammed Berhan, SittiNur and Negash, used to be stables. The Dehabs, Lemlems, Almazs have long been replaced by some exotic Arabic names like Salwa and Nahla. And when the Mohammed Hagoses, Negashes, Lemlems and Dehabs and Hazots and Adorots are dead, it would be impossible to tell whether a person named “Nadir Taj Aymen” is an Eritrean or a Saudi.