The Eritrean National Congress For Democratic Change, which was held between November 21 and November 30 in Hawassa (also spelled Awasa/Awassa), Ethiopia, elected 127-member National Assembly. Here are the names of the elected assembly members grouped by the regions from which Eritrean exiles elected them or the umbrella group they belong to: 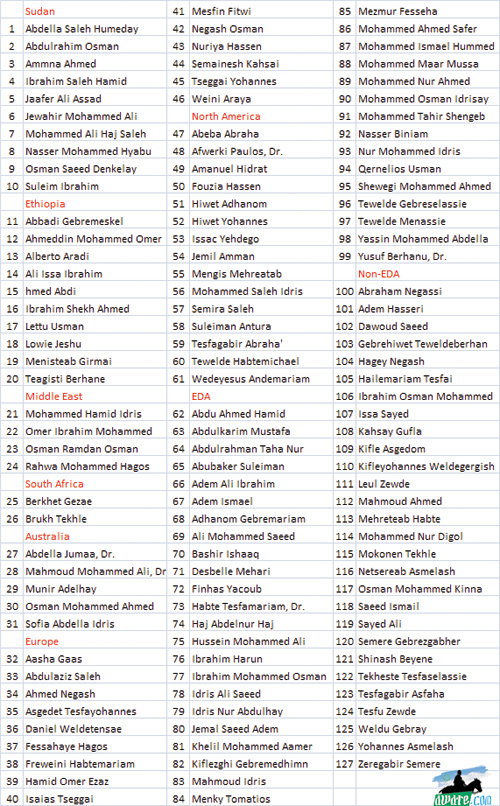 The 127-member assembly further elected its chairman and his deputies and secretaries as follows:

Elected from the Eritrean Democratic Alliance or EDA(*)

Finally, the Executive Committee made appointments to the different offices from among its members as follows:

* The Eritrean Democratic Alliance (EDA) is a political umbrella that was formed in 1999 (then known as Alliance of Eritrean National Forces.) Over the years, it has been an alliance of nearly a dozen diverse political organizations, many of whom splintered, merged or changed names.  Since its foundation, as it underwent various changes, it held one goal as a constant: national conference/national reconciliation of Eritreans. The congress was the outcome of many Eritreans within and outside the EDA who worked for over a decade to make it a reality. Enjoying the legitimacy of direct election of Eritrean delegates, the national congress now supersedes the EDA Charter as the highest authority of the consolidated Eritrean resistance.