Posted on August 8, 2022 by Semere Andom in Articles 0 Comments 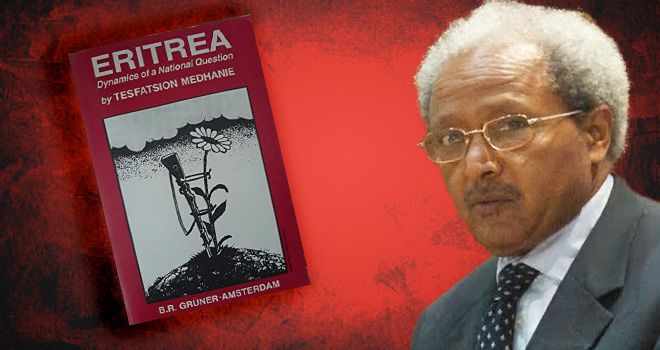 In a speech he delivered to Selfi Hidase gathering, Dr. Medhanie, without equivocation and nuance, pointed at TPLF as the archenemy to Eritrea’s sovereignty. To obviate the threat from this enemy, he told his audience, Eritreans must coalesce and ally with the government of Ethiopian because if TPLF has its way, the disintegration of both countries is inevitable and that the anguished dream of TPLF is to establish Greater Tigray on the rubbles of Ethiopia and Eritrea. Dr. Medhanie combines social media and hearsay sources to support his grand claim. PFDJ’s old love—our sovereignty is at risk, has now become Dr. Medhanie’s new affair, compelling him to abandon his long-standing assertions that democratic institutions must underpin confederation. And he admitted that much, “because of the current precarious situation; I have amended my previous stand on this topic.”

Dr. Medhanie hedges by making a perfunctory anti-PFDJ comment: “we all know that Isaias Afwerki is anti-democracy,” but fails to name the imminent and present danger that PFDJ poses to Eritrea’s sovereignty and its posterity. To buttress his call for confederation and unity and ease the angst of his audience, he stressed that confederation is a loose arrangement between nation states—where members have the freedom to leave as they please.

Bereket Mengisteab, at the height of the 1998 carnage, told Eritreans that life and living are meaningless without securing every inch of our land. Youngsters wielded spades and hoes and danced to Berket’s tune of death. Spades and hoes—to dig graves for the “honor” of death was the symbolism conveyed.

Twenty years on, Dr. Medhanie channeled PFDJ and Bereket by telling his audience that the ruling group in far-away Tigray is more dangerous to Eritrea than the regime at the helm. Intellectual in his pedigree, a trailblazer in his record, but in this speech, he disappoints tremendously. He quotes hyper Tigrayan dreamers and social media sources and echoes the untenable “NoMore” gang. His conclusion is reminiscent of Berket’s second war-time lyrics: “postponing any question or opinion, be it small or big; the land and border should be a priority.”

In this Bereketisque speech, Dr. Medhanie has regressed to crowd mentality, a mentality that, in the first place, brought Eritreans into this dark place. Dr. Medhanie has abdicated. Abdicated his intellectual responsibility by deliberately electing not to name PFDJ as Eritrea’s archenemy and an existential threat. Dr. Medhanie once distinguished himself from the crowd with his staunch democratic ideals but now has become the poster boy of the crowd mentality.

He pointed out that in Eritrea’s 50-50 makeup of Christians and Muslims, there is no risk of conflict emanating from domination. This is anachronistic. It is irrelevant and borders on dishonesty. Mendacity at its best. This issue has been insignificant in Eritrea since the advent of Ghedli. In fact, Ghedli’s notable accomplishment was strengthening the bond among our people as they discovered each other during their long ordeal. On the contrary, PFDJ’s longevity is the catalyst for creating the cleavage necessary for this disaster. The tiny ethnic groups, some on the verge of extinction, are wary of domination. And rightly so. In a coerced confederation, like what Dr. Medhanie is proposing, devoid of intuitions and intellectuals with integrity, the several minority ethnic groups will be in a precarious situation as the influential groups broker the power, dolling it for their own means.

Dr. Medhanie also avoided other crucial factors when figuring out the archenemy of Eritrea: the ethnic conflict that simmers and often erupts in Eastern Sudan and is fanned by none other than PFDJ, with whom he wants all Eritrean to collaborate in combating the fictitious threat that TPLF poses to Eritrea.

In a nutshell, he wants Eritreans to swaddle in the Ethiopian flag and fight alongside the Amhara, a group that has never made the faintest gesture towards Eritrea’s rightful sovereignty, a group that has dominated the power in Ethiopia and helmed the bloody wars. The Amhara dream during the day, while their Qtaaws insidiously multiply and become fruitful. The Woyane dream in their sleep, and Dr. Medhanie is feeling insomniac about the group dreaming in their sleep, not about those who dream with their eyes open, not about Alemseged Tesfay’s prophetic drama (The Other War).

I could have quoted other sources to entice Dr. Medhanie to consider how PFDJ is the engineer-extraordinaire in undermining Eritrea’s sovereignty, but I will not. Instead of regurgitating what he knows, I will cite Ibrahim Affa—Ibrahim Affa, the singer, not Ibrahim Affa the fighter. Ibrahim Affa’s lyrics inflame the ethnic problems in Eastern Sudan, miring Eritrea in the tinderbox that Sudan is. Under the approving eyes of a regime obsessed with censorship of everything speech, Ibrahim Affa is given the green light to unleash his hate against the Nuba in Kassala and meddle in the conflict. One of his memorable songs goes like this: “We are Habesh… and our linage expends as far as Iraq, Syria and the Gulf.” I translated these lines for an Arab friend. He was petrified and developed insomnia because of fear that Eritrea would one day invade his beloved region. He plans to establish a confederation with Israel to stop Ibrahim Affa’s imaginative encroachment. If you think my friend’s fear is irrational, you should also think Dr. Mehanie’s claim is ridiculous.

The ethnic card that Sudan played during Al-Bashir’s reign pitted Eritreans against each other, favoring one group by offering some Eumudiya (path to citizenship) and denying it to others. All this is to say that a myriad of issues are at play that may conspire, that one day may fracture the sovereignty of Eritrea more than a group that officially has never wavered regarding Eritrea’s sovereignty. And those issues ought to preoccupy Dr. Medhanie.

PFDJ and its criminal tentacles extend as far as Libya. They have planted the seedlings for organized crimes that will have longevity long after PFDJ’s demise. Even if we temper our dysfunction and eke out a democratic government, these tentacles will be destabilizing agents.

The beneficiaries, the sociopaths that PFDJ has cultivated, will fight tooth and nail to defend their power and wealth. Given these facts that I am sure are not lost to Dr. Medhanie, one would expect a person of his caliber and experience to address these issues, to bring them to the fore so Eritreans can think about, discuss, and prepare for them. Instead, he decided to latch onto this wild-goose chase of the ‘Woyanes are coming!’ Dr. Medhanie is calling from rooftops that Woyane, the encircled Woyane, Tigray, the war-ravaged Tigray, Mekele, the ruined Mekele, the Pompeii of 2020, is a threat to Eritrea, not PFDJ, the fifty-year veteran of havoc, murder, and kidnapping.

The Woyanes are not coming; the Qtaws are.

PFDJ, a self-appointed bestower and abnegator of ethnicity, refuses to officially recognize some Eritreans as an ethnic group; it has told the Elliet that they do not qualify as an ethnic group. Instead, it has, at whim, supplanted them with the Rasshaida. With this track record in mind, brace for a tenth ethnic group in Eritrea: Bhiere Qtaw. Bhiere Qtaw’s eggs have already been fertilized, and PFDJ has hired a midwife.

I want to take Dr. Medhanie back to memory lane: “diqqi hizza alla addalu maassi…” (she is expecting, prepare the mattress) was a hit song when he was in gestation with “The Dynamics of the Eritrean Revolution” and figuring out the graphics to use for his book.

Editor’s note: the byline mistake is corrected to the correct name of the author