What Is the Source of Change in Eritrea? 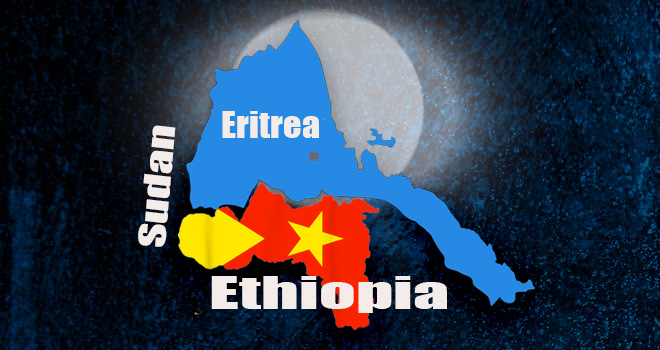 NB: This post was brought from the Awate Discussion Forum, with minor editing to make it readable by the general public/Editors]

In the prayer of the Tewahdos, ብስመ-ኣብ (in the name of God), there is a phrase, እክህደከ ሰይጣን (I reject you Satan). Be happy, I am saying it loud, እክህደከ ኢሳያስ (I reject you Isaias)!!! Voila! Done! I was not an adept of either any way.

We (Eritreans) are losing by stands (መርገጺኻ) and lost in the definitions. ቀዳማይ ጸላኢ ኤርትራ መን’ዩ? ትምልሳ ዶ ኣይትምልሳን? (who is the primary enemy of Eritrea, would you answer that or no?.
We are becoming like sects. You either belong to ‘this or to that’ goes the sectarian classification. ትኽተር ዶ ትምተር (catch 22) was the modus operandi in many parts of Abyssinian land for centuries, and we haven’t moved away from that even at this level of world development. Incidentally, the day before yesterday I was reading some chapters of a book by Karl Gustaf Roden, a Swedish missionary of the 19th century (centered in Geleb), from a book entitled “On the Tigre speaking tribes and missionary works”. He describes his personal observation on how blood and vengeance is so easily established resulting, in not only the end of the immediate family and village, but even the far placed relatives, including the village they live in [who must] pay the price. By the way, this is not specific for Tigre speakers, it was all over the larger region of Eritrea and Ethiopia.

Coming to the interrogation:

What some usually call the “so-called sovereignty” is a sovereignty, and Eritrea is a sovereign country that won independence from Ethiopia, which includes Tigray. We didn’t win independence from Amhara only, but from Ethiopia as a whole. Independence, not because we were the most powerful, or by sheer force, but because we had a reason, conviction and justification like any other African country. TPLF helped to beat the same enemy, first and foremost for its own gain.

I generally agree with Yohannes on certain parts of his lengthy preamble and laying bricks and cement for his final suggestions to working with the Tigray people. The inter-Eritrean problems, however serious, are internal Eritrean problems. No province of a neighbor should be given access to involve itself for change [in Eritrea]. Where are the Tigray people’s organization BTW? The TPLF/ now called TDF? No thanks! TPLF worked arms, legs and teeth for close to 20 years to weaken and undermine Eritreans and erase Eritrea. Fortunately, it didn’t succeed. Did the Eritrean regime weaken Eritrean? Indeed, it did, but not for the same objective. It is a regime that doesn’t have trust in its people. A regime that wants to guide its citizens like a newly blinded person. This unsolicited blind-guide should be fought by the guided or the blinded. Among the blinded are the opposition outside the country. They are blinded by hate of the regime, by the history of the struggle that spilled and is carrying them southward to the original sin (EPLF-TPLF collaboration), which pushed them to find help from another blinder. The southern blinder we know as TPLF/EDF is not a benefactor. It has a Tigray centered designs inside its own country that infringe on Eritrea’s integrity as manifested, not by few, but by significant number of its leading figures and the elite.

Yohannes has concluded about the improbability of internal change pushing him southwards to find a solution from a province of a sovereign nation and many in the opposition have similar prescription. Since I am defining my opinion, I am not convinced a solution is coming from the South (Ethiopia) and its consequences can be far more disastrous.

One of the stumbling blocks for Eritreans to find solutions is the classification, the simplistic black and white view, “who is the primary enemy of Eritrea” and “who is the No 1 friend of Eritrea” classification. That is diverting the Eritrean mind away from Eritrea and its people. We are focusing on our division and the chest beating chivalrous quarrels. Eritreans should find a way of communicating between themselves and bring an end to the perpetual enmity. It is time for original thinking, out of the box, centered on Eritrea and its people. The coming together cannot be based on a plan to remove Isaias and his regime. As long as the coming together is for strengthening Eritrea, it will end up bringing political change. It is better to bet on the unity of Eritreans rather than on the success of outsiders and the disintegration of Ethiopia. Ethiopia’s disintegrating is not an option and will not happen. And there is no basis for any type of Tigrinya speakers’ unification that potentially dominates the region; it has neither basis nor history.

I wish I could give you a blueprint for a change, but I can’t. A blueprint in building a country or in bringing change in a country is an incremental process that takes time to design and shape. A shortcut to that, by involving outsiders, will only be beneficial to the outsiders. Even the one who involves himself by his sheer might recognizes this fact and said recently “this is Eritreans’ call”. Therefore, it is never too late for Eritreans to come together to design their blueprint and make the change they wish.