Posted on March 6, 2019 by Chefena Hailemariam in Articles 241 Comments 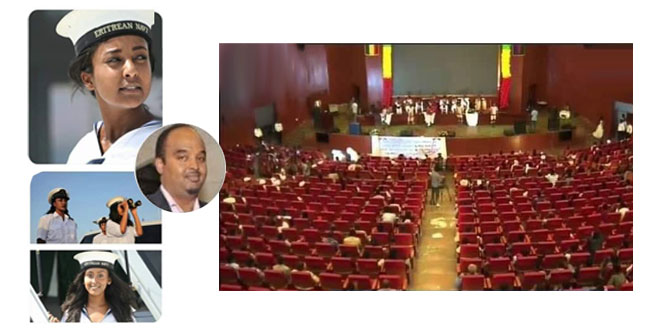 A cultural troupe overflew Mekele, where it could have enjoyed much excitement from bigger and more lively audience. But this 60-person contingent was ordered to impress the Amhara, Isaias’ new allies. The claimed objective of this programme. To ‘celebrate the peace and friendship agreement and develop cultural exchange between the two countries. Far from achieving intended objectives, this project ended in total fiasco. Even the looks of these ‘programmed souls’ reveal how emotionally empty they were.

For all intents and purposes the current situation in Ethiopia purports to selectively provide public space for free expression. Therefore, we are now witnessing the re-emergence of Ankoberite greater Ethiopian narrative that feeds the Amhara expansionist dreams. Bur what is rather bizarre is that some Oromos have now joined in reinforcing such expansionist narrative.  Lemma was not ashamed to openly express his far-fetched hankering to ‘possess’ accesses to the sea, while Abiy Ahmed’s talk hinting to that effect can only be described as ‘a word to the wise’.

Thanks to the modern communication technology we also watched Isaias’ embarrassing flirtation with Amharas and Oromos in his recent successive encounters in Ethiopia. It was embarrassing to watch his hypocrisy oozing out through the armour of empty pride he wore erstwhile. Isaias’ demeaning behaviour, in fact, emboldened Dergue remnants to indulge in misrepresenting the sacrifice and heroism of the Eritrean people’s armed struggle waged to successful liberation of Eritrea.

It is rationale for Eritreans to be alarmed over what has been coming out from Ethiopia’s governments, parties, the media, activists and self-proclaimed political elites. Indeed, PFDJ’s silence is a significant variable in this equation, and no sophisticated calculation is needed to uncover Isaias’ complicity in so far that the PFDJ has not yet countered such narratives with proportional force.

The fundamental element of this problem is the fact that PFDJ abhors institutional arrangements. Key policy documents where official statements are hard to get, conducting any informed analysis based on concrete evidence is difficult. At this very important junction of our history the PFDJ ruling clique has, as ever, effectively blocked us of any information that concerns us as citizens.

In a situation where inter-state relation get abnormally opaque, the general public will understandably try to glean for piece of information in order to acquire insight of the new reality that does not seem to make sense.

Among the very limited source of our information there could be the tasteless interviews of the tyrant. In addition, watching the publicly available video songs sponsored by the PFDJ might help. A close look at the video sponsored and spearheaded by Cultural Affair wing of the party-state would reveal how artistic works are utilized to pursue its grand strategy of manipulating public opinion.

Watching the video clips and taking the content at face value, one is made to believe the part-state is countering the idea of “Greater Ethiopia” that includes sovereign Eritrean. But, as we shall see in the artistic products presented, the contents are not yet contested by rigorous counter-discourse to demolish such a toxic narrative. It is only meant to deceive.

The Corals, the Eritrean Navy, and Ethiopia

It appears that this team was busy through the autumn working on setting the tone of a propaganda project. Its main agenda was to send us the message that PFDJ is still the sole custodian of Eritrean independence and sovereignty.

Koraly/ ኮራለይ is the title of a song. The root word in Italian is “Corallo’ and in English Coral. Hence, Koraly/ ኮራለይ means my own ‘Coral’.

One of the PFDJ operatives in Europe, Sirak Bahlibi twits “fantastic music clip and delighted to appear in the credit roll.”

In his twit he also admits he was happy for the credit he received although he didn’t say what special role he played in the project. But his second twit that goes, “so proud for the few Days spent with Eritrean Navy in Gedem in the outskirts of Massawa!” speaks to the reason why he should be self-congratulating.

That was not all. There is a second video music that is noteworthy. In both videos The Sea is a dominant feature or motif around which the stories revolve. Secondly, the involvement of a major partner, the Eritrean Navy, says a lot. The third and related reason is the sheer cost incurred towards the making of these films. The need for such heavy cost for the filming raises doubts as to why such a huge investment!

The clips in the second song ኦሮማይ (Oramai) an Italian word meaning ‘by now’. Since it has entered the Tigrinya lexicon it may mean ‘not any more’. This video clip depicts scenes starting with a male who protects his love of his life from an alleged abductor from a neighbouring country. The abductor in this case, understandably, being an Ethiopian that wishes to possess her. In this fictional narrative the female symbolizes beautiful Eritrea with its spectacular sea shores. It alludes to the way the fictionalized Eritrean female characters in Amharic novels and songs are referred and reminding the predatory Ethiopian male to stop coveting to win her love. So the lyric goes no more “Fiyamata… no more Fiyorina…”. On the surface, this scene is made to feature the chivalrous Eritrean male protective of Eritrea. Apparently, the morale of this story is Eritrean is no more part of Ethiopia.

But the intended audience of the theme is not definitely Ethiopian public. Instead it is the Eritrean people more specifically its main support base. It, therefore, lacks seriousness and sincerity. By way of mixing arts and propaganda what it does is cleanse and redeem the culprit, the PFDJ system, of its misdeeds.

But this time around it did it in the most unethical way by misappropriating the work of a legendary artist without due credit being given to author. Instead, the producer cleverly obscured the due credit that should have been given to the artist.

Shggey was has been popular since early 1960s. The name of the song is ‘Shggey’ in English means ‘my torch’ and bears a symbol of light and liberty. This is highly ritualized concept among the Highland culture – the lit torch held upwards and moving forward symbolizes the beginning of a new year that ushers in prosperity and happiness. It is associated with craving for Eritrean independence so powerful that it invokes melancholic memories relating to the abrogation of the federal arrangement and the clip vividly depicts the mood of the moment.

Perhaps the young artists needed to request to make an improvisation of the original song before appropriating it, by making it publicly available on the internet. Illegally appropriating a work of art belonging to a legendary singer, who is still alive, and without even making the due acknowledgment is indeed grave. It is most likely that the young artist was simply provided with the resource and may claim that he was operating under the guidance and instruction of the (PFDJ) Departments of Cultural Affairs.

Then enter Asgedom.  The goodwill he had accumulated over forty years was to be squandered in a matter of three days. The tag attached to his name (whatever its real value) along with and celebrity status had earned him a cultural capital big enough to be envied by his contemporaries of the generation of the 1960s.

Unfortunately, his new year’s song ‘Selam’ celebrating the Abiy-Isaias dealing brought about his disgrace. It was nothing but a piece of sycophancy in the service of PFDJ. With the freely acquired clips from the Eritrean official media outlets, embellished with the gaudy Eritrean flag it is more of dull propaganda material than an artistic work. The level of public disgust could be observed from the extraordinary disapproval rated by the number of dislikes he was awarded. Nothing can be more revealing.

Now add to this what the Twitter-Eritrean-Ambassador in Japan, said very recently.

Why would one choose such a convoluted statement at the expense of clarity and sincerity unless they have something to hide? This can only be left for readers to guess. But it is appalling to note that one dares to waffle on and vulgarize an issue that lies at the very core of our existence as citizens. In effect, this twit helps to normalize the Amhara chauvinists’ views thereby, transforming what was a taboo to be promoted into a minority view. An important conceptualization, the Twitter Ambassador missed is that nations are in fact imagined communities. According to Benedict Andersons’ highly quoted book (Cited by 94,443) nations are imagined communities. What that means is that the nation, as a geographic and political entity, exists in the minds of each member of this political community and that it makes the basis of their national consciousness. In deed our Twitter Ambassador may need to get educated in that respect to understand how nationalism, such as that of Eritrean nationalism, grows.

As we move into a significantly changed political realities, new regional relations and shifting alignments we in the justice seeking camp ought to be watchful enough to go after the PFDJ’s machinations and expose its deceptive narratives. It is time that we seize the momentum for change to undo the false consciousness that PFDJ is a defender of our sovereignty. The regime prefers deliberate ambiguity over clarity and seriousness on major issues of national importance.  As its track records show, there has always existed a mismatch between its rhetoric and practice, between its covert policy of widening the existing crack within the Eritrean society on the one hand and preaching unity on the other. The people are speaking, and no amount of drama authored by PFDJ con-men can mask the satanic intents of their master. According to the way the Eritrean nationalist narrative is playing out now, there exists a role reversal taking place – the once self-styled patriots turned traitors. Shame on those who are betraying our martyrs and the very cause they gave their lives for!

References
The twit below is deceptive, they are not members of the navy but diaspora actors shipped to play the propaganda role.

2. https://www.youtube.com/watch?v=JkZbJvpy6NA
3. Anderson, B. 1983. Imagined Communities: Reflections on the Origin and Spread of Nationalism. Verso